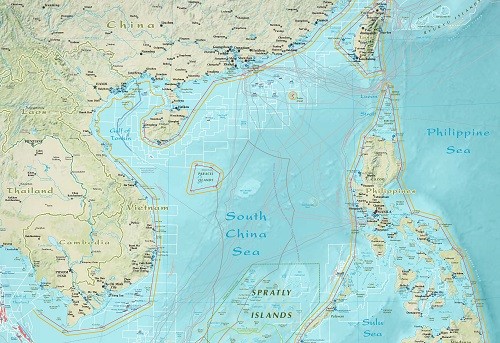 TAIPEI (Taiwan News) -- The U.S. State Department expressed its concern yesterday (July 20) over China's disruption of its neighbors' gas and oil operations in the South China Sea, coming a day after Vietnam ordered the withdrawal of a Chinese survey ship conducting operations in the country's exclusive economic zone.

In a statement, the State Department said Chinese interference not only "threaten(s) regional energy security" but also "undermines the free and open Indo-Pacific energy market." It also condemned China's reclamation of artificial islands in the South China Sea, which it has since been militarizing despite China leader Xi Jinping's pledge in 2015 not to do so.

The statement comes on the heels of Vietnam's demand that a Chinese oil exploration ship leave Vietnam's 200-mile exclusive economic zone, where it had been conducting survey operations, according to The Straits Times. The ship, which was identified as the Haiyang Dizhi 8, had been lurking there for several days with three armed escorts purportedly belonging to the Chinese coast guard, resulting in a standoff with nine Vietnamese patrol vessels.

Vietnam Foreign Ministry spokesperson Le Thi Thu Hang said Vietnam had lodged protests through multiple channels and that the incursion infringed upon the 1982 United Nations of the Law of the Sea (UNCLOS), which grants coastal countries "sovereign rights for the purpose of exploring, conserving and managing the natural resources ... for the economic exploitation and exploration of its (exclusive economic) zone," reports VnExpress.

China claims most of the South China Sea as its own, putting it at odds with overlapping claims of neighbors, including Vietnam, the Philippines, Indonesia, Malaysia, Brunei, and Taiwan. Chinese vessels have been involved in a number of disputes recently, in which they have also been accused of illegal fishing and aggressive behavior.