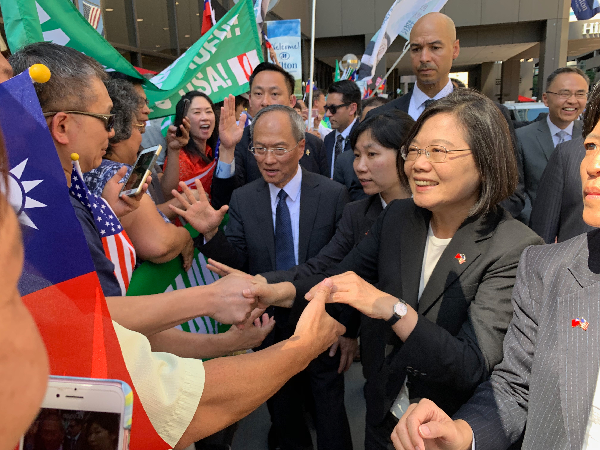 DENVER (CNA) -- President Tsai Ing-wen (蔡英文) was welcomed by hundreds of cheering overseas Taiwanese compatriots as she arrived Friday in the U.S. city of Denver, the last stop of her 12-day state visit to four Caribbean allies.

Following a six-hour flight from St. Lucia, Tsai's delegation arrived in Denver at around 3 p.m. Friday local time and was received by American Institute in Taiwan (AIT) Chairman James Moriarty and Taiwan's top envoy to the U.S. Stanley Kao (高碩泰).

Prior to Tsai's arrival, hundreds of overseas compatriots from different parts of the U.S., such as Florida and Los Angeles, had already gathered outside the Hilton Denver City Center where the president will be staying.

Many passionately waved the national flags of Taiwan and the U.S., as well as the Democratic Progressive Party (DPP) party flag, while others held banners bearing "Taiwan" or other slogans such as "freedom and democracy, safeguard Taiwan."

"This is by far the biggest event in history for Denver's (overseas Taiwanese) compatriot community...We are so happy that President Tsai could make a transit stop here to see us. We also want to cheer for her," said Wang Chien-feng (王劍峰), vice president of a Taiwanese association in Denver.

In addition to overseas Taiwanese, about a dozen Chinese protesters were seen demonstrating near the hotel, waiving China's national flag and chanting "one China." However, no clashes occurred.

During her two-night visit to Denver, Tsai is slated to meet with U.S. Senator Cory Gardner and Colorado Governor Jared Polis, and will host a banquet for overseas compatriots Friday evening.

On Saturday morning, the president will visit the National Center for Atmospheric Research (NCAR), which was responsible for developing FormoSat-7, the second satellite constellation jointly built by Taiwan and the U.S. after FormoSat-3.

FormosSat-7 was sent into orbit from the John F. Kennedy Space Center in Florida on June 24 to replace FormoSat-3 to collect meteorological, ionospheric and climate data.

At the NCAR, Tsai will be met by center director Everette Joseph and other senior scientists.

She will then have lunch with Gardner and visit the National Renewable Energy Laboratory (NREL), a U.S. federal laboratory dedicated to renewable energy development, in the afternoon.

Tsai left Taiwan on July 11 for the 12-day trip that has taken her to New York, Haiti, St. Kitts and Nevis, St. Vincent and the Grenadines, and St. Lucia.

She will leave Denver and arrive in Taiwan on July 22.

Supporters lined up in support of President Tsai (CNA photo)