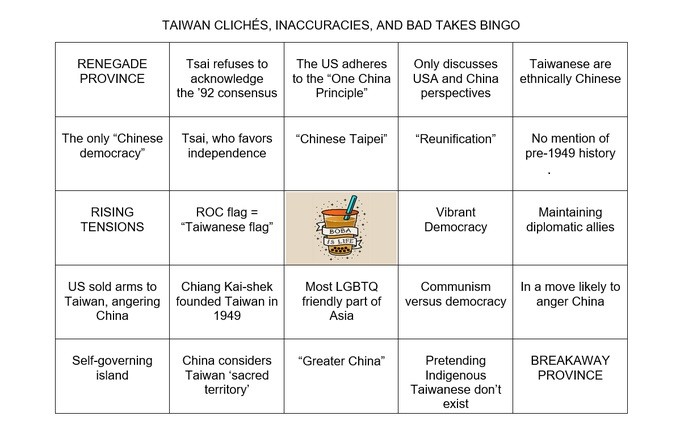 TAIPEI (Taiwan News) -- In anticipation of the standard disinformation spewed forth by Chinese state-run media and its regurgitation by Western media outlets over the latest arms sale to Taiwan, a researcher at the University of California, Irvine created a bingo game including all the clichés, propaganda, falsehoods, and tired tropes about Taiwan.

On July 8, news broke that the U.S. State Department had approved a plan to sell US$2.2 billion dollars worth of M1 Abrams tanks, Stinger missiles, and other weapons and equipment to Taiwan. The announcement came just as Taiwan President Tsai Ing-wen (蔡英文) prepared to transit through the U.S. on her way to visit the country's diplomatic allies later that week.

In anticipation of the tsunami of deception, fabrications, and falsehoods that the Chinese government would issue forth in response, and the Western media's eager parroting of this fiction, UC Irvine Ph.D. candidate in Political Science Lev Nachman, 27, created a humorous bingo game to act as a primer for the uninitiated. On July 10, Nachman took to Twitter to write that in light of the latest arms sale and Tsai's visit to the U.S., he had created a "Taiwan clichés, inaccuracies, and bad takes" bingo card.

Nachman, a Fullbright research fellow in Taiwan, told Taiwan News that given the weapons deal, Tsai trip, and how "bad some of the Anglophone reporting on Taiwan can be," he was inspired to create the bingo card. Nachman said that he put the spoof game together "both for Taiwan watchers to share in my frustration but also to help highlight to non-Taiwan watchers some of the cliches and inaccuracies they should try to avoid." In the case of the arms sale, the standard copy from all of China's state-run mouthpieces would read: "In a move likely to anger China, the U.S. is planning to sell US$2.2 billion dollars worth of Abrams tanks to the self-governing island of Taiwan, which China considers to be a renegade province that must be reunited with the mainland, by force if necessary."

As for Tsai's trip to the U.S. and its diplomatic allies, Beijing's media machine would write: "In a desperate attempt to maintain the last of Taiwan's diplomatic allies, Tsai, who favors independence and refuses to acknowledge the 1992 consensus, will be transiting through the U.S., angering China and raising tensions between the U.S. and China over the failure of the U.S. to properly adhere to the "one China" principle with the breakaway province."

In their version of the news report, all major Western media outlets would then pay brief lip-service to Taiwan being the "only vibrant democracy in Greater China, which was founded by Chiang Kai-shek in 1949 and is the most LGBTQ friendly part of Asia." The article would then conclude by repeating Beijing's mantra that "China considers Taiwan to be a renegade/breakaway province that must be "reunited" with China, by force if necessary."

With the arms sale to Taiwan and Tsai's upcoming trip to the US, I went ahead and made a "Taiwan clichés, inaccuracies, and bad takes" bingo pic.twitter.com/mRh2n233Lo 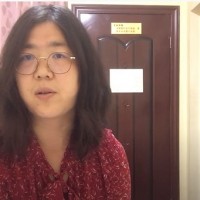