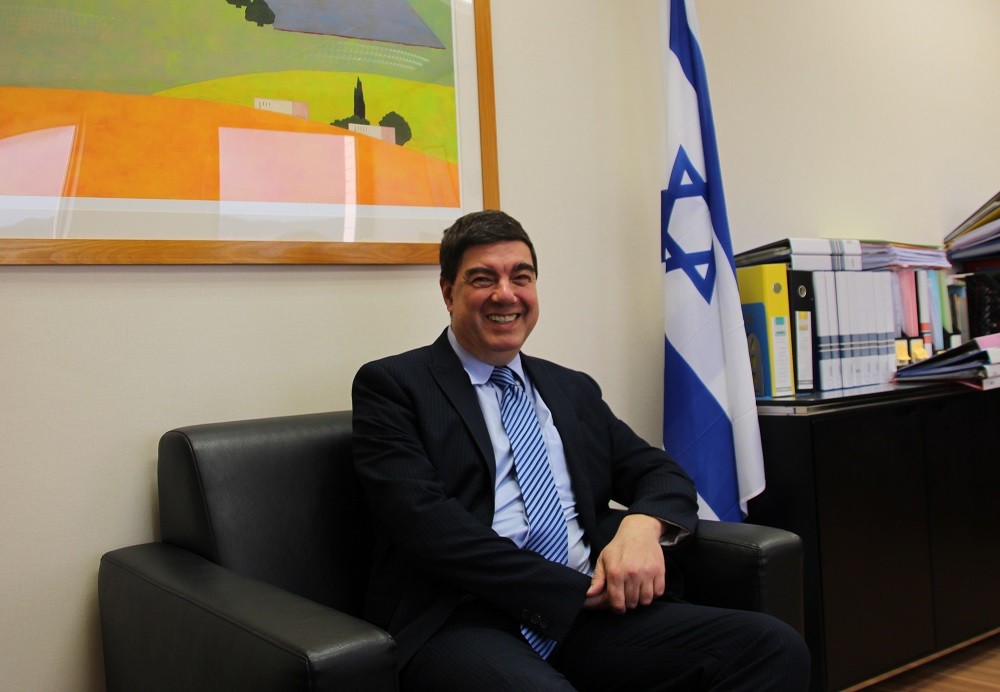 TAIPEI (Taiwan News) -- The Israeli envoy to Taiwan, Asher Yarden, has been serving as the chief of the Israel Economic and Cultural Office (ISECO) in Taipei since summer of 2015. After four years of promoting ties between Taiwan and Israel, his tour of duty will be coming to a close in early August.

As Yarden prepares to return to his home of Jerusalem, Taiwan News was able to catch up with him for a brief interview. In the interview, conducted on Wednesday (July 17), Yarden shared his experience in Taiwan and his insights on the state of relations between the country and his own.

Taiwan News (TN): Hello, thank you for taking the time to do this interview. First, how long have you been serving as the Israeli envoy to Taipei? What was your impression of Taiwan when you first took up the post, and how has that impression changed over the past few years?

Well, I began serving in Taipei from July 2015, and I was very happy that I had been given the opportunity to serve the foreign ministry here. From the first day I arrived, I recall there was a nice vibe in the air here. I felt very content and was deeply impressed, first and foremost, with the wonderful people here in Taiwan. Also with the safety and beautiful scenery all around the island.

I have definitely developed a strong attachment to Taiwan. This is a very dynamic and interesting place. It feels like my time in Taiwan has passed very quickly. It is surprising to think that four years have gone by. I can tell you this clearly, Taiwan has far exceeded my expectations, and I knew it was going to be an excellent experience from the very beginning.

TN: Have there been any significant developments in Taiwan-Israel relations during your time as representative in Taipei?

Yes, yes, Israel and Taiwan really have established solid relations in recent years. We have seen a lot of great developments during my time serving here. The most significant development, and one that I am very proud I was able to witness and contribute to, was Taiwan's adoption of the International Holocaust Remembrance Day.

Under the Ma administration, Taiwan began commemorating the day on Jan. 27, 2016, and has continued to honor the occasion with an official state address every year since under the Tsai administration. I really praise the leadership of Taiwan's government for taking an active role in promoting this. Witnessing and being part of this event attended by the President in my first year here was really very moving and a wonderful memory that I will cherish.

Another highlight of the past few years was the Taiwan International Book Exhibition, where Israel was the special country exhibit. This was a great event that really showcased Israeli culture and creativity.

Taiwan has also increased its presence in Israel. The Taiwan External Trade Development Council, or TAITRA, recently opened its 63rd overseas trade office in Tel Aviv in February. This highlights the continuously improving economic ties and potential of Taiwan-Israel relations. Likewise, with both countries heavily invested in pursuing new technologies, Taiwan's Ministry of Science and Technology now has a permanent representative office in the country as well, one of only 16 such offices worldwide.

TN: What kinds of activities or programs has ISECO sponsored or assisted with in Taiwan during your time here?

Well ISECO wants to increase Israel's profile here in Taiwan, and to do that I have been pushing for more publications in Chinese on Israel and Judaism, as well as translations of works by popular Israeli authors. I think the book exhibition in 2018 was a great showcase of our efforts to promote Israel's culture in Taiwan.

During my years here, we have had some really great publications made available for Taiwanese readers, including novels, travel guides, cookbooks, children's books, and of course books on history, religion, and politics. I even had the honor of writing the forward for several of these translated publications. TN: What have been some of your most memorable experiences during your time in Taiwan?

There have been so many great experiences, but as I mentioned, being here to see Taiwan commemorate the International Holocaust Memorial Day for the first time in 2016 was very special to me.

Another memory that stands out was this past May, on the eve of Israel's 71st Independence Day. I saw lights on Taipei 101 light up to show the Israeli flag and share a "Happy Birthday" message in Hebrew and in Chinese. That was very special to me and to every one here at ISECO. Israel's participation in the Taipei book exhibition was really a great time. We had over 15 guests from Israel flown in for the event, with special events, traditional food, and even traditional folk music that brought so much enjoyment, getting everyone to dance. That was a great time.

Then of course, there were my travels all around Taiwan. I have seen so much of this beautiful country, the mountains and coastlines. I will never forget Taroko Gorge. It is just incredible scenery all around. But really, I can tell you, what always made the travel better is without a doubt the amazing people of Taiwan. Everywhere we went, no matter their background, Taiwanese people have really impressed me with their kindness.

Like I mentioned, relations right now are very good. On a cultural level there is definitely increasing interest in both directions, because I think both have a lot in common. Business ties between the countries are improving rapidly, and tourism has also been increasing. But bilateral tourism has not been increasing as quickly as I would like.

Hopefully, in the coming years, an airline might see the benefit in providing a direct flight between Taipei and Tel Aviv. In my view, this could really boost tourism potential in both countries. I would like to see more Taiwanese tourists and businessmen come to Israel. We invite everyone to visit Israel. You really should come see what a beautiful place it is.

TN: You mentioned that Taiwanese society and Israeli society have a lot in common? Can you elaborate on that?

Well, we often refer to Israel as a “start-up nation,” and you could say Taiwan really shares that characteristic. Taiwan is an impressive democracy that has thrived in a political environment that has been very challenging. In a similar way, Israel has also prospered despite a harsh political environment. While Taiwan is an island geographically, with a near-constant threat from a powerful neighbor, in Israel's situation, it may also be considered an island in a cultural sense and in many ways an economic sense as well.

From my perspective, I think these similarities have led to an appreciation and admiration among Taiwanese people for Israel's situation, and the same for the Israeli people's view of Taiwan. In the case of both Taiwan and Israel, 70 years ago I don't think anyone on Earth could have guessed how prosperous and democratic they would become given their respective situations. Today, we see two countries that each have a positive global impact that is very disproportionate to their size and population. This is very remarkable. TN: Are there many Taiwanese companies investing in Israel currently? Do you expect that to change anytime soon? Why or why not?

There are quite a few companies in Israel. Moving forward, I see great trade potential between the two. Currently, Taiwan is Israel's 17th largest trading partner, with bilateral trade measuring about US$1.6 billion last year and increasing steadily. The trade relationship is also very balanced, with Israel selling only slightly more to Taiwan than the other way around.

Taiwanese companies in Israel are also very diverse. There are many small and medium-size enterprises with good market shares in a variety of competitive industries, which is very good for growth prospects.

As we both pursue cutting-edge technologies, Israel is providing expertise and quality products in terms of software programs and applications related to autonomous vehicles, fintech, cyber- security. Meanwhile, Taiwan is a great source of component manufacturing for a lot of new tech. But Taiwan is also becoming less and less reliant on manufacturing, and is in a place to begin branching out into IoT and AI-related products. I would say there is a very synergistic relationship with a lot of potential for future partnerships.

TN: After you finish your tour of duty in Taipei, will you continue in the foreign service? Or do you plan to retire or pursue a new direction outside of government? Will you ever return to Taiwan for a visit?

Well, after I return and have a short rest, I will report to the Ministry of Foreign Affairs and see if they have a new position in mind for me. But I can also say that I am looking forward to returning and spending some time with my family in my hometown of Jerusalem.

Although at the same time, as much as I am looking forward to returning home, I feel like I am equally unprepared to leave Taiwan. This has been an exceptional place to live, and I have had so many great experiences here. As for returning to Taiwan, I would say there is a very good chance I will find time to visit Taiwan again.

TN: Any comment on cross-strait relations? Are you optimistic about Taiwan's future, either economically or politically?

I certainly am optimistic. While Israel officially maintains the One-China policy, our relationship with Taiwan continues to strengthen economically, culturally, academically, and in many other ways. This is only going to continue. Taiwan is a wonderful, dynamic place with a lot of potential.

I have witnessed some dramatic political shifts in my time here, and it is difficult to say what may happen in the future. But I believe that what is going on here with cross-strait relations is really one of the most significant issues in the world today.

My experience and impression of Taiwan has certainly exceeded my own expectations. And I hope for the brightest of futures for Taiwan and its relationship with Israel.

Taiwan has been like a second home to me, and I am thankful to the people of Taiwan for showing my family such hospitality during our time here. If there are four words to describe Taiwan, I would say “beautiful island, beautiful people.”

Mr. Yarden, thank you very much for doing this interview, and thank you for your service and support for Taiwan. Taiwan News wishes you all the best in your future endeavors. Independence Day message to Israel on displayed on Taipei 101, May 8, 2019 (photo courtesy of ISECO) 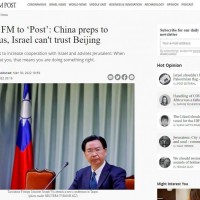