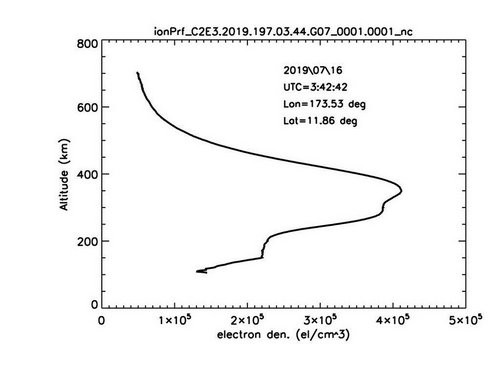 Taipei (CNA)-- Taiwan's FormoSat-7 has sent back its first batch of data from space, which will be released to the public in seven months' time, the National Space Organization (NSPO) said Wednesday.

"Yesterday, FormoSat-7 for the first time transmitted information about the Earth's atmosphere and ionosphere, which was retrieved by the research team today," the NSPO said.

The NSPO said it will continue to conduct tests to improve the radio occultation techniques, radio frequency beacon and ion velocity meter to maximize the efficiency of the satellite.

FormoSat, the second satellite constellation jointly developed by Taiwan and the United States, was launched at Kennedy Space Center in Florida on June 24.

It replaced FormoSat-3, the first satellite constellation jointly developed by the two countries, to collect meteorological, ionospheric and climate data.

While Formosat-3 is the world's first satellite to collect weather data through radio occultation techniques, Formosat-7 is expected to collect three to four times more data, the NSPO said.

Formosat-7 receives about 4,000 signals per day from the U.S. Global Positioning System (GPS) and the Russian Global Navigation Satellite System, while Formosat-3 receives about 2,000 GPS signals, it said.

Formsat-7 will become the "most accurate barometer in space" able to detect typhoons, monsoons and other severe weather, according to the NSPO.