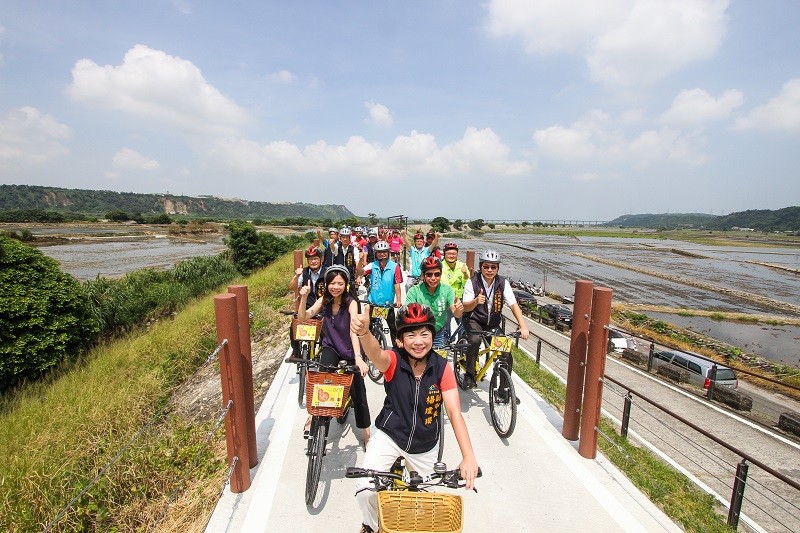 The Jiahou Line Bikeway connects the city’s Dajia and Houli districts and includes the Liufen Road (六分路支線) and Lotus Valley (忘憂谷支線) branches that extend to Waipu District, forming a bikeway network connecting to other bikeway systems in the city and allowing cyclists to roam around the city's countryside, CNA reported.

New Power Party Legislator Hung Tzu-yung (洪慈庸) has played a vital part in facilitating the creation of the bikeway by helping to secure a subsidy from the Sports Administration that represents 60 percent of the construction costs, the news outlet said. During the inauguration ceremony, Hung said she hoped the completion of the bikeway network would boost Taichung’s tourism and provide both residents and visitors with quality sport and recreation spaces.

The mainline of the Jiahou Line Bikeway goes along Jiahou Road and is 16.97 km in length, connecting the city’s biking paths near the mountains with the coastal ones. The west side of the bikeway connects with the Cycling Route No.1, while the east side connects with Dongfeng Bicycle Green Way (東豐自行車道綠廊) and the new TRA Taian Station (泰安新站).

The 5.63 km Liufen Road branch passes through Waipu District, connects with the Yuemei West Road bikeway, and ends by connecting back to the mainline of the Jiahou Line Bikeway, forming a loop.

The Lotus Valley branch is 12.6 km in length, including a 2 km stretch that goes along the top of a river dyke.