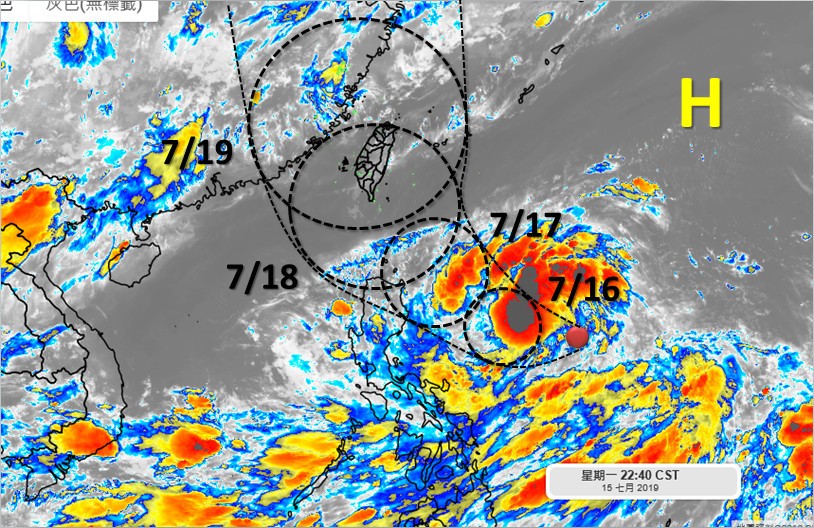 TAIPEI (Taiwan News) -- A tropical depression which is expected to intensify and become Tropical Storm Danas today is predicted to come closest to Taiwan on Thursday (July 18) and Friday (July 19).

The Central Weather Bureau (CWB) said that a tropical storm sea warning could be issued as soon as tonight (July 16) or Wednesday (July 17). By Wednesday, the CWB predicts that the storm will begin to bring showers to eastern and southern Taiwan and by Thursday and Friday, rain will be likely across Taiwan.

As of 2 a.m., the Central Weather Bureau (CWB) said that the tropical depression had a radius of 99 kilometers and was located 950 kilometers southeast of Taiwan's southernmost tip of Eluanbi, and moving west at a speed of 21 kilometers per hour (kph). It was packing maximum sustained winds of 54 kph with gusts of up to 82 kph. The CWB estimates that the storm system will come closest Taiwan on Thursday and Friday. The extent to which it will impact land depends on the degree of the weakening of the Pacific high-pressure ridge.

Danas could first approach northern Luzon in the Philippines or the Bashi Channel on Wednesday. On Thursday, as the Pacific high-pressure ridge weakens, it will gradually turn northward.

However, the diversion flow is complex and the path variables need to be continuously observed. The greater the northward turn, the closer Danas will come to Taiwan, which is key to determining whether it will make landfall in the country or not. According to the latest models by the European Centre for Medium-Range Weather Forecasts (ECMWF) and the United States Global Forecast System (GFS), the tropical depression could penetrate the heart of Taiwan. CWB forecaster Lin Ding-yi (林定宜) said the direction and speed of the tropical depression has not changed much and there is a chance that a tropical storm warning could be issued for the sea sometime tonight or tomorrow morning.

Lin said that today Taiwan will see partly cloudy to cloudy skies, with little precipitation in the morning, but thunderstorms are likely in the afternoon. Due to the sizzling temperatures today, the CWB has issued a heat advisory in 19 counties and cities in Taiwan, with only Keelung and Yilan spared from the heat alert thus far.

The mercury is expected to soar over 36 degrees in many areas today. Due to the sweltering temperatures and high UV index, the CWB advises those who are engaging in outdoor activities today to apply plenty of sunscreen and to stay hydrated. On Wednesday, the CWB predicts that there will be thunderstorms in Hualien and Taitung, brief showers in Yilan and southern Taiwan, and cloudy skies in the rest of the country. On Thursday and Friday, the tropical storm should come closest to Taiwan at which time rainfall is likely across the country, particularly in eastern and southern Taiwan.