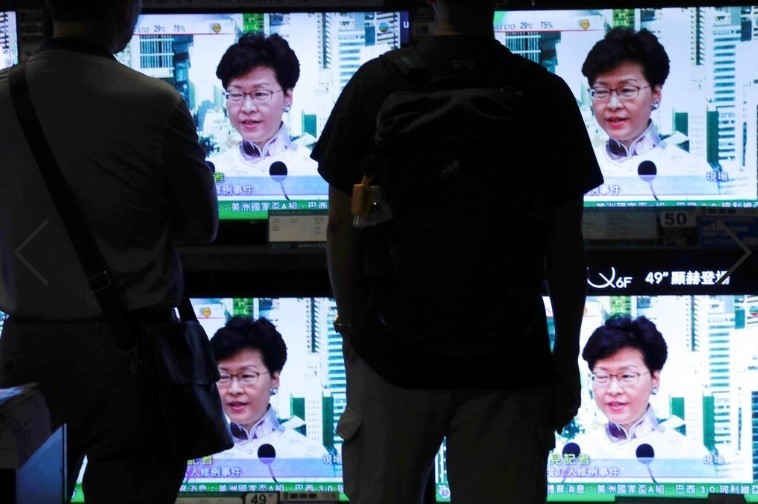 TAIPEI (Taiwan News) – The Financial Times reports that Hong Kong Chief Executive Carrie Lam (林鄭月娥) has offered to leave her post on many occasions but has not been allowed to do so by her overseers in Beijing.

The report cites two anonymous sources who claim that Lam offered up her resignation numerous times but was rebuffed by Chinese officials. According to the Financial Times's sources, Lam has been urged to stay on because “no one else can clean up the mess and no one else wants the job.”

Lam has been under immense pressure as the extradition bill she proposed, which would allow Hong Kong citizens to be tried in China, led to mass protests with approximately 2 million people taking to the streets. The chief executive maintains that the bill was her idea, not a request from Beijing.

According to another Reuters report, Hong Kong academic Shiu Hing Lo (盧兆興) believes Lam would not be able to resign of her own volition. The authorities in Beijing would need to weigh their options and find a suitable replacement before allowing her to leave.

Lo said that Beijing hopes to have Lam deal with the aftermath of the failed extradition bill before she can step down. Regardless, Lam is almost certain to leave before the September 2020 legislative elections.

Analysts believe that Lam may have dashed Chinese President Xi Jinping’s (習近平) grand plan for complete reunification with Hong Kong for the time being and that it will now be increasingly more difficult to introduce Chinese laws to the territory.

Hong Kong saw even more protests on Sunday (July 14), as thousands marched in Sha Tin in Hong Kong’s New Territories. More than 40 people were arrested during clashes between protestors and police, and those on both sides suffered injuries.