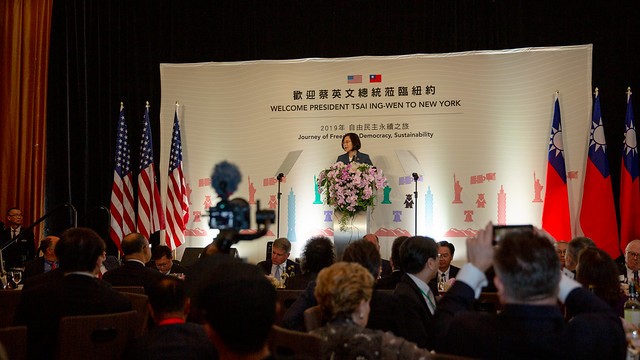 A member of the delegation accompanying the president on her Caribbean trip, the deputy secretary-general revealed the information with the traveling press corps on the flight en route to Haiti. Wrapping up her stay in New York for two nights, President Tsai continued her tour in Caribbean allies on July 13.

During the phone meeting, President Tsai expressed her gratitude to Pelosi for supporting Taiwan, and to the U.S. Congress for having passed several bills in favor of Taiwan in recent years.

The phone call was made on July 12, after President Tsai had a breakfast meeting with Richard Armitage, former U.S. Deputy Secretary of State.

On the same day, Taoyuan Mayor Cheng Wen-tsan (鄭文燦) of the Democratic Progressive Party (DPP) met with Pelosi in person while visiting Washington D.C. Cheng mentioned that during his previous trip to the U.S. capitol building, he was received by a representative of Pelosi’s office. The mayor thanked the house speaker for welcoming him in person this time.

President Tsai also had a bilateral meeting with U.S. house representatives and senators later in the evening, according to the deputy secretary-general.

President Tsai said during the meeting that the Taiwan-U.S. relations are at an exceptionally good state. She looks forward to seeing closer and more substantive cooperation in building a sustainable partnership with the U.S.

With regards to reports suggesting that a number of U.S. assistant secretaries of state had traveled to New York to meet with President Tsai, the deputy secretary-general said it was misinformation. The president’s transit plans in the U.S. have been made based on mutual trust and past experience, said Tsai Ming-yen, urging the media not to exaggerate the matter.