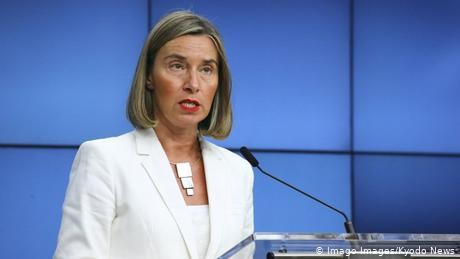 Federica Mogherini, the European Union's High Representative for Foreign Affairs and Security Policy urged the international community to contribute more in development and security in the Sahel during a visit to the region this week.

"It's really what can make the difference, because we face a terrorist threat," she told DW in an exclusive interview during her visit to Niger on Thursday.

She noted that if the state becomes less present in large parts of the Sahel, it could leave the door open for "Islamic State" (IS) terrorists to move in following defeats in Syria and Iraq.

"And we definitely do not want Daesh in another place where they can build their territorial power," she said, using an Arabic acronym for IS.

Mogherini said that the EU is supporting efforts to combat terrorism and boost security in the region, carrying out training operations in Niger and Mali.

"It would also be good to have others on our side in doing this, because it's not only for us a problem, it's a problem for everybody," she said.

In addition to combating terrorism, the EU's top diplomat also implored other countries to join the EU in helping local governments fight climate change and boost economic and social developments.

Mogherini, whose term as EU foreign policy chief will end in October, also offered up advice for her successor with regards to policy on the African continent.

"Africa is a big continent," she said, adding that it "first and foremost" needs economic development as well as digital infrastructure, good governance and human rights.

"So don't consider Africa only as a partner when it comes to migration. All this work needs to be sustained over the time," Mogherini said, referencing the EU's efforts to stem the flow of migration to Europe through a range of agreements with African countries.

"Don't think that if the numbers of the arrivals go down, then you can turn the page and move to other priorities. This is a continent that needs attention to be there for decades and centuries probably," she added.

The EU has taken in an increased interest in development and cooperation with African leaders in recent years, particularly in the Sahel region. Poverty and conflicts have displaced millions of people and are some of the main drivers of migration to Europe.

This interview was conducted by DW's Catherine Martens in Niger.