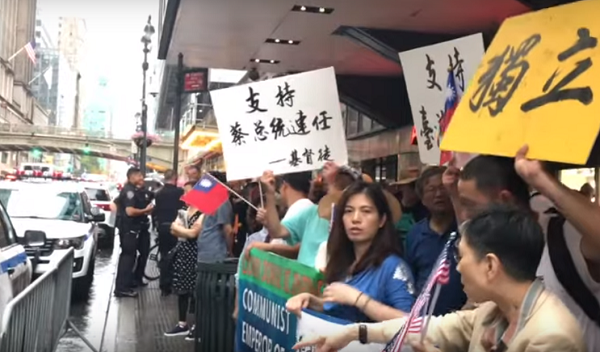 TAIPEI (Taiwan News) – Taiwan’s President Tsai arrived in New York on Thursday (July 11) and was greeted by a crowd of supporters and well-wishers outside her hotel while a crowd of angry Chinese protestors awaited across the street.

A scuffle ensued as the president’s motorcade arrived at the Grand Hyatt in the city, as supporters of Taiwan and the agitated Chinese protestors confronted one another. The short brawl resulted in at least one injury and one arrest according to reports.

Liberty Times reports that President Tsai arrived at the hotel in Manhattan around 4:30 p.m and was greeted by an enthusiastic crowd welcoming Tsai and showing their support for Taiwan.

New York City Police had separated the two groups on opposite sides of New York’s 42nd Street. However, shortly after Tsai’s motorcade arrived, a small number of persons waving Chinese flags crossed the street and began harassing the pro-Taiwan crowd. A Twitter user was recording as the scuffle began.

Videos uploaded to YouTube show some of the scuffles, one showing an agitated man wildly waving a large Chinese flag in the crowd. Another video shows a group assaulting a Taiwanese supporter, which results in one individual’s arrest by NYC Police officers.

President Tsai later stated that she was not aware of any violence at the time of her arrival to the Grand Hyatt Motel, reports Liberty Times.