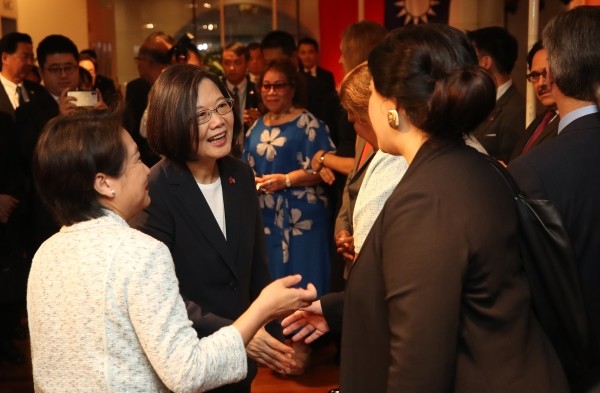 TAIPEI (Taiwan News) -- Taiwan President Tsai Ing-wen made history on Thursday (July 11) by being the first Taiwanese president to meet with permanent representatives to the United Nations of the country's diplomatic allies for the first time in New York and the first time at Taiwan's de facto embassy there.

Tsai on Thursday began a 12-day-11-night tour to visit Caribbean diplomatic allies titled 'Tour for Freedom, Democracy and Sustainability,' which will include visits with Haiti, Saint Kitts and Nevis, St. Vincent and the Grenadines, and St. Lucia. Tsai is currently transiting through New York and will pass through Denver on the way back to Taiwan. Diplomats familiar with the matter told CNA that Tsai's itinerary holds significance in two important ways. First, it is not only the first time a Taiwanese president has met with permanent representatives to the United Nations of Taiwan's diplomatic allies in New York, where the UN is headquartered, but also its ally St. Vincent and the Grenadines, with whom Tsai will meet, last month secured a seat as a non-permanent member on the UN Security Council.

In addition, this is the first time that a Taiwan head of state has held a public event in its de facto embassy in New York City. This may raise the hackles of Communist China, who may cry foul at the attendance of foreign leaders at the event.

On July 12, Tsai is slated to attend a Taiwanese-American Business Summit jointly organized by the US-Taiwan Business Association (USTBC) and the Taiwan External Trade Development Council (TAITRA), which will be chaired by USTBC President and NASDAQ Chairman Michael Splinter. Heavy-hitting American business leaders will be present, including executives from Micron Technology, Citigroup, GE, and Corning, reported CNA. Later that afternoon, Tsai will also hold closed-door talks chaired by Dr. Andrew Nathan with a number of Columbia University scholars and graduate students, according to the report. After the symposium, Tsai will attend a dinner for overseas compatriots in New York and give a speech.