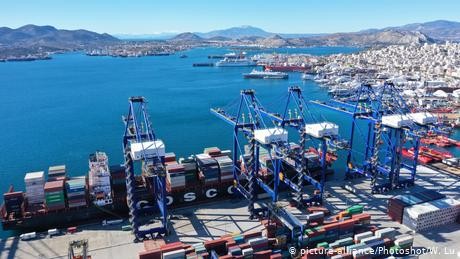 It was good news for China: The conservative New Democracy (ND) party won last week's parliamentary elections in Greece, and on Monday the 51-year-old business-friendly Kyriakos Mitsotakis was sworn in as prime minister. "Starting today, we begin a difficult struggle," Mitsotakis said in his victory speech. "We're going to roll up our sleeves.”

Between 2008 and 2014, Greece lost a third of its gross domestic product. Its debt to GDP ratio is still 170 percent — the highest by far in the eurozone. Some 500,000 people have left the country since 2010; over 90 percent are university graduates. Greece still has billions of euros worth of debts and it will take decades to pay them off. The current economic growth rate of 1.9 percent offers little comfort. Athens is dependent on big investors such as China.

ND has always been China-friendly

It may have been the outgoing leftist Syriza government that ensured Greece would become the first developed industrial nation to participate in China's New Silk Road project. And it was under former Prime Minister Alexis Tsipras in April that Greece joined the "16+1" initiative, with which China is developing its investments in Central, Eastern and Southeastern Europe. But it was the ND which laid the foundations for Greece's China-friendly foreign policy when the party was in power between 2004 and 2009.

These ties were especially important when it came to the port of Piraeus, a key element of China's Belt and Road Initiative. China invested in the port when the European Union had lost interest in Greece. This decision seems to have paid off. Within 10 years, China's global shipping carrier Cosco has turned the ailing container hub into the fastest growing port in the Mediterranean. It is China's gate to Europe — the first deepwater harbor that container ships from Asia reach after passing through the Suez Canal. From here, goods can be directed to other ports on smaller freight ships or transported by rail to Central Europe via the Balkans. China is investing heavily into rail lines, too.

Since 2016, Cosco has been the majority owner of the port. And it has big plans for the future, hoping to boost tourism with a new terminal for cruise ships, an 8,500-ton syncrolift, as well as four luxury hotels, two parking lots and a shopping mall. The idea is to attract China's growing middle class to Greece.

Greece's outgoing government was not entirely pleased with Cosco's plans. At the beginning of March, the country's Port Planning and Development Committee put a stop to its development for the foreseeable future. The government declared that the land had "archaeological interest" and argued that the high-end mall and hotels would damage local business. It said that higher rents and more automation would do the same. Before becoming prime minister, Tsipras had fought against the privatization projects, saying rather dramatically that Piraeus would transform into a "port of agony" — though it was during his tenure that Cosco became majority owner of that very port.

His successor Mitsotakis is more likely to try to remove even more hurdles for China. He will want to show Beijing that Greece can be a stable partner in Europe. China already has a foothold in Greece's electricity grid and is also involved in expanding Athen's old Ellinikon airport.

At the same time, Greece still has a duty towards Brussels, where Beijing is accused of trying to sabotage a unified EU with initiatives such as the "17+1" summit. Brussels has announced that it will clamp down more on Chinese investment in Europe. This is even more likely to happen if German Defense Minister Ursula van der Leyen becomes president of the European Commission. She has already described China's rise as a security challenge and has a critical view of the New Silk Road project. "We need to define our interests against China as Europeans and prevail," she has said, arguing that China is expanding its power by making countries all over the world dependent on it, particularly by lending money.

This will not make Sino-Greek relations easier. It's likely that the Greek veto in the summer of 2017 against issuing a joint EU declaration on the state of human rights in China was indirectly due to Beijing's influence. However, many of Greece's deals with the Chinese were made possible in the first place because of Brussels' pressure on Athens during the financial crisis that began 2008. The EU and the International Monetary Fund forced privatization on Greece. But grotesquely, the EU did not invest in the port of Piraeus, nor in rail lines. Port operators in Hamburg, Bremerhaven and Rotterdam are not interested in the fact that goods are being unloaded in Piraeus and no longer have to travel around the Iberian Peninsula. When Beijing got involved, Brussels was quick to criticize. This was not its idea of privatization.

Mitsotakis is considered a business-friendly centrist. Finding a compromise that takes into account Greece's interests, as well as those of China and the EU, will probably be one of his greatest challenges