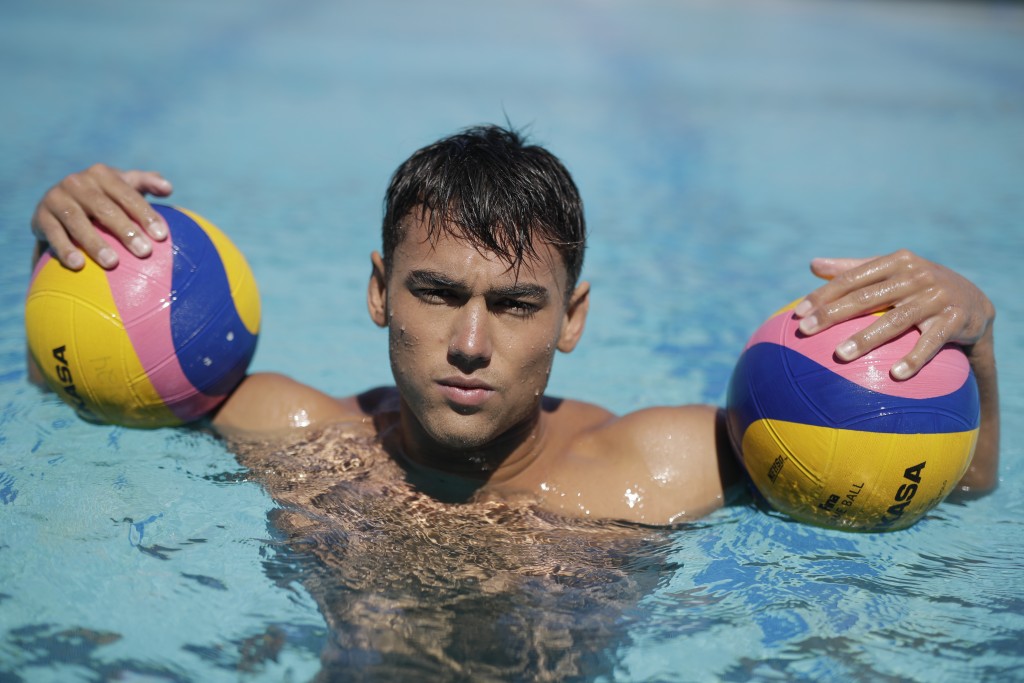 Long before Johnny Hooper starred at California and starting playing water polo against the world, his biggest competition was his father, Gary.

They played a couple different sports, and Johnny lost all the time at first. Gary Hooper was an elite athlete himself, a Hall of Famer in beach volleyball.

While Johnny Hooper was competing against his dad, a spark turned into a flame, and a flame grew into a fire that burns to this very day — in the middle of whatever pool Hooper finds himself at the moment.

"I guess it is a deep-rooted issue as well," Hooper said in a phone interview. "I definitely always, always, whether it be in or out of the pool, I want to be the best in every single aspect or every single category that you can be in so that there's no doubt in anyone's mind that you're doing your job."

Three years after he failed to make the 2016 Olympic team, Hooper is a key attacker for the United States heading into a big summer. The U.S. plays Kazakhstan on Monday in Gwangju, South Korea, in its first game at the world championships — a major touchpoint on the road to the 2020 Tokyo Games.

After winning a silver medal in 2008 in Beijing, the U.S. finished eighth at the 2012 London Olympics and dropped to 10th in Rio de Janeiro in 2016. This year's worlds could serve as a barometer for the U.S. team under coach Dejan Udovicic as the Americans try to gain ground on the vaunted Baltic programs and secure their ticket to Tokyo.

Playing in the Olympics would be a dream come true for the 22-year-old Hooper and his family. This one, in particular.

Hooper has dual citizenship with the U.S. and Japan. His mother, Mimi, was born in Kumakura, and his grandmother, Tomiko Nagatani, lives near Yokohama.

"My grandma is definitely patiently waiting," Johnny Hooper said with a chuckle. "She wants to see me in the Olympics very, very, very badly."

Hooper's mother knew very little about water polo when a firefighter friend of Gary's recommended the sport for Johnny, who took to swimming at a very young age.

Looking for a place for Johnny to play, Mimi, 55, called Pepperdine University and got connected to then-coach Jack Kocur.

Kocur directed Mimi to Los Angeles Water Polo Club, and it was love at first sight. Brian Flacks, who coached Hooper from his first team all the way through his prep career at Harvard-Westlake in Los Angeles, said it was obvious right away.

"You just don't come across athletes at that young of an age that move that well in the water," Flacks said. "This kid's been that good for that long."

Hooper was a four-time All-American at Harvard-Westlake, going undefeated during his senior year. He helped power the University of California to the 2016 NCAA title and finished his collegiate career with a whopping 245 goals, ranking second on the school's all-time list behind three-time Olympian Chris Humbert.

Listed at 6-foot-1, 195 pounds, Hooper is on the smallish side for an elite water polo player. But he makes up for his lack of size with superior athleticism. He rises so high out of the water at times that it looks as if he is climbing some stairs.

"He's a human fish," said U.S. center Ben Hallock, who also played with Hooper in high school. "There's a couple pictures of him out there where literally you can see his thighs are out of the water when he gets up. ... He's a next-level athlete."

Hallock said Hooper "always wants to win more than anybody else in the pool." One of Flacks' favorite stories centers around a counter-attack drill in high school when Hooper threw a shot off the head of a freshman goaltender, and then insisted on taking some 50 more shots until he was satisfied he had it down.

While that type of hyper-competitiveness can be destructive in some situations, Hooper served as a captain in high school and college. He said he has learned over time how to use his competitive streak in a positive way.

"It was sort of trial and error in the beginning," he said. "So when you're younger you don't know that getting mad and stuff about not being the best you can be or getting mad at other people can be detrimental to a program as well, and the team."

Hooper also likes to surf, but his calendar is pretty full these days. After worlds, the U.S. will try to defend its Pan-American title in August in Peru.

It's all part of the buildup to Tokyo, and very likely one happy family moment for Hooper and company.

"It kind of hits home with me, going back to Tokyo," he said. "I think it'll be a really, really, really good testament to I guess the Olympics in general. But super proud and super honored and blessed to hopefully be at Tokyo representing the U.S."