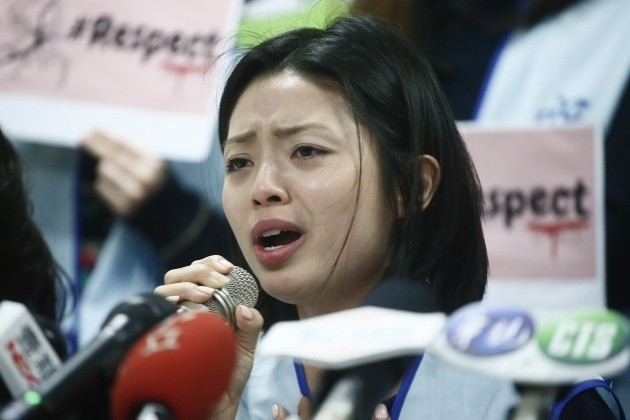 TAIPEI (Taiwan News) -- Kuo Chi-yen (郭芷嫣), flight attendant and director of Taoyuan Flight Attendants Union (TFAU), was reportedly dismissed today (July 11) by EVA Air for making a joke about "adding something" to the captain's meal during the flight attendant strike.

Kuo on Tuesday (July 9) took to Facebook to concede that her statements about "pummeling" (電爆) anti-strike flight attendants and "adding something" (加料) to the captain's entree were inappropriate, emphasizing that they were meant as jokes. EVA Air failed to find the humor in the jokes and reported the case to the police on suspicion of violating the Civil Aviation Act (民用航空法), reported CNA.

EVA Air held a meeting this morning to discuss Kuo's case. Some of those who attended the meeting later told CNA that the decision was made to relieve Kuo of her duties.

In her Facebook post, Kuo admitted to making the statements, but said that the original context was a discussion about an employee's excessive criticism of the union. She pointed out that the employee's bullying remarks were also inappropriate and she encouraged staff to report the incident to the "anti-bullying" mailbox.

However, in the course of the discussion, she said she became too emotional. When someone asked who the employee was, she blurted that it was "the person who should have something added to their entree."

Kuo said that she did not intend to harm the employee. She said it was meant as a joke, but conceded it had some inappropriate features.

As for her comment about wanting to "pummel" strikebreaking flight attendants, she explained that she had no intention of bullying anyone. She said she would accept the company's investigation calmly, put forward explanations, and advocate relevant rights and interests in accordance with the law.

Before today's meeting, EVA Air had suspended Kuo from her flight duties and temporarily reassigned her to the ground crew. EVA Air said that it would make the decision public after the finalizing the content of the meeting's findings, and Kuo has yet to make an official statement on her status at the air carrier.