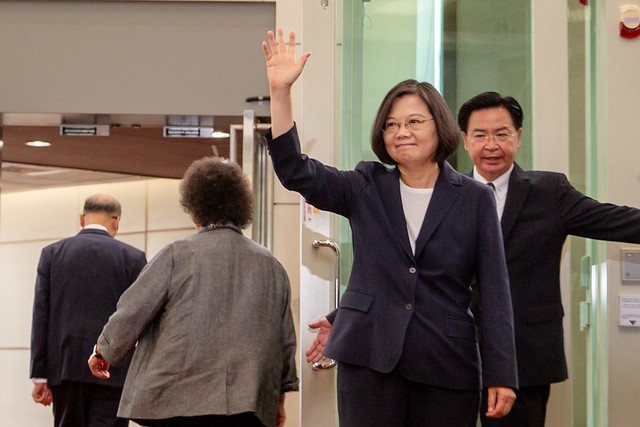 TAIPEI (Taiwan News) — Speaking ahead of her departure for New York, President Tsai Ing-wen (蔡英文) pledged to seek cooperation with other countries in safeguarding Taiwan’s democracy while creating more space for the island in the international community.

“Taiwan will firmly protect its democratic system,” declared Tsai in a brief remark at the airport. Facing threats and acts of subversion from a foreign power, Taiwan will seek collaboration with like-minded countries to ensure its hard-earned democracy, she added.

Accompanied by Secretary-General of the National Security Council David Lee (李大維), Foreign Minister Joseph Wu (吳釗燮), and other top government officials, Tsai embarked on the foreign trip, her seventh since taking office in 2016, at noon on Thursday (July 11).

Tsai will visit Caribbean allies, including Haiti, Saint Lucia, Saint Vincent and the Grenadines, and Saint Kitts and Nevis, from July 11-22 via the U.S. The delegation will transit in New York and Denver for four nights during the trip despite China’s protest. Beijing opposes Taiwan presidents touching down in the U.S., even though it has become a customary arrangement for heads of the island country during their trips to Latin American and Pacific nations.

The aim of the trip is to seek more space and economic opportunities for Taiwan, said Tsai. Referring to Taiwan as an oceanic nation sharing freedom and openness with the entire world, Tsai suggested the country should not confine itself to the Taiwan Strait, tackling only its relationship with China.

Taiwan will continue to push forward international cooperation with allied nations in the pursuit of sustainable development, said Tsai. The nation will make good use of its advantages in technology to make greater contributions to allies and the world, she added.