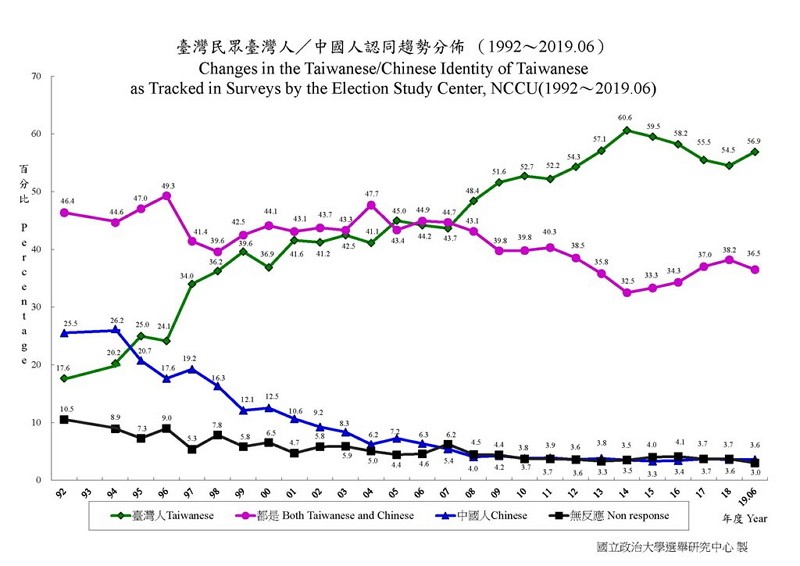 TAIPEI (Taiwan News) – Nearly 57 percent of people in Taiwan identify as Taiwanese, the most in five years, according to a survey conducted by National Chengchi University's Election Study Center.

The number of people who self-identify as Taiwanese peaked in 2014, at 60.6 percent, then dropped for four consecutive years, hitting 54.5 percent in 2018. The poll's answer choices included "Taiwanese," "both Taiwanese and Chinese," "Chinese," and "No response," the Central News Agency reports.

The uptick in those who regard themselves as Taiwanese rather than Chinese could be attributed to a rise in anti-Beijing sentiment over the controversy sparked by the extradition bill in Hong Kong and earlier statements by Chinese leader Xi Jinping, who warned Taiwan about the inevitability of unification, according to Tsai Chia-hung (蔡佳泓), director of the Election Study Center.

The annual survey targeted individuals aged 20 and older living on Taiwan's main island. A total of 7,380 people were interviewed.

The results of the poll suggest an upward trend toward identification as Taiwanese. In 1992, only 17.6 percent of respondents considered themselves to be Taiwanese, while those who believed they were Chinese or both Taiwanese and Chinese accounted for 25.5 percent and 46.4 percent, respectively.