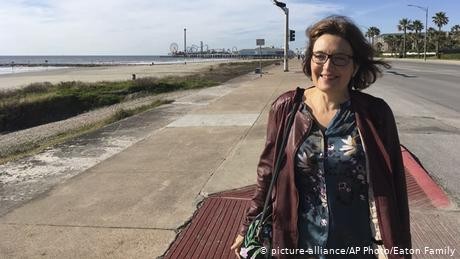 Authorities on the Greek island of Crete said on Wednesday that they now suspect foul play led to the death of US scientist Suzanne Eaton, one day after a body believed to be that of the missing researcher was found in a disused military bunker.

Coroner Antonis Papadomanolakis told the Associated Press that "The only thing we can say is that the [death] resulted from a criminal act."

"We can't give out any other details because there is an ongoing police investigation."

Eaton, 59, was a molecular biologist at the Max Planck Institute in Dresden, Germany. She had been in Crete to attend a scientific conference. Colleagues believe she had gone out for a run during the event last week and never returned .

This theory was backed up by the fact that her wallet, passport, phone, and money were all found in her hotel room, but her running shoes were missing.

She was found by cavers in a system of man-made tunnels and caves that had been used by occupying Nazi forces during World War II. The bunker is about 7 miles (11 km) from her hotel. Authorities said that the caves are relatively easily accessible from a commonly used road.

A police source told the Reuters news agency that she had died of asphyxiation after possibly being struck by several blows.

Her biography on the Max Planck Institute website described Eaton as "a leading scientist in her field, a strong athlete, runner and senior black belt in Taekwondo."

"It is with enormous sadness and regret that we announce the tragic demise of our dearest friend and colleague, Suzanne Eaton," the Max Planck Institute said in a statement.

"We are deeply shocked and disturbed by this tragic event. Suzanne was an outstanding and inspiring scientist, a loving spouse and mother, an athlete as well as a truly wonderful person beloved to us all. Her loss is unbearable."