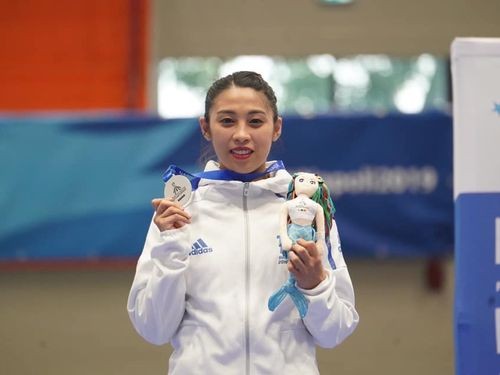 Taipei, July 8 (CNA) Taiwanese athletes were not expected to replicate their huge medal haul at the 2017 Universiade in Taipei, but they have so far done reasonably well at this year's Universiade in Italy and are currently ranked seventh in the medals table.

As of the end of the day Sunday, Taiwan has won four golds, five silver and three bronzes since the 2019 Summer Universiade in Naples opened on July 3.

Taiwanese taekwondo athlete Su Chia-en (蘇佳恩) grabbed a silver medal in the taekwondo women's individual poomsae Sunday -- Taiwan's first medal in the sport this year -- with a total score of 6.99.

The college senior told CNA by phone that she was nervous performing her routine as it has been a long time since her last individual competition, and declared that Sunday's competition was her last as a college student.

"But I don't have any plans to retire from taekwondo competition," she said.

Taiwan's men had managed no better than bronze in the event at the Universiade since then.

Meanwhile, Taiwanese gymnast Tang Chia-hung (唐嘉鴻) fought off a foot injury to grab gold Sunday in the men's horizontal bar event with a score of 14.700. He edged out Milad Karimi of Kazakhstan, who scored a 14.675, for the top spot.

It was Taiwan's second gold medal in gymnastics this year after Lee Chih-kai (李智凱) won gold earlier Sunday in the men's pommel horse, easily defending the title he won in Taipei in 2017.

Also on Saturday, Wang Hsing-hao (王星皓) took Taiwan's first medal in swimming at this year's Universiade after Taiwanese swimmers failed to grab a single medal in the sport in 2017 on home ground.

Wang took bronze in the men's 200-meter individual medley final with a time of 1:59.87, about one second behind winner Juran Mizohata of Japan but about half a second ahead of fourth place finisher Tomoya Takeuchi.

Later that same day, Liu partnered with Yang in the mixed doubles and won a silver medal.

Taiwanese athletes won 26 gold medals and 90 total medals at the 2017 Universiade in Taipei to finish third in the medal table behind Japan and South Korea.

They benefited not only from competing at home but also from such optional sports as roller sports, badminton and Wushu, in which it won 16 golds and 37 total medals. In roller sports along, Taiwan won 10 gold and 23 total medals.

The Universiade is an international multi-sport event, organized for university athletes by the International University Sports Federation (FISU), and is held every two years.