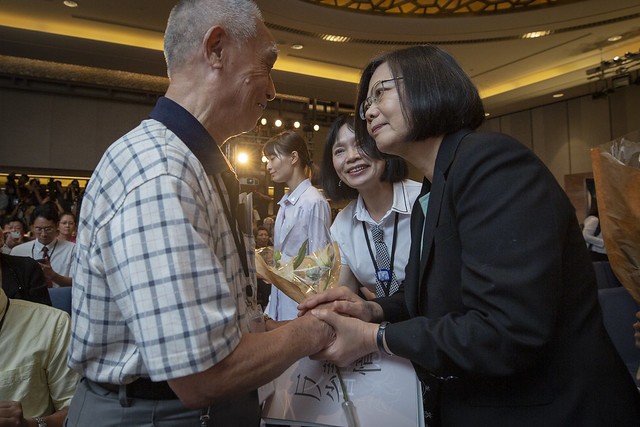 “The work of transitional justice in Taiwan has come late, but from now on, it will never be absent,” said Tsai, before handing a white lily to Secretary-General to the President Chen Chu (陳菊) and giving her a warm embrace.

A pro-democracy activist who was jailed for her involvement in the Formosa Incident (Dec. 10, 1979) four decades ago, Chen was among the victims who had their names cleared on Sunday. Many who attended the ceremony, however, were there on behalf of those who had passed away before seeing their reputation restored.

“You did not commit a crime. You are brave and we have to thank you all,” said Tsai, paying her respect to the pro-democracy activists whose protests and activities were deemed unlawful and hence prosecuted by the authoritarian government.

This is the third such ceremony the Transitional Justice Commission (TJC) has held since October 2018. Tsai acknowledged that work to promote transitional justice in Taiwan has not been done quickly enough. Nevertheless, she commended the commission for having revoked criminal charges and cleared the records of 5,837 people who were politically prosecuted during the White Terror period.

In addition to engaging in pro-democracy activities and openly challenging the authoritarian government, people were prosecuted and even executed for reading politically sensitive books, or being reported for “suspicious acts.” The suppression of political dissidents started in the aftermath of the 228 Incident (Feb. 28, 1947) and persisted until the lifting of martial law in 1987.

Rescinding the convictions of those whose human rights were abused by the state apparatus, regardless of their ethnicity or political orientation, is the government’s primary task for realizing transitional justice, said Tsai.

The president pledged to follow through on new legislation and direct the nation’s security agencies to provide further documents relating to political cases during the White Terror era, so they can be investigated when necessary.

A bill intended to declassify political documents kept by government agencies or a political party was passed by the legislature last week. This could bring to light political cases that have not been entirely resolved, including the Formosa Incident and the murder of Chen Wen-chen (陳文成), a professor at National Taiwan University who was killed in July 1981 near the school library under mysterious circumstances.

Only when truth is restored and lessons from past mistakes are learnt will Taiwan society heal the wounds of past history and transform into a more mature democracy, added Tsai.