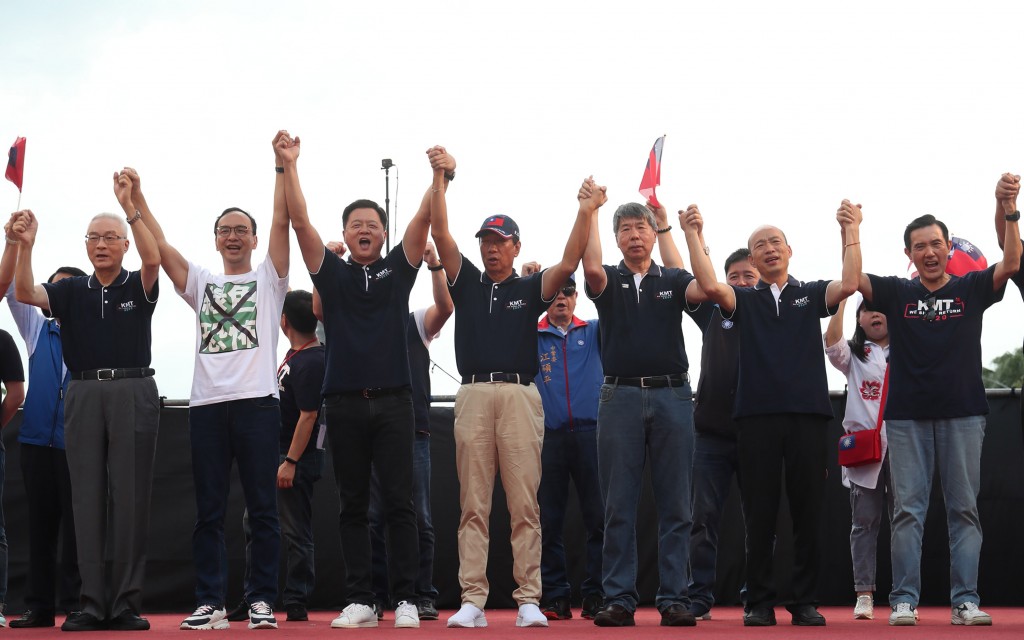 All five contenders for the opposition Kuomintang (KMT) nomination in the 2020 presidential election joinedthousands in a rally in Taipei Sunday against what they called asignificant erosion of voters' rights in recent amendments to theReferendum Act.

The KMT-organized rally was held a day before party publicopinion polls to pick its presidential candidate scheduled to kickoff nationwide July 8-14, with the results to be released July 15.

In his address, Chu said democracy is the most precious thingfor Taiwan.

Listening to different voices and respecting each other's views isthe core of democracy, according to Chu. However, he said, the rulingDemocratic Progressive Party (DPP) has decided to set restrictions onthe people's right to cast referendum ballots.

"We need to use our ballots to force the DPP administration outand let the KMT regain power," Chu said.

Chu, meanwhile, called on KMT supporters to unify in the faceof a poorly performing DPP administration.

The DPP's push for an "iron cage" referendum law amendment isaimed at restricting the country's democracy and freedom of speech to silence those who hold different views from those of the DPP, the ex-mayor said.

For his part, Gou said the ruling party should change its nameto Democratic "Regressive" Party under President Tsai Ing-wen (蔡英文)for its continuous efforts to erode the nation's democracy.

Han, on the other hand, called on swing voters and DPP supportersto think twice before voting again for Tsai, who is seeking reelection.

"Has your life got any better over the past years (with Tsaiin office)?" he asked.
He pledged that he will keep Taiwan safe while boosting the economy to make everybody rich if elected the country's nextpresident.

Meanwhile, Chang, a pro-China candidate, accused the DPP ofabandoning Chinese culture, saying that he will restore the KMT'sglory and Republic of China tradition, describing himself as "Chinese and also Taiwanese."

Together with all the KMT presidential candidate hopefuls, former President Ma Ying-jeou (馬英九) and KMT Chairman Wu Den-yih (吳敦義)pledged that should the KMT win the 2020 presidential election, itwill make amendments to restore the people's right to vote inreferendums.

The revisions to the Referendum Act were pushed through by the DPP-controlled Legislative Yuan June 17 to restrict the holdingof national referendums to only once every two years, on the fourth Saturday of August, starting in 2021.

The latest decision came after DPP lawmakers in late 2017passed an amendment making it easier to initiate referendums, leading to 10 referendum questions being put to a vote alongwith the November 2018 local elections, in which the DPPsuffered a major defeat.

The DPP decided to pass the latest amendments to prevent arecurrence of the problems of long lines at polling stations, slowvoting, and delayed results that arose last November.

The amendments also drew protests from a number of civic groups,who said the decision would create new obstacles to passingreferendums and undercut direct democracy.

The change is expected to drastically reduce the turnout rate at polling stations, making it extremely difficult for any referendum to pass, according to the civic group representatives.