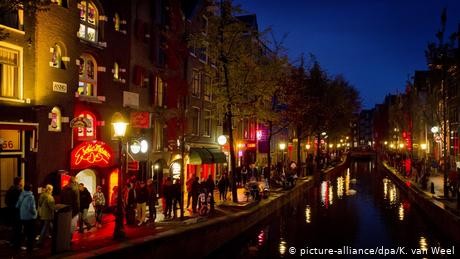 Sex workers initial reactions to plans to reform Amsterdam's Red Light District were somewhat tepid on Thursday, which is perhaps unsurprising considering their resistance to previous attempts to change the rules that govern the Dutch capital's De Wallen neighborhood.

Foxxy Angel, a member of the PROUD sex workers' union, told Dutch media outlets that "with these types of plans, you ensure that sex workers disappear from view," adding that the real problem was tourists who didn't know how to behave, not the escort industry.

Lennard Roubos, a member of the neighborhood council for the area including De Wallen, agreed. He said that he had seen many plans over the years to improve the sometimes dangerous and chaotic part of the city, but that promises from successive mayors had never been backed up by enforcement.

On Wednesday, mayor Femke Halsema, the first woman to hold the post in Amsterdam's 700-year history, revealed four options to reign in what she called the "many-headed monster" in De Wallen caused by drunken tourists, bachelor parties, human trafficking and drug use.

"For many visitors, the sex workers have become no more than an attraction to look at. In some cases, this is accompanied by disruptive behavior and a disrespectful attitude to the sex workers in the windows," Halsema said in a statement.

"At the same time, there has also been a major increase in unlicensed, underground prostitution."

The first of Halsema's four options would be to close the curtains in licensed brothels, which she believes would decrease crowding and gawking.

Sex workers were skeptical. The chair of the organization Red Light United told Dutch outlet Nieuwsuur: "How are you going to attract customers if the curtain is closed?"

Another option would be to remove brothels from De Wallen altogether and move them to a less central part of the city. But this has also been criticized by advocates for the safety risks it poses to sex workers if they do not have immediate access to emergency services.

The other two proposals include relocating some of the brothels to other districts of Amsterdam, or even increasing the number of windows to reduce pressure on individual sex workers.

Halsema has made it clear that she does not want to criminalize sex work. Most experts agree that making sex work illegal increases the likelihood of trafficking and assault.

"We legalized prostitution because we thought and still think that legal prostitution gives a woman a chance to be autonomous, independent," she said.

"Criminalizing prostitution has been done in the United States, which I think makes women extra vulnerable."

Amsterdam's city council has already approved a measure to stop group tours from entering De Wallen, as these can often make the narrow streets in the neighborhood impassable. They also decreased the overall number of people allowed on tours fro 20 to 15, as the whole city grapples with the issues brought on by overtourism — especially tourism driven by legal prostitution and the sale of cannabis.

The new regulations also ban free tours, which have increased in popularity in recent years. The idea behind these tours is that there is no up front fee, but participants are encouraged to leave a small donation to the tour guide afterward.

Mayor Halsema is set to meet with sex workers, business representatives and concerned citizens in a series of town hall meetings throughout July to discuss her plans. The most popular proposals will then be brought to the city council for a vote.