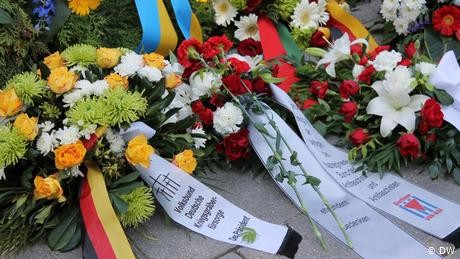 In central Berlin, there is no shortage of memorials commemorating the victims of the Nazi dictatorship and the war unleashed by the Third Reich. In addition to the Memorial to the Murdered Jews of Europe, monuments to the Sinti and Roma and to persecuted homosexuals, as well as a Soviet memorial, are all located near the Reichstag building.

Polish politicians, however, have repeatedly said that Poland was the first victim of the German invasion on September 1, 1939; that the nation paid an enormous blood toll for its resistance but still lacks an adequate place to lay a wreath of flowers to honor the six million Poles who died during World War II.

A year and a half ago, an initiative launched by German citizens restarted discussions for a memorial. On November 15, 2017, Florian Mausbach, former president of the Federal Office for Building and Regional Planning, appealed to German lawmakers and the public to build a memorial in the center of Berlin to commemorate the Polish victims of the German occupation. He suggested it be located at Askan Square, near the ruins of Anhalter Bahnhof railway station.

"A worthy Polish monument on Askan Square would send a German-Polish message that puts war, extermination, flight, expulsion and reconciliation into the inseparable context of cause and effect," the appeal read.

Well-known politicians, scientists, and individuals from the cultural scene and the churches, including former Bundestag President Rita Süssmuth and her successor Wolfgang Thierse, backed Mausbach's call.

Start of a debate

The appeal sparked a lively discussion in Germany. With a memorial to Polish victims of World War II, Germany would recognize that "German aggression and extermination policy began in Poland on September 1, 1939, and not just with the invasion of the Soviet Union in 1941," according to Dieter Bingen, director of the Darmstadt-based German Poland Institute.

Critics point to the danger of a "nationalization" of remembrance. Commemorating Nazi victims by separate nations is problematic, argued Markus Meckel, a German Social Democrat who has been involved in the German-Polish dialogue for decades. Memorials would have to be built for the millions of victims from other nations as well, such as Ukrainians and Belarusians, among others, he said.

Instead, Meckel suggested setting up a documentation center about the war of annihilation in the east that would present the history of Eastern Europe since the signing of the August 23, 1939, Molotov-Ribbentrop Pact.

A monument "only for ethnic Poles" would send the wrong message, said Stephan Lehnstaedt, a Holocaust researcher from Touro College Berlin. He suggested building a German-Polish museum either in Berlin and Warsaw.

The German initiative for a memorial was welcomed in Poland.

"Germans want a monument to Poland," wrote the left-liberal Gazeta Wyborcza. The national-conservative government, led by the Law and Justice (PiS) party, also viewed the project favorably. Foreign Minister Jacek Czaputowicz has made several statements to that effect, while an idea backed by left-wing circles to erect a memorial to all of Nazi Germany's Eastern European victims was met with rejection in Warsaw.

"No big sack for all Slavs," Polish historian Pawel Ukielski wrote in Germany's daily Frankfurter Allgemeine Zeitung, recalling the invasion of Poland by the Soviet Army — Hitler's ally at the time — on September 17, 1939.

Read more: When the Polish were refugees in Africa

The German government backs the idea of a memorial to Polish WWII victims. The Foreign Ministry told DW in a statement that the coalition agreement mentions recognition of "victim groups of National Socialism that had previously received less attention."

"In this sense, the federal government has long supported a civil society initiative to erect a Polish monument in the center of Berlin to commemorate the Polish victims of the 1939-1945 German occupation," the statement added.

The final decision, however, rests with German lawmakers. The first discussion in parliament at the beginning of the year did not end with a concrete result. In Poland, meanwhile, politicians are showing signs of impatience.

To restart the discussions, lawmakers from five parliamentary groups published an appeal in the Tagesspiegel newspaper in early May.

"It is our task to keep alive the memory and remembrance of the German war of annihilation against Poland and the National Socialist occupation and to give commemoration a space," wrote Alexander Müller, Dietmar Nietan, Thomas Nord, Manuel Sarrazin and Paul Ziemiak.

Rather than weigh in on how the site should look, they designated it as a space for commemoration, a "suitable place dedicated to the victims of war and occupation in Poland" designed to serve as "memory, enlightenment, understanding and the reduction of prejudice."

Read more: World War I: Europe and the politics of remembrance

Sarrazin, who heads the German-Polish parliamentary group, and the other signatories are now trying to win support in parliament for the memorial project. The Polish side would like to see a sign indicating Bundestag support for the idea of a monument to Polish victims by September 1, which marks 80 years since the German invasion of Poland. But time is running out, and the risk remains that an opportunity to improve relations will be missed.