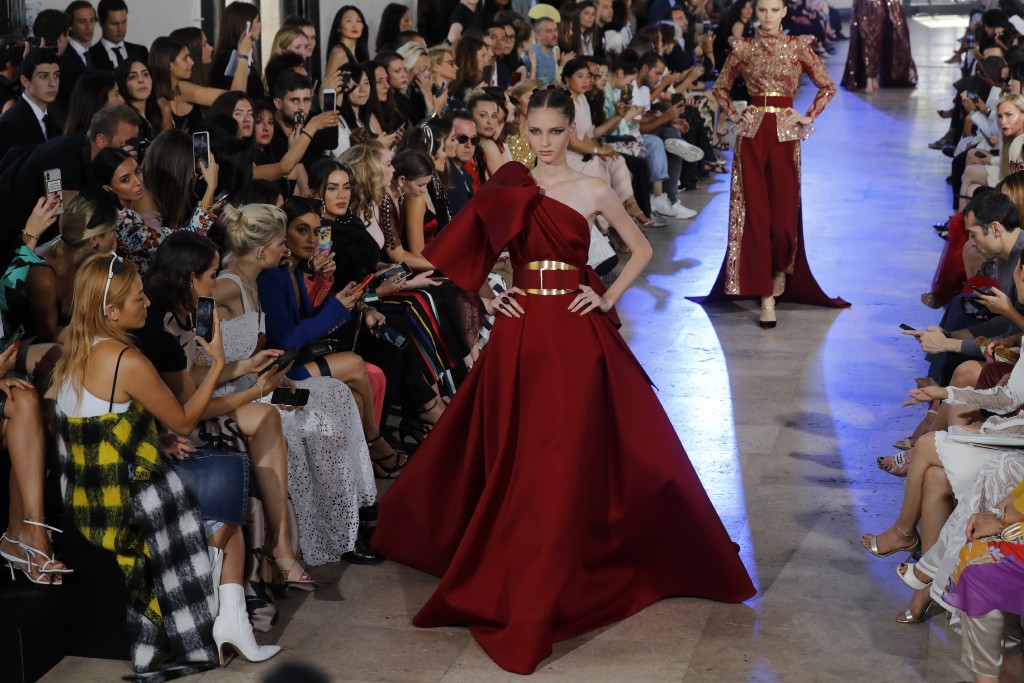 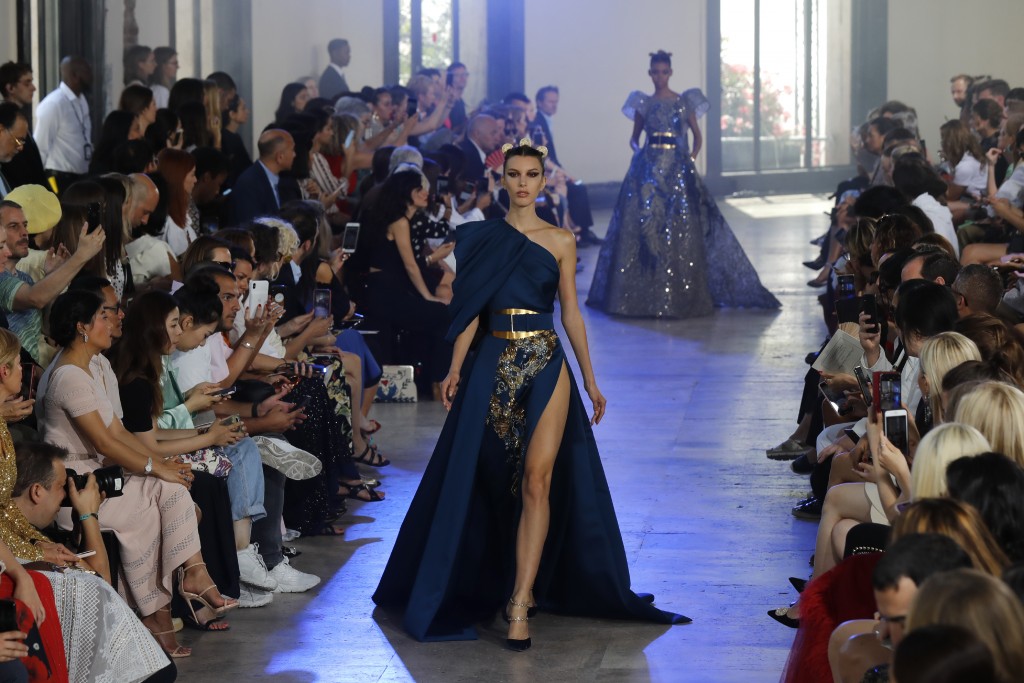 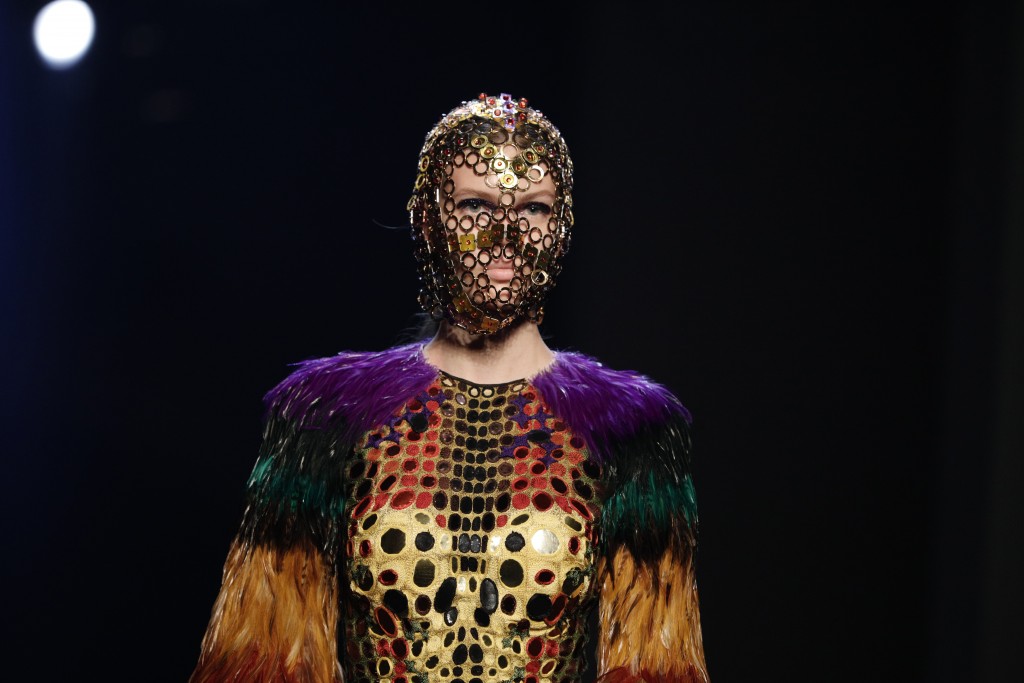 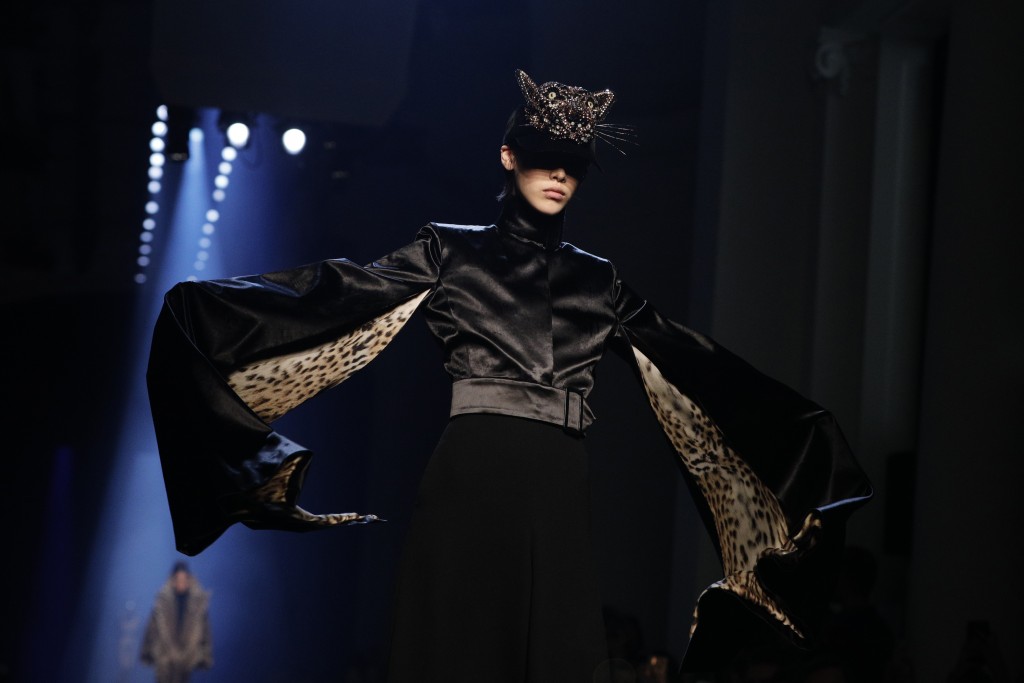 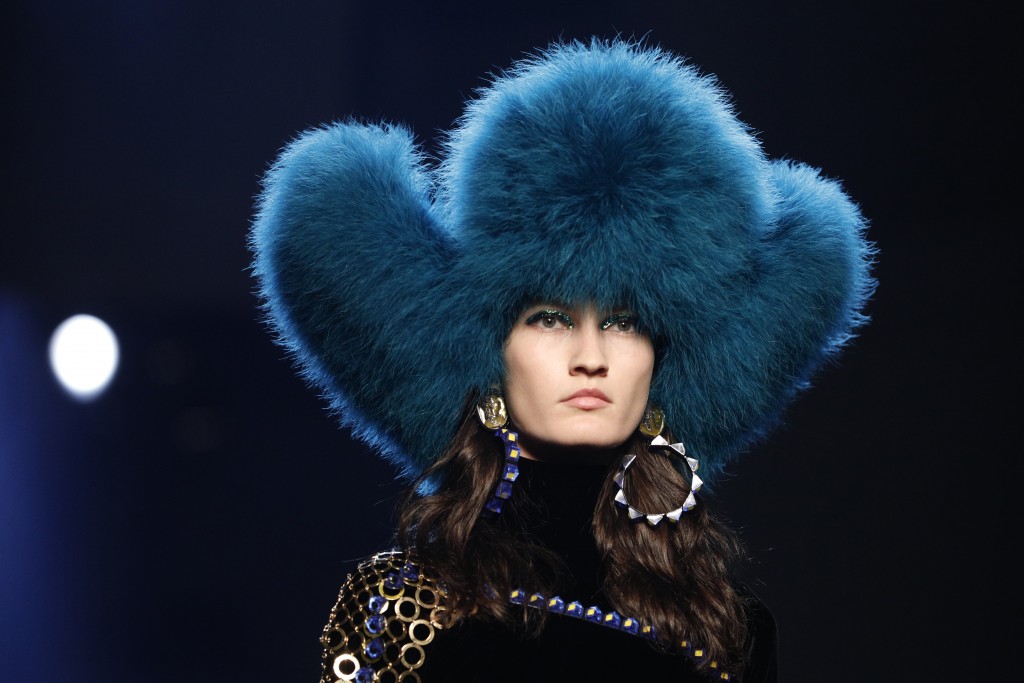 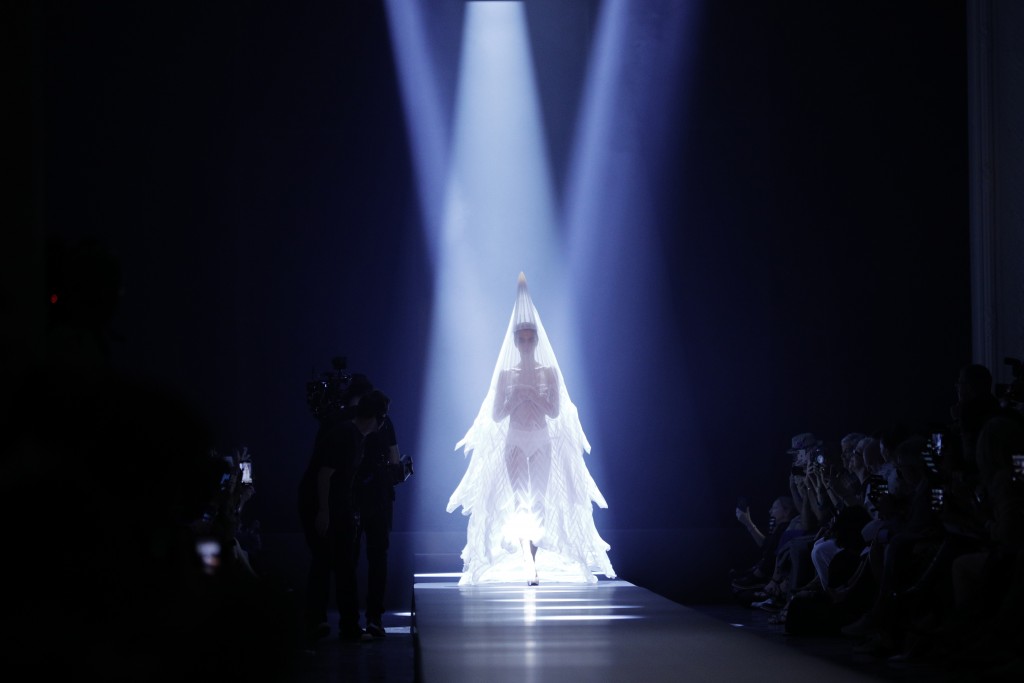 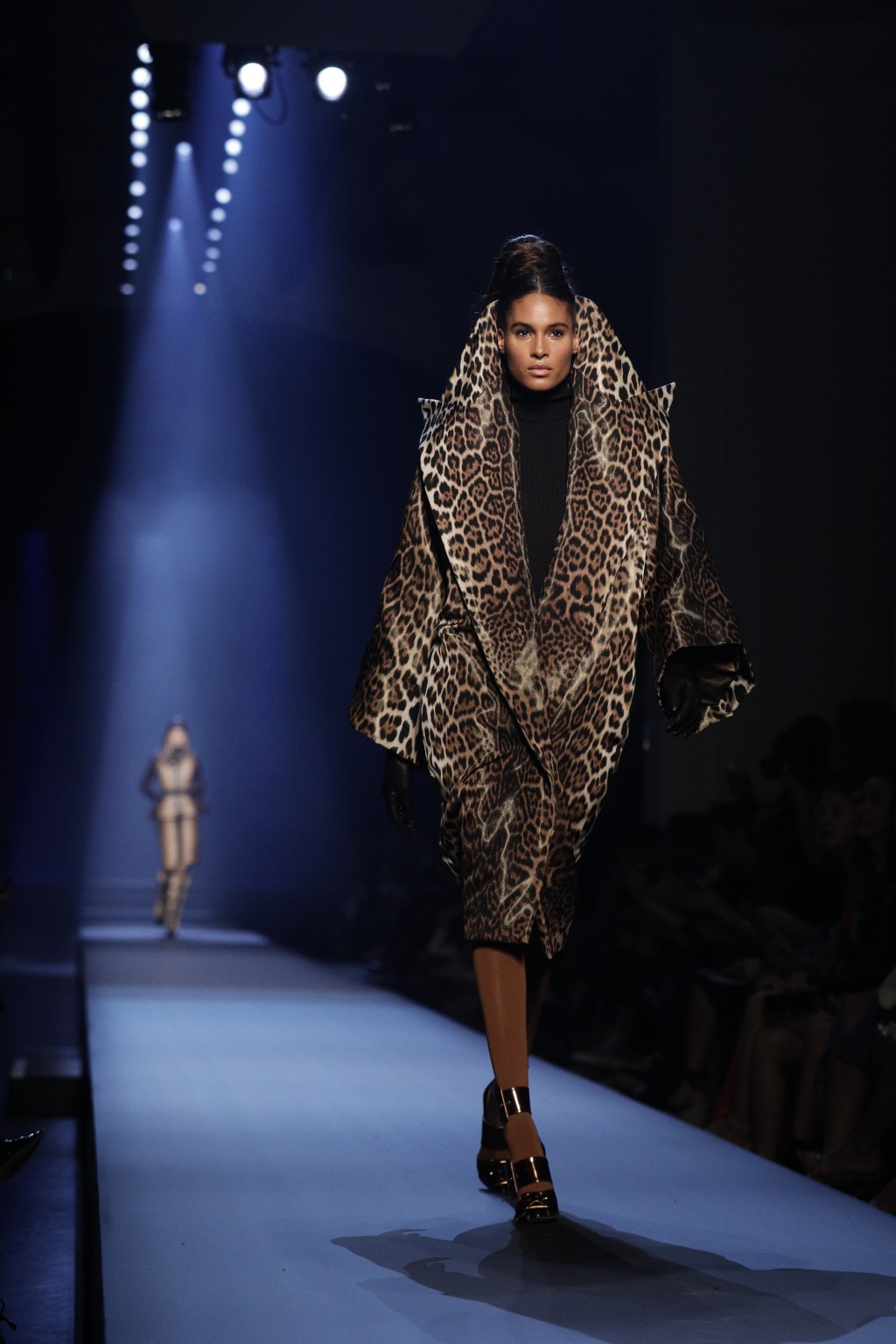 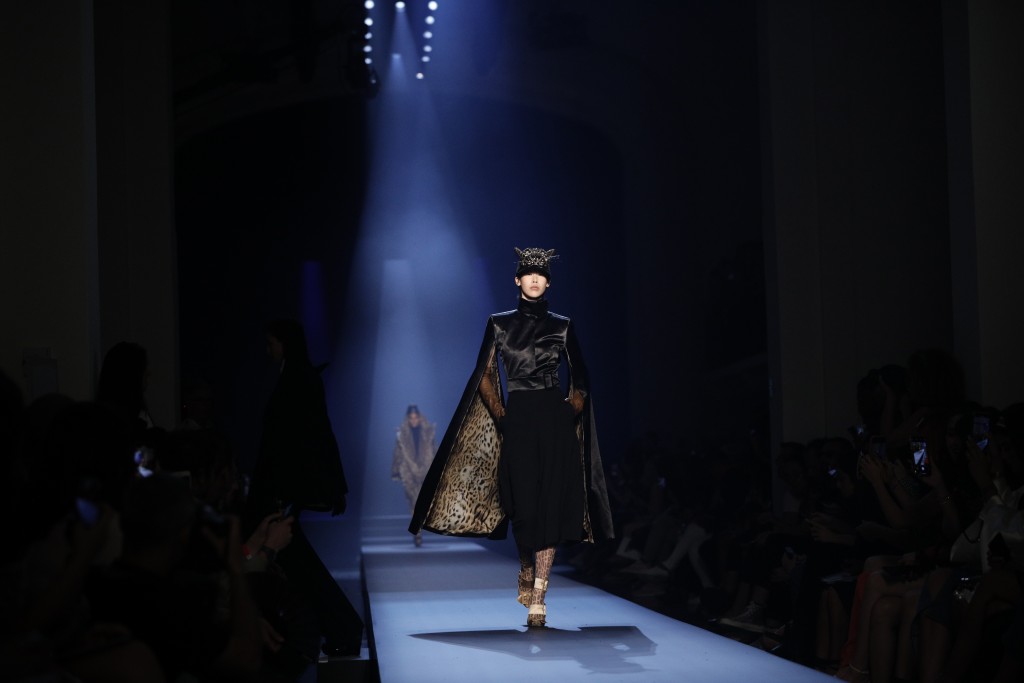 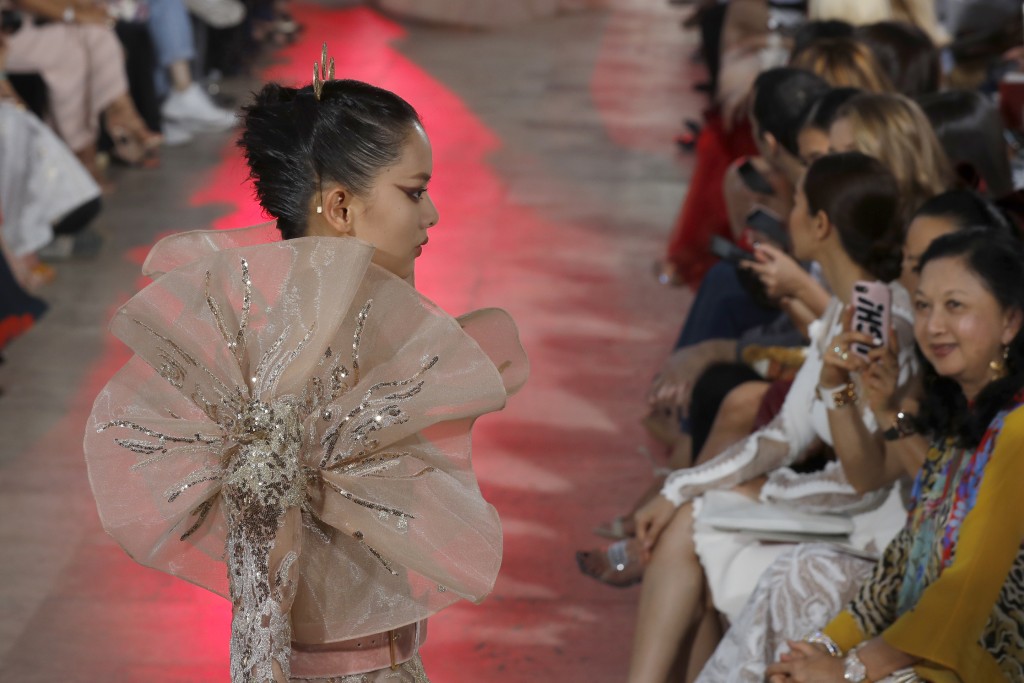 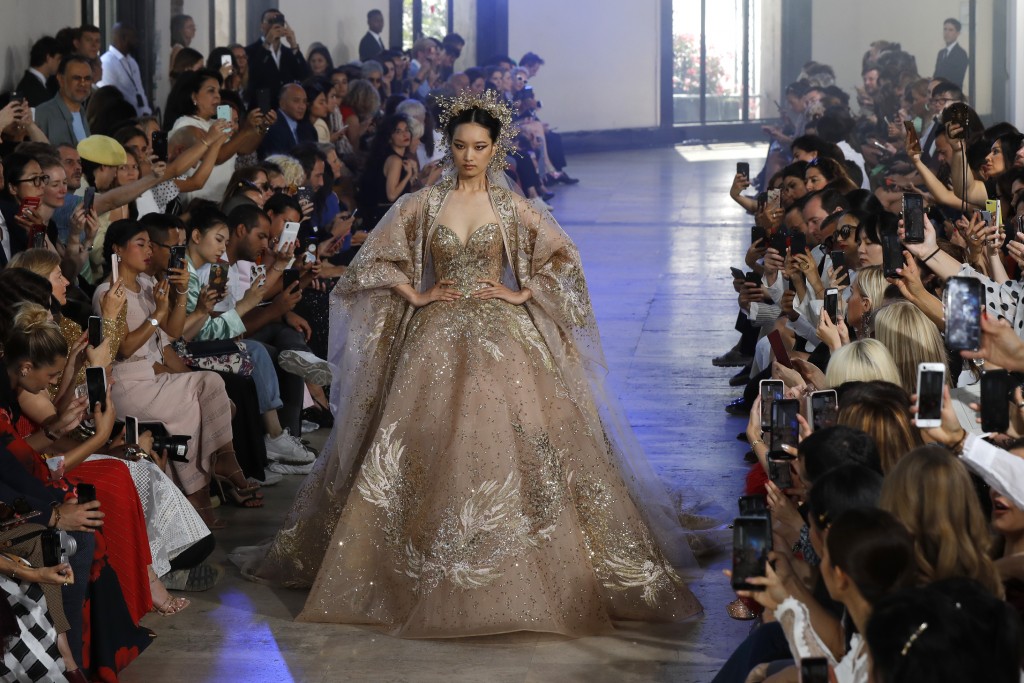 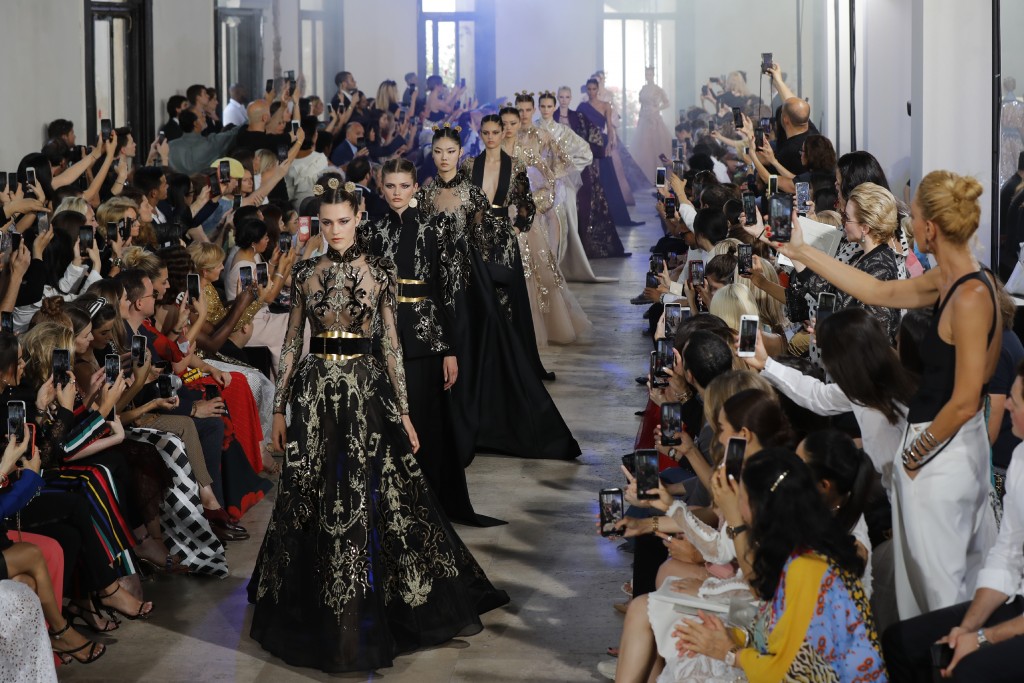 Here are some of Wednesday's highlights:

Last November, animal rights groups hailed Gaultier's announcement that he is joining the growing ranks of designers to ban fur from their collections. Gaultier used this as a muse for a playful fall-winter collection that used feathers to mimic real fur on 1980s-themed looks with a funky retro soundtrack and flashes of bright color.

An oversize Russian winter fur hat, or chapka, looked initially like the genuine article and shimmered alongside a red "fox" bubble jacket. They were, so said the program notes, all constructed in marabou feathers.

Leopard print graced a billowing chiffon gown, geometric zebra stripes jazzed up diaphanous pant look, and all this was followed by a "panther" coat with oversize collar that was made with jacquard.

A blood red silk coat, which was the strongest look in an excessively theatrical display, opened up with its wide collar as if to evoke a carcass cut open, albeit in a very elegant way.

Gaultier's program notes have become legendary over the years. Each season, guests pour over the house cards that humorously detail the couture looks with tongue-in-cheek word plays and rhyming puns.

"Downtown Abyss," ''Black Panther," ''Grey of Thrones" and "Mein Hair" were among some of the quirky couture look titles in this season's lot — all the work of wordsmith Raphael Ciotti.

Ciotti, a 36-year-old screen and stage writer who co-wrote the Gaultier "Fashion Freak Show" musical, says he has been penning the couture notes for several years after first meeting the humor-loving designer during a television show a decade ago.

"He realized we had exactly the same sense of humor and so asked me to write his program notes. He just tells me the show theme and then (I) have free creative rein," Ciotti told The Associated Press. "I try to make as many jokes as possible in each look."

"Nature, through mystical creatures and divine characters, sparked the curiosity of the designer, inspiring him to translate them into his very own art," it added.

There was some sophisticated and thoughtful fashion designs amid the show production — for instance, the famed Chinese traditional dress, the Cheongsam, was reimagined in a light tuxedo-style with a provocatively open bust.

The fashion industry can be a polluting one, as it puts a myriad of people on airplanes across the world for fashion seasons that promote clothes to be discarded as soon as they become passe.

But there are some moments of ecological reflection.

One initiative at Elie Saab had front row editors impressed.

This season, there were no program notes on the seats, ones which often comprise wads of thick, color-printed photos and detailed texts, and often end up in the trash as soon as the critics have finished their reviews.

In their place Wednesday was a giant — and mysterious — barcode on each invitation.

It provoked bemusement from invitees. Each guest was instructed by Saab's staff to hover their phone camera over the barcode, and then an option automatically appeared to load up the notes electronically to a web browser, saving plenty of trees in the process.