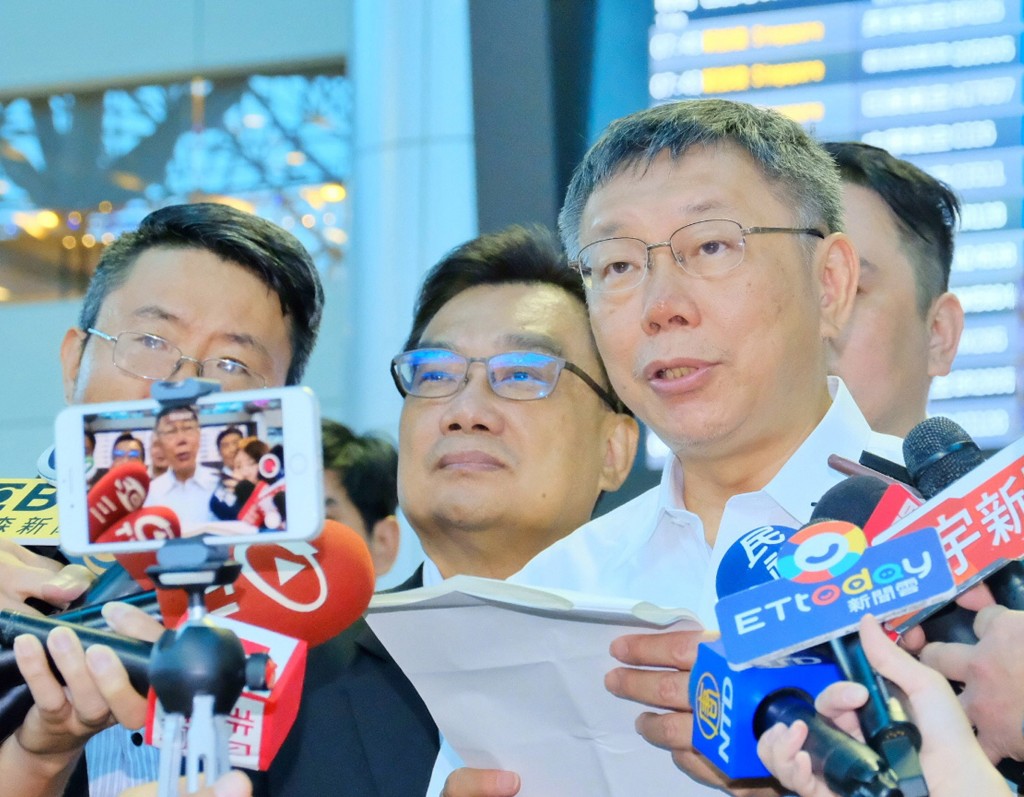 Taipei Mayor Ko Wen-je (柯文哲) on Wednesday criticized a pro-independence newspaper for "concocting fake news" related to his upcoming trip to China and said he was against both "red" and "green" media.

Before boarding a flight Wednesday morning for Shanghai, where he will attend a twin-city forum, the outspoken mayor who many expect to run for the presidency in 2020 denounced the Liberty Times as having gone too far in "concocting fake news."

The Chinese-language Liberty Times, known for its support for the "pan green" camp led by the ruling Democratic Progressive Party (DPP), reported in its Wednesday edition that Ko could possibly "encounter" China's Taiwan Affairs Office Director Liu Jieyi (劉結一) during his stay on Shanghai.

It cited Ko as saying he would approach it with a relaxed attitude and uphold the principle of equality and dignity.

When Ko was asked if such a meeting would "help" or "hurt" him in terms of public opinion, the newspaper quoted him as answering, "the accurate way to say this is that it won't hurt," implying that he thought closer ties with China would be beneficial to his political standing.

Ko said on Wednesday, however, that the quote should have been "the accurate way to say this is that it won't help," an acknowledgment that meeting with a Chinese official would not play well, and he criticized the paper for its mistake.

There is no way of knowing if the mistake was inadvertent or deliberate, and the Liberty Times declined to comment when asked about it. But it corrected the online version of the report without noting that a correction had been made.

The article cast Ko's trip in a negative light, saying he was traveling to China at a time of major protests in Hong Kong against an extradition bill, including a siege of the Legislative Council complex by demonstrators on Monday night.

It said Ko declined to answer a question of whether he will talk with the Chinese side about democracy during his visit in Shanghai, and DPP City Councilor Hsu Chia-pei (許家蓓) said it was regrettable that Ko insisted on "throwing himself at China."

Ko said he is opposed not only to "red media" -- seen in Taiwan as doing China's bidding -- but also DPP-leaning "green media," because both have specific political purposes.

The mayor complained last month that the DPP has been smearing him since September 2017, after the party promoted its own candidate in the mayoral election in Taipei in December 2018, instead of yielding the way for Ko's re-election as it did in the 2014 election.

He accused the DPP of applying smear campaigns against political rivals. "I'm used to it, (the strategy of) either forming an alliance or launching a struggle. It's their (the DPP's) standard way to play (the political game)."

The annual Taipei-Shanghai twin-city forum will be held from Wednesday to Friday. Ko has personally led the Taipei delegations to Shanghai twice in 2015 and 2017.

It was during the 2015 forum that Ko used the phrase "the two sides of the Taiwan Strait are one family" to describe relations with China, a statement that has hurt him with many pan-green supporters, including those who backed him in the 2014 mayoral election.

On Wednesday, Ko said before his departure from Taiwan Taoyuan International Airport that his main focus at this year's forum would be the interests of Taiwan and the people's welfare.

In addition to exchanges on city administration, his trip to Shanghai will also seek to show his concern for Taiwanese living in China, Ko said.

There are currently 2 million Taiwanese living in China, including 700,000 in Shanghai, and there are 380,000 Chinese spouses living in Taiwan, Ko said.

Taiwan also attracted 2.7 million visits by Chinese tourists last year, and with such close interaction, the two sides across the Taiwan Strait should maintain formal communication channels so that they can resolve problems through direct discussions, Ko argued.

Cross-strait dialogue has been frozen by Beijing after the DPP's Tsai Ing-wen (蔡英文) took office as president on May 2016.

She has rebounded in the polls since the beginning of this year by taking a much more vocal hard line against China than she had in the past, an indication that relations with China will likely be an important battleground in the 2020 presidential election, to be held on Jan. 11.