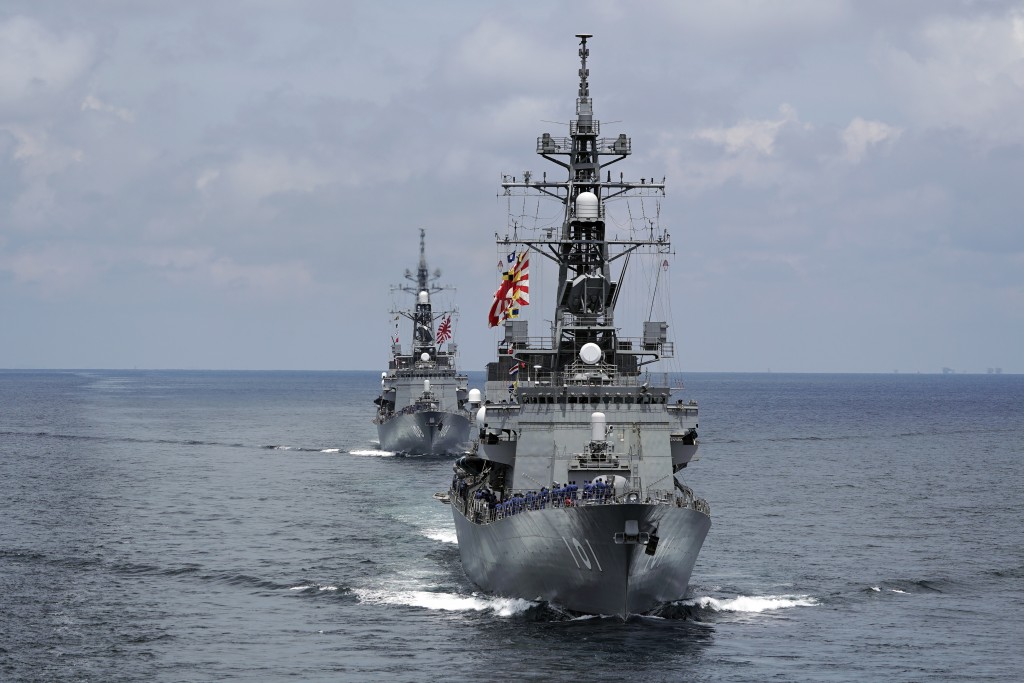 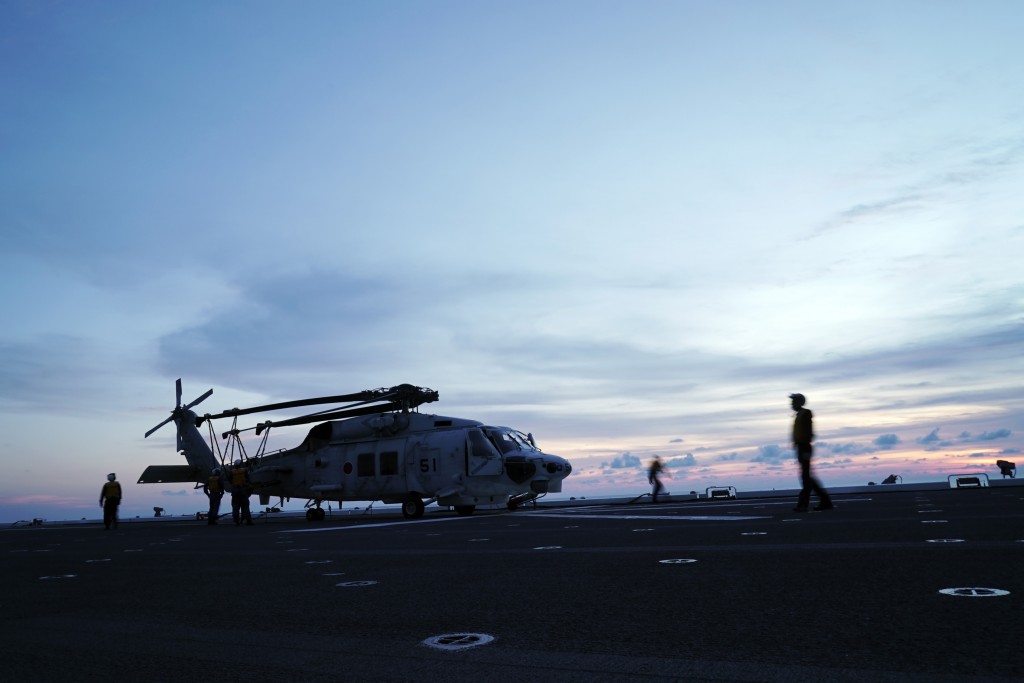 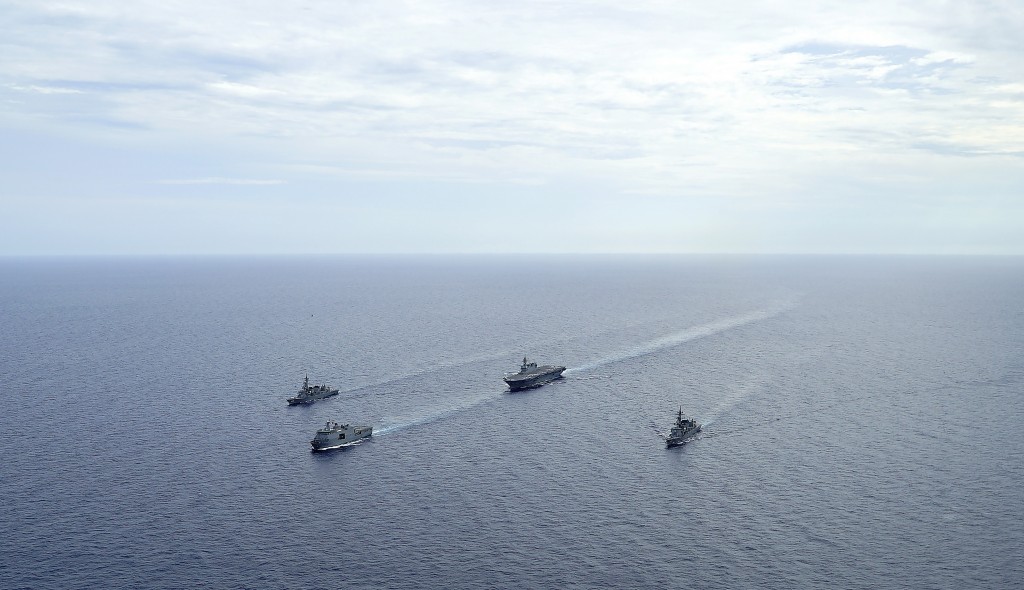 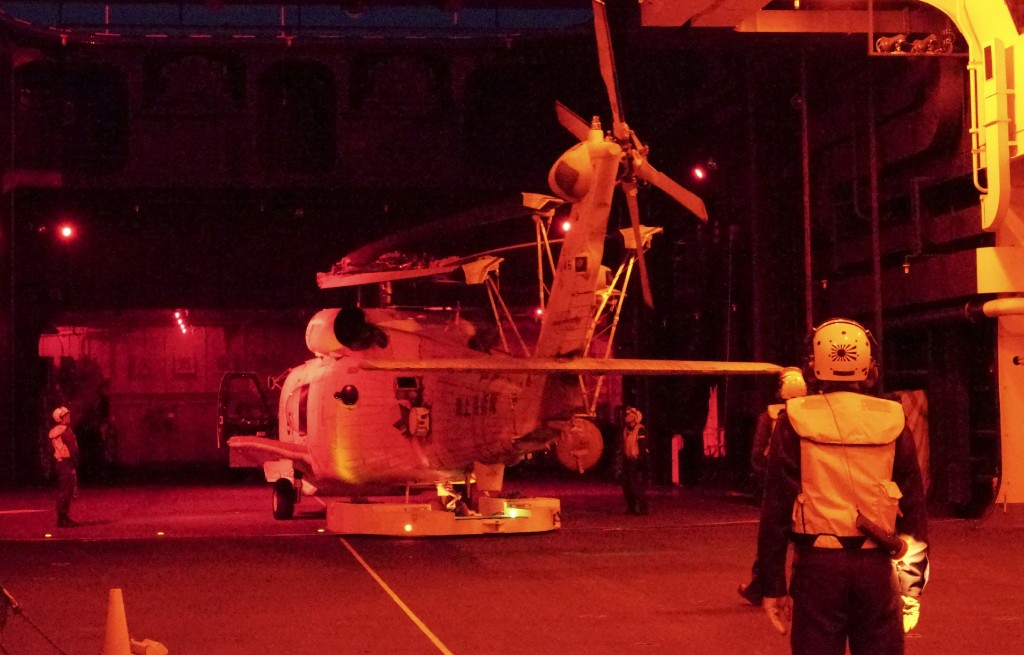 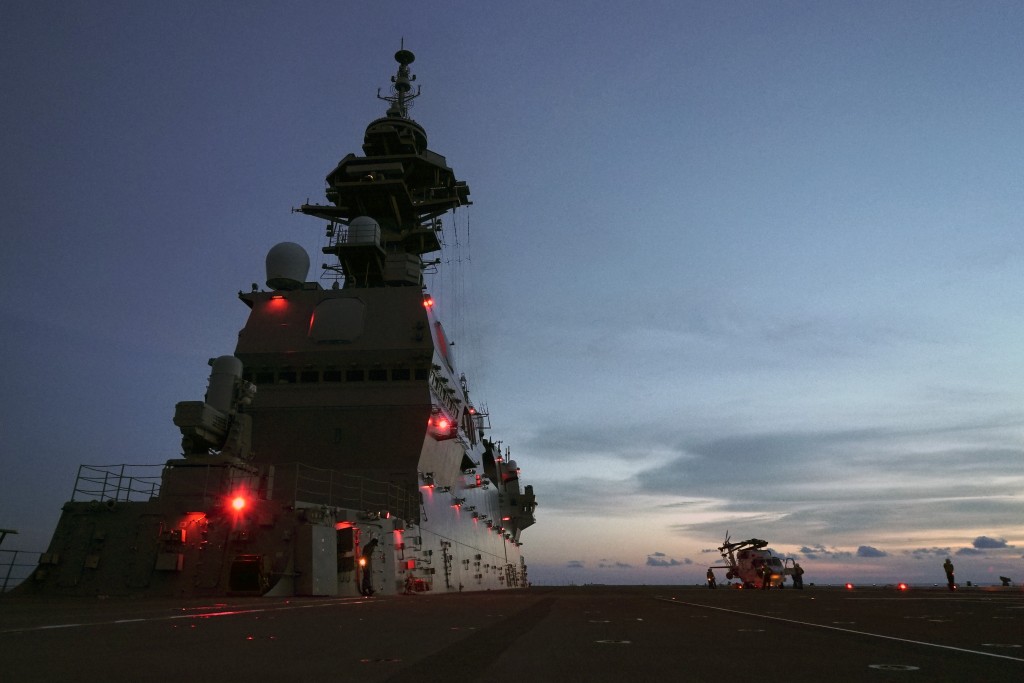 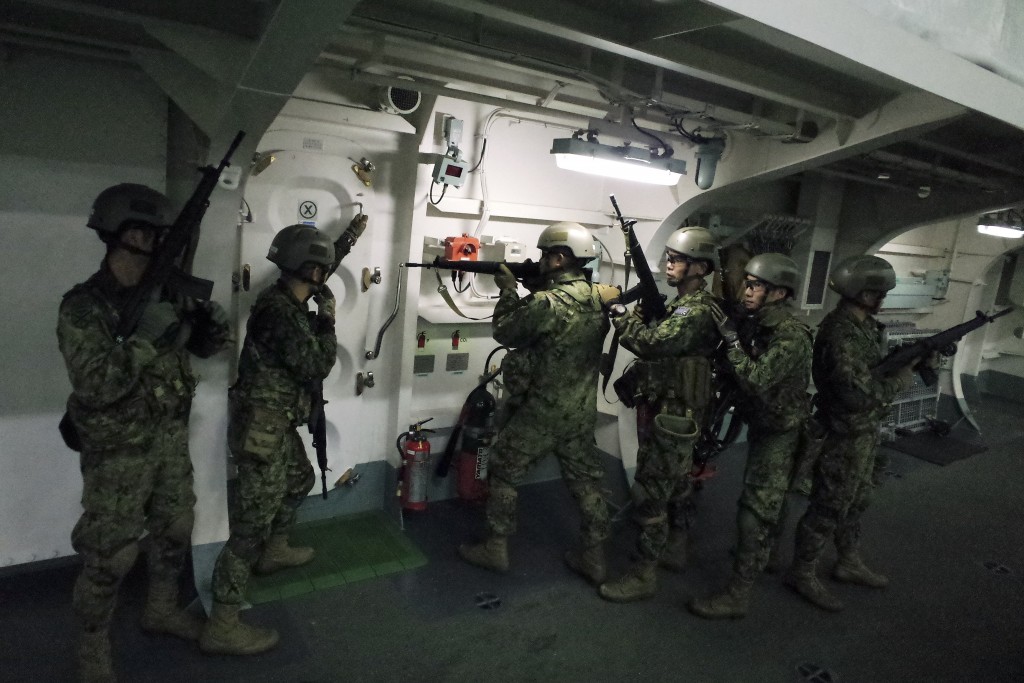 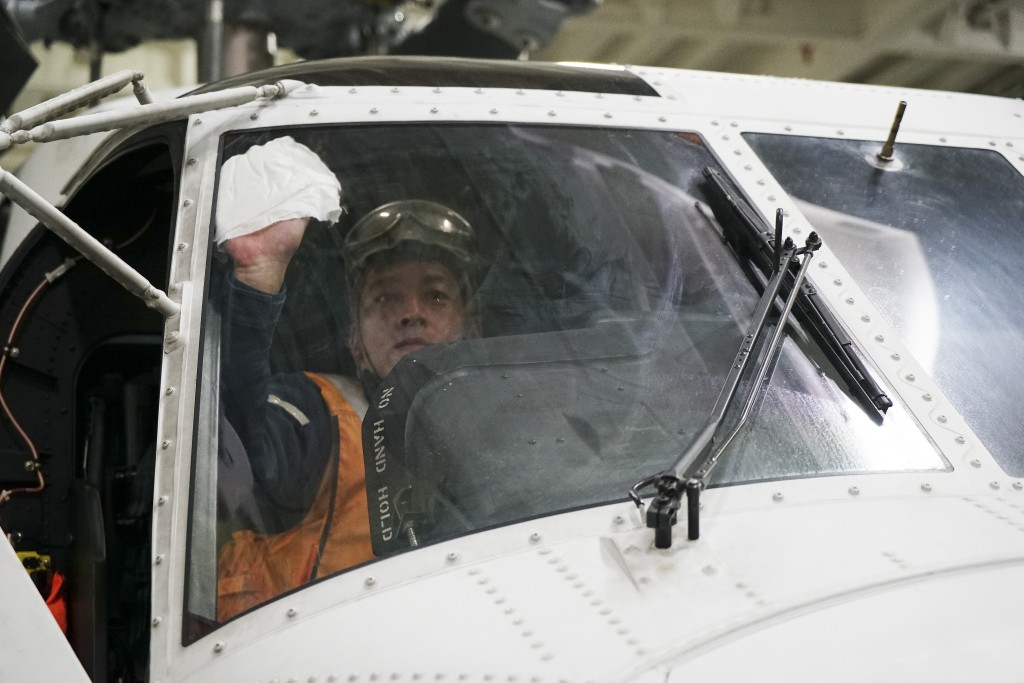 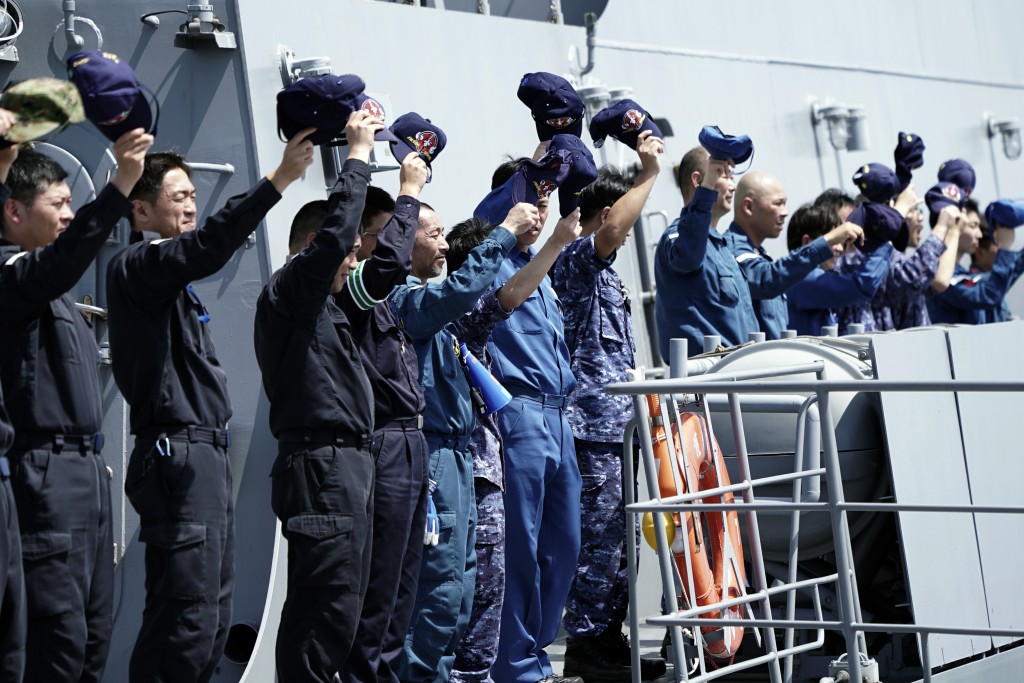 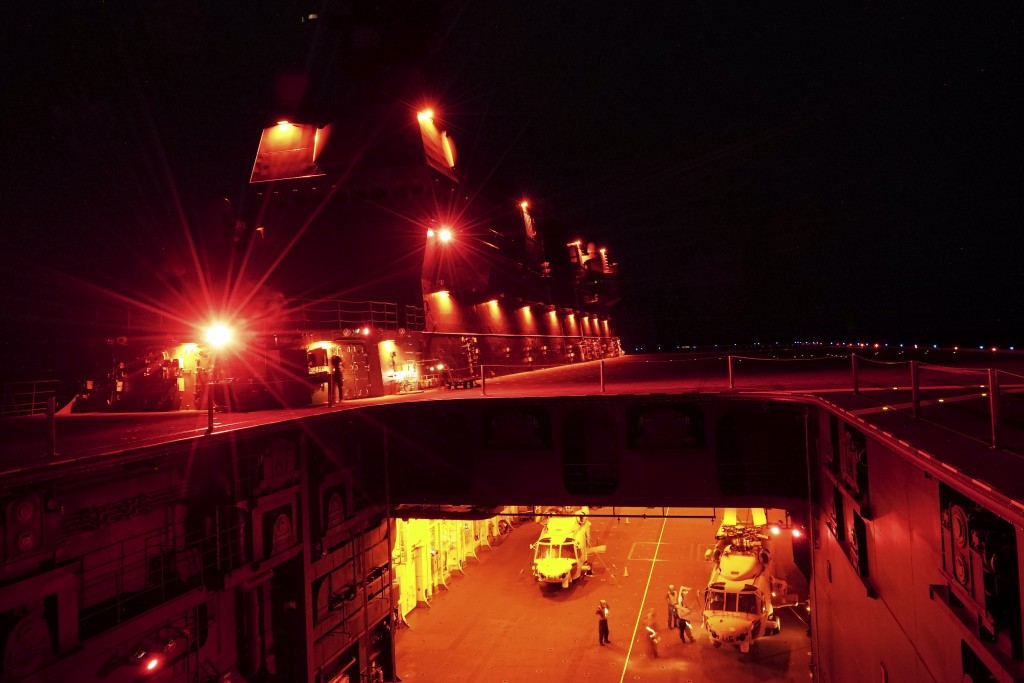 SUBIC, Philippines (AP) — One of Japan's largest warships, the helicopter carrier Izumo, is returning home from Subic port in the Philippines following a powerful show of Tokyo's determination to expand its military presence and counter China's forays into strategic waters.

Subic, a former U.S. naval base, was the Izumo's final stop in a two-month deployment in the Indo-Pacific region at a time of prolonged tensions over maritime territory. The carrier, along with the destroyers Murasame and Akebono, just finished a series of drills with the United States and other countries.

Island nation Japan's ability to project military power beyond its borders is severely constrained by the commitment to pacifism and rejection of use of military force in conflict enshrined in its post-World War II constitution, though in 2015 it was reinterpreted to allow the use of force in defending itself and its allies.

But the Izumo's mission offers a glimpse of where its military is headed: For the first time, troops from a newly formed amphibious brigade of the Ground Self Defense Force participated in an extended naval deployment.

Prime Minister Shinzo Abe has made amending the constitution to allow the military greater leeway one of his lifetime goals. President Donald Trump has sought to help that cause, calling repeatedly for Japan to do more to defend itself under its alliance with the U.S.

In May, Japan conducted its first quadrilateral exercise with France, the U.S. and Australia in the Bay of Bengal. France deployed its flagship nuclear-powered aircraft carrier, the FS Charles de Gaulle, while the United States sent a missile destroyer, the William P Lawrence. Other drills have included Canada, India, Malaysia, Vietnam, Brunei and the Philippines.

Japan is preparing to reconfigure the Izumo to accommodate U.S. stealth fighters, including F-35Bs, after announcing it would purchase 42 of its own. The aircraft are designed to operate with short takeoffs and vertical landings, such as on carriers.

The purchase underscores Japan's growing role in its post-war alliance with the U.S.

"In order to incorporate what was not originally in the design, or something new that had not even been thought of , I think this would require research into many areas, otherwise it wouldn't go well," said Capt. Katsuyoshi Motoyama, the Izumo's commanding officer.

Yasukazu Tanaka of the Amphibious Rapid Deployment Brigade, similar to the U.S. Marines, said the recent exercises were meant to deepen coordination between them and ground troops to facilitate use of the carrier for transporting troops to front lines in the future.

Since the Izumo can accommodate both air and sea transport, "there are great possibilities for us to conduct amphibious operations," he said, though he and all others involved emphasized that the ground and marine troops conducted no joint exercises.

Ground troops are still exploring how best to operate on longer missions, where regulations limit use of live-fire weapons on board. Troops practiced emergency first aid response and trained on the flight deck and in the aircraft carrier hangar deck, at times using guns made of rubber in battle scenarios.

China has been expanding its military presence to press home its determination to defend its claim to virtually the entire South China Sea in the face of challenges by the U.S. and its allies, unnerving many in the region.

The Defense Ministry says Japan's air force scrambled fighter jets 999 times in 2018, the second highest number since it began defending its airspace in 1958. Of that number, 64% were responses to Chinese aircraft.

The U.S. Navy and others have angered Beijing by repeatedly sailing their ships close to Chinese-occupied islands to assert what they say is the right to freedom of navigation. Beijing also has installed advanced weapons systems at several disputed locations, including seven islands it built by piling sand and concrete on top of coral atolls.

Some of those sites are now equipped with airstrips, radar and missile stations, expanding China's ability to monitor and potentially control activity by other militaries in the region.

So far, encounters have been peaceful, but all sides are concerned about the potential for miscalculations that could spark conflict.

Japan's navy also hosted a training program for young representatives from Southeast Asian nations, with lectures on international maritime law, humanitarian and disaster relief programs, and exercises in navigation and communications. Most participants were officers in their 20s and 30s.

"Especially with the territorial and boundaries part, I think that would be vital information for us," said Muhammad Danial bin Matyussof, a junior lieutenant in the Brunei navy. "We have neighboring boundaries with Malaysia and Vietnam, so it could provide insight every time we do patrols."

While the backdrop of the exercises was evident, given China's rising profile, "This Indo-Pacific deployment is not an operation that is aimed at any one specific country," said Hiroshi Egawa, commander of Escort Flotilla One.