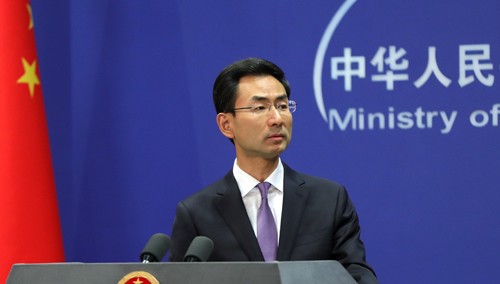 TAIPEI (Taiwan News) — China has once again filed a protest against the United States government for allowing President Tsai Ing-wen (蔡英文) to transit on its territory on her Caribbean trip scheduled for mid-July.

Tsai will embark on a 12-day visit to the country’s four Caribbean allies from July 11-22. She will spend four nights in U.S. cities during the outbound and inbound trips as layovers.

The Chinese government “has expressed concern to the U.S.” over Tsai’s transit plans, said Geng Shuang (耿爽), spokesperson for China’s foreign ministry during a press briefing on Monday. “We urged the U.S. to adhere to the ‘One-China Principle’ and the ‘Three Communiqués,’ and not to authorize Tsai Ing-wen’s transits.”

The U.S. has maintained its long-term “One-China Policy,” which is based on the “Three Communiqués” and the Taiwan Relations Act, said a U.S. Statement Department spokesperson via email, as reported by Central News Agency. It said Tsai’s travel arrangements were made in line with these policies.

The U.S. government has customarily allowed Taiwan’s presidents to make stopovers in the U.S. on their trips to Latin American or Pacific nations. Typically, Beijing lodges a protest against the U.S. as it seeks to restrict official interactions between Taiwan and other foreign governments.

This will be Tsai’s first visit to the U.S. after she secured the ruling Democratic Progressive Party’s nomination (DPP) to run for re-election. Tsai’s itinerary in the U.S. has not been disclosed as of press time.

As the country counts down to the election in less than 200 days, the DPP is mobilizing for the presidential campaign. The party’s chairman, Cho Jung-tai (卓榮泰), is also visiting the U.S. from June 29 to July 9, for meetings with overseas Taiwanese nationals in Washington, D.C. and New York, among other cities.