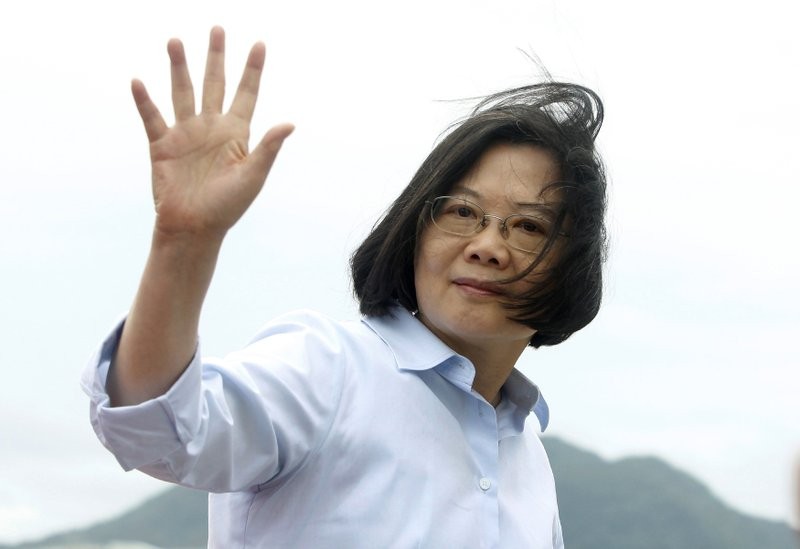 BEIJING (AP) — Recent anti-government protests in Hong Kong are echoing in Taiwan, possibly giving the island’s President Tsai Ing-wen a lift in her campaign to resist Beijing’s pressure for political unification and win a second term in next year’s elections.

That proposal has never found much support among Taiwan’s independence-minded voters. Events in Hong Kong now seem to be handing Tsai even more ammunition to attack opponents who argued that an accommodation with Beijing could be reached.

“People on the street understand that President Tsai took the anti-extradition law episode as a boost for her campaign,” said Andrew Huang, strategic studies professor at Taiwan’s Tamkang University.

That’s created common cause among democracy advocates in the semi-autonomous Chinese territory that reverted to Chinese rule in 1997, and the island democracy and former Japanese colony that split from China amid civil war in 1949.

The Hong Kong protests “highlight that the system clearly designed to entice Taiwan into unification talks has been a dismal failure,” said Western Kentucky University political scientist Timothy S. Rich, a close observer of Taiwanese politics. The emphasis on sovereignty and independence should benefit Tsai and her party by shifting the discussion away from contentious domestic issues such as stagnating wages and reductions in civil service pensions, Rich said.

“Tsai can use the Chinese threat to Hong Kong to reposition herself and her party as protecting democracy, that it is right to be cautious in regards to China and cross-strait relations,” Rich said.

Hong Kong protesters oppose the extradition bills because they could send suspects to mainland China, where they might be exposed to torture and politically biased trials in courts under the control of the ruling Communist Party. That tapped into deeper running concerns over Beijing’s moves to reduce the scope for democracy and civil society in Hong Kong, which was promised it could retain its own Western-style legal, economic and political institutions until 2047.

In Taiwan, that poses a dilemma for the China-friendly opposition Nationalist Party. Despite having won 15 of 22 major seats in last year’s local elections, the party was dislodged from power at the national level in 2016, in part over accusations it was signing away Taiwan’s room to maneuver as an independent political entity.

Beijing responded by cutting ties with Tsai’s government over her refusal to recognize Taiwan as an integral part of China. It has sought to deepen Taiwan’s diplomatic isolation by poaching away allies and barring its representatives from global gatherings, while cutting the number of Chinese tourists and circling it with warplanes to rattle voters’ nerves.

The moves serve China’s narrative that bringing Taiwan under its control is a historical inevitability, a goal President Xi Jinping sees as part of his future political legacy.

Yet Xi appears tone deaf when it comes to appealing to Taiwan’s 23 million residents, who remain overwhelmingly opposed to political unification with China despite closer economic ties.

In a January speech panned across Taiwan’s political spectrum, Xi again endorsed “one country, two systems” as Taiwan’s future, while asserting that the ruling Communists “made no promises to abandon the use of force” to bring Taiwan under their control.

Subsequent policy developments toward both Hong Kong and Taiwan have only added to concerns about Beijing’s intentions, said Steven M. Goldstein, director of the Taiwan Studies Workshop at Harvard University’s Fairbank Center for Chinese Studies.

“Does this benefit Tsai? Perhaps indirectly in the sense that it may complicate her opposition’s efforts to find a more positive formula for relations with the mainland,” Goldstein said.

Tsai would welcome that boost after signs that Chinese pressure and policy stumbles by her administration were cutting into her support. After her Democratic Progressive Party setback in November’s local elections, public opinion surveys put her approval rating as low as 25%, although she has since bounced back.

The appointment of veteran politician Su Tseng-chang as premier has since helped stabilize her administration, while the Nationalists have yet to rally behind a single challenger among a slate of contenders including Kaohsiung Mayor Han Kuo-yu and Terry Gou, who stepped down last month as chairman of Foxconn, the world’s largest contract assembler of consumer electronics for companies such as Apple.

Missouri State University political scientist Dennis Hickey said he expects Tsai’s administration will seek to make the most of the “one country, two systems” issue as a cudgel against her opponents.

While it’s widely understood that the formula has no market in Taiwan, that won’t stop the DPP from accusing its opponents of planning to “sell out Taiwan,” Hickey said.

Still, the Hong Kong protests offer no guarantee of victory next year, said Jessica Drun, fellow at the Center for Advanced China Research in Washington, D.C.

“Numerous other factors are at play, such as economic performance, and voters can be fickle,” Drun said. Most likely, the protests will act as a “moderating force” for candidates in discussing relations with China, she said.

The Hong Kong protests, and the fear of Chinese encroachment on democratic freedoms may “refine the parameters of publicly acceptable discourse” on ties with China, Drun said.