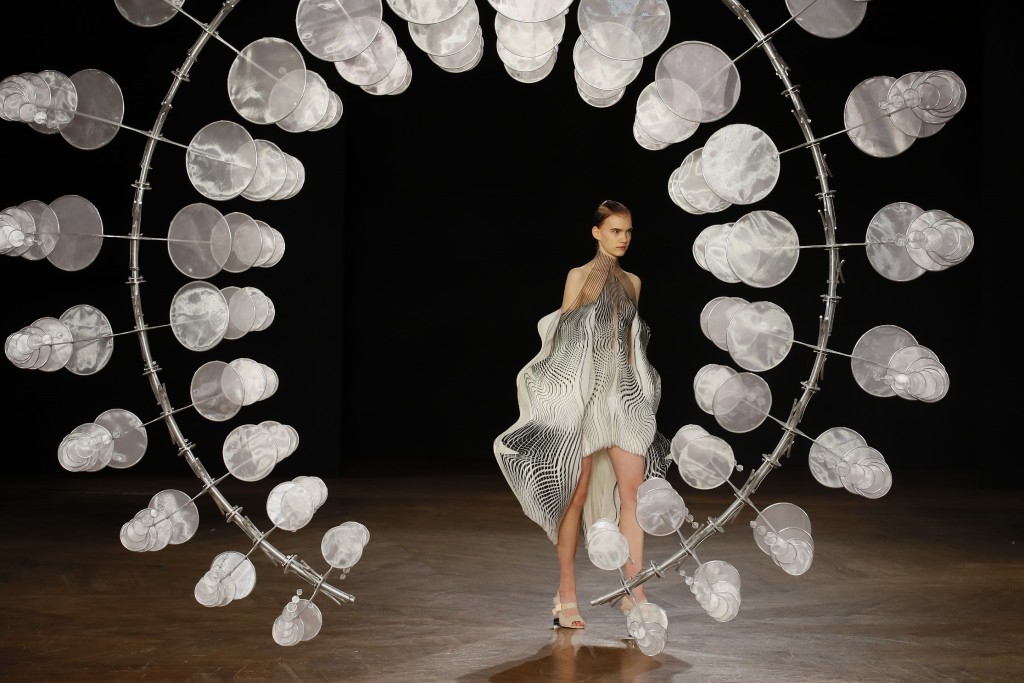 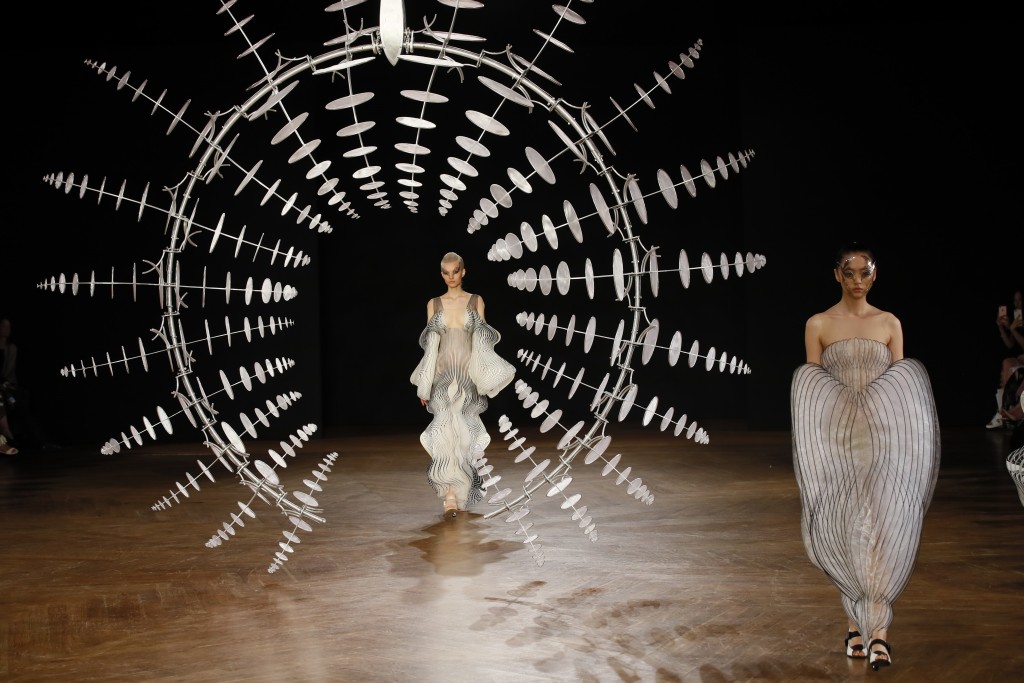 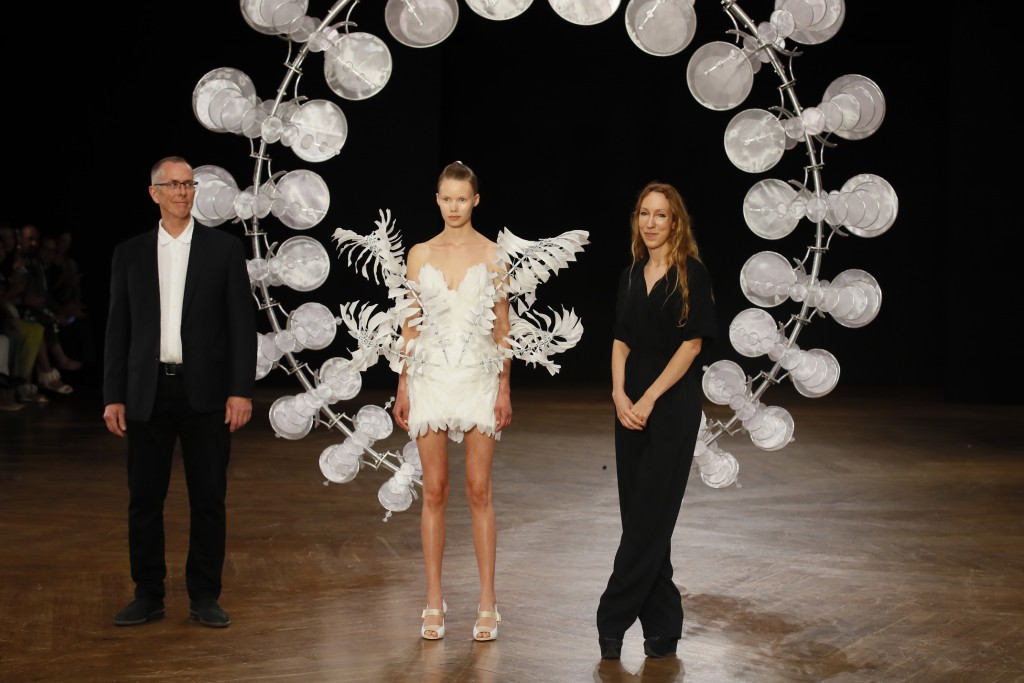 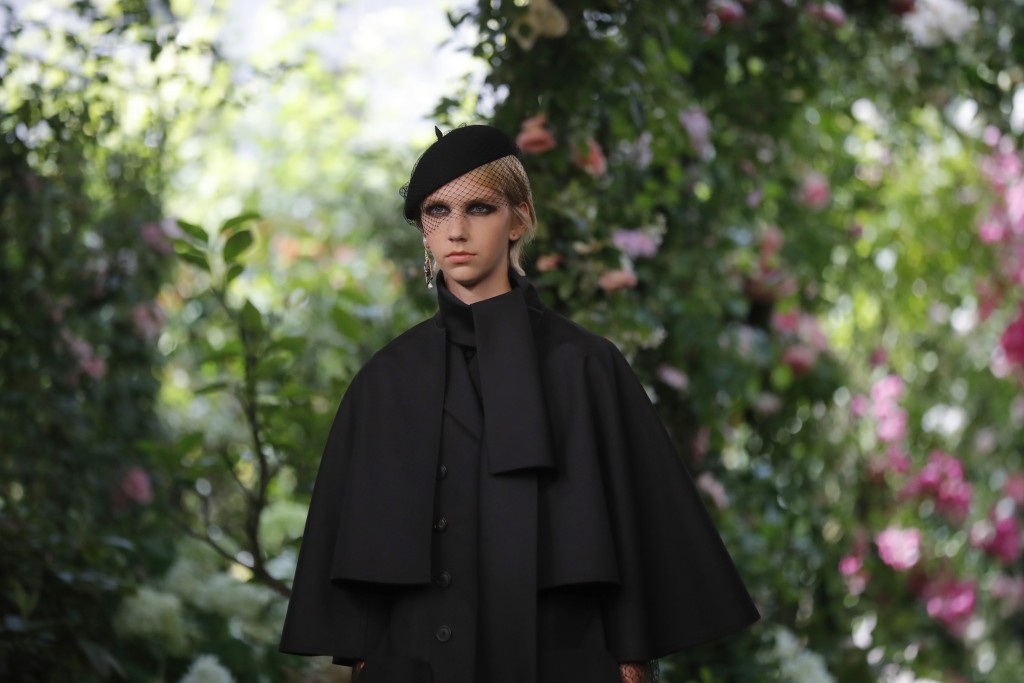 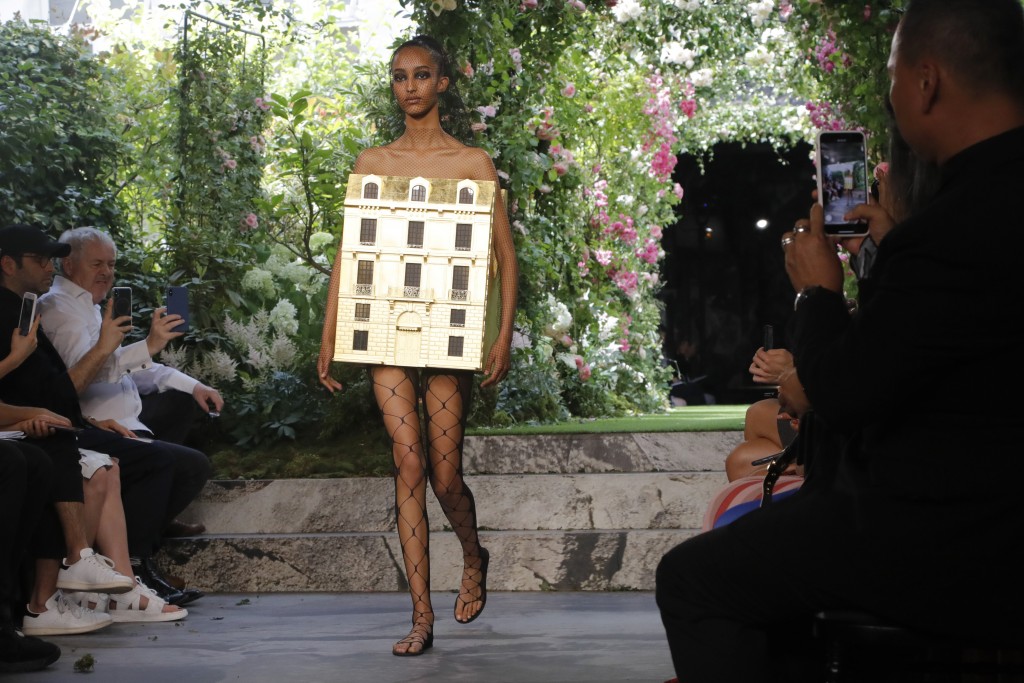 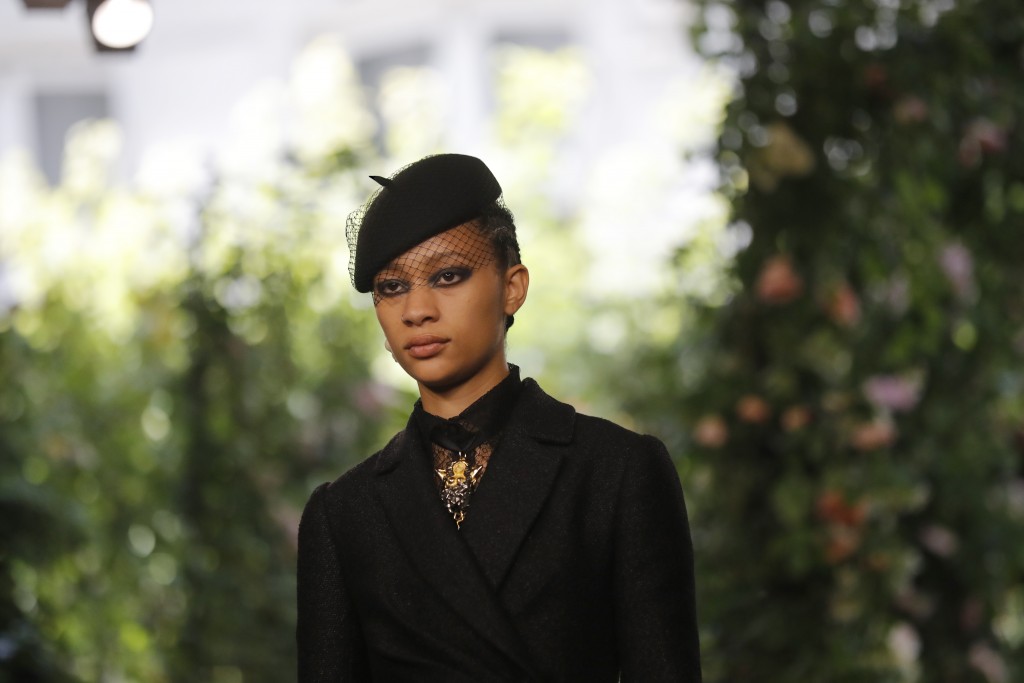 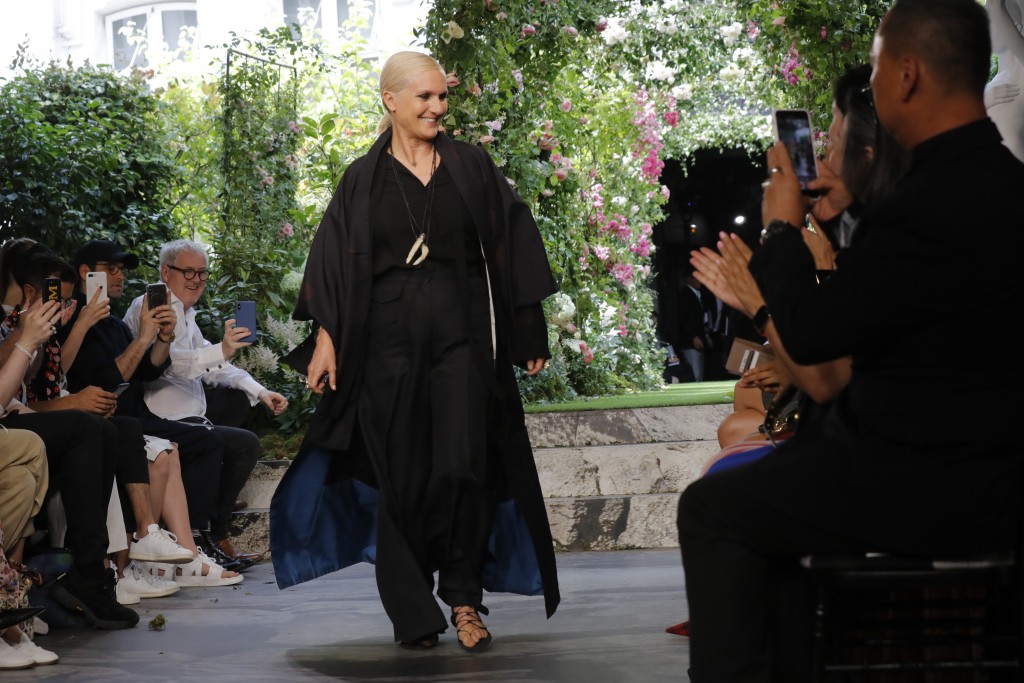 PARIS (AP) — Dior went back to the essential architecture of dressmaking, and the late designer's penchant for black, for a brooding display Monday of archetypally couture fall-winter gowns.

Looking on inside the Parisian house's design studios Monday on Avenue Montaigne were Gal Gadot, Elisabeth Moss and Shailene Woodley, as well as Priyanka Chopra and Nick Jonas, who were fashionably late.

Here are some highlights of the fall-winter 2019 couture collections in Paris.

DIOR GOES BACK TO BLACK

"I could write a book about black," Christian Dior once declared.

Designer Maria Grazia Chiuri used this as a mantra to produce a dramatic display, one that was nearly all in black and featured veiled models in couture that celebrated the power of architecture and the sculptural female form.

Black mesh and sheer catsuits exposed legs, shoulders and arms in sensual transparencies that showed off the body, while dark capes did exactly the opposite and enveloped the body in black taffeta jacquard.

"Designing a collection almost entirely in black, punctuated by rare colors that reveal its power, implies a return to fundamentals, to the foundations of haute couture," explained the house.

Flashes of white provided historic musing — such as one formless ancient Greek tunic in white silk that gained its structure from the curves of the model's body. So too did caryatids, stone sculptures of women that structurally hold up Greek temples, that provided the inspiration for one of the collection's key silhouettes.

Evoking architecture more literally was the final look: A naked model "wearing" a replica of Dior's atelier building made in gold leaf.

This design, which prompted chuckles from guests, was a welcome relief from what was a rather heavy 65-look-collection that suffered at times from being overly repetitive.

Chopra and Jonas arrived almost an hour late for the show, forcing actresses such as Gadot and Woodley to wait. Upon arrival, the couple triggered a media scrum inside the already squeezed Dior atelier.

It provoked grumbles from many of the show's invitees.

Chopra and Jonas were traveling through Paris after attending the wedding ceremony of brother Joe Jonas and "Game of Thrones" star Sophie Turner in the south of France.

As the star of the hit dystopian series about female servitude 'The Handmaid's Tale,' Moss had much to say on female empowerment before she graced Dior's front row.

Moss has won a Golden Globe for her performance of a woman who is captured and forced to become a handmaid because she is fertile — a cynical narrative which shines a light on society's objectification of women.

The series comes at a time when Dior has, too, shone a light on women's issues by naming its first female designer, Maria Grazia Chiuri, who has made female empowerment an emblem of recent collections.

"'The Handmaid's Tale' is part of the same movement as finally having a female designer at Dior," said Moss, on the sidelines of the show.

"We're talking more about women recently across the board and it's wonderful. Maria Grazia has an empowering vision, and Dior is so much about women themselves, rather than just the clothes," she added.

On Monday, the latest chapter of her world was unveiled amid a giant halo of pearly white organic shell discs designed by American artist Anthony Howe. It set the tone for a fantastical, aquatic spectacle.

The fibers and translucence of jellyfish and deep water life were a key theme in the 19 looks.

It produced beautiful trapezoid silhouettes that blurred the lines between fashion and pure art.

One bustier dress, if it can be called that, was made of interlocking semicircles of sheer fabric with a black fibrous edge.

Its stiff collar, while organic-looking, also evoked the historic ruffs of Elizabethan England in a sublime play in contradiction.

Incredibly, Van Herpen also managed to capture the limp gravity of tentacles moving under water in a series of multicolored three-dimensional gowns with divergent, floating layers.

A watery sheen, achieved by ancient silk moiré weaving, made some guests feels as if they were several leagues under the sea.

Ever since the legendary house of Elsa Schiaparelli was relaunched in 2012, design team changes over a short space of time caused turbulence at the brand that struggled to hone a clear artistic voice.

With the appointment of its third creative director in five years, Daniel Roseberry, who was poached from Thom Browne, the brand hopes to change that.

Roseberry's debut couture collection was sassy, playful and modern — and provided lots of reasons why the house should be hopeful.

The 30 creations managed to toe the line between the Schiaparelli signatures — the shocking pink, the 30s elegance, and the touches of Surrealism — with an aesthetic that was contemporary and often very sexy.

A silk bustier dress in marbled segments of eye-popping reds, yellows and blues with sequined cups on the bust was constructed from interlocking strips of material. It flapped playfully at the bottom — part prom-queen, part clown. A long lizard earring only added to the fun.

Elsewhere, a bejeweled python adorned one female model's neck like a shawl on sheer black fabric, exposing the nipples and the vulnerability of human flesh.

CHIURI GETS LEGION OF HONOR

Chiuri is being recognized for her contribution to French culture during her creative tenure at Dior by being awarded one of France's highest civilian awards, the Legion of Honor.

Symbolically, French Minister for Equality Marlene Schiappa will present the honor to Chiuri during a ceremony. Chiuri has made it her hallmark at the LVMH-owned house to trumpet her feminist roots.

Model Natalia Vodianova, who is the partner of LVMH's communications chief Antoine Arnault, told The Associated Press of her joy for Chiuri.

"It's a very happy moment. And I think it's so incredibly deserved for the way she took Dior, not only as a brand, but also as a platform," said Vodianova.

"She helped the movement toward women's equality with everything that she did."