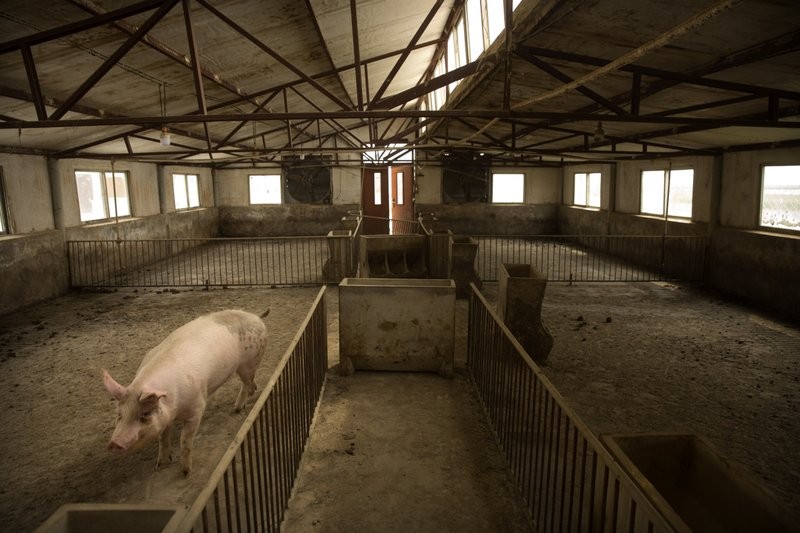 A lone pig in Hebei Province, China (By Associated Press)

TAIPEI (Taiwan News) -- The spread of swine fever is likely much more serious than Chinese authorities admit, as up to half of the pigs in the country have been killed, creating dire problems for China’s neighbors and the local economy.

Multiple sources have revealed that the up to half of the pigs in China have either died from swine fever or been culled as a precautionary measure. The total likely amounts to double the number of deaths as reported by Chinese authorities.

Edgar W. Johnson of Enable Agricultural Technology Consulting indicated that up to 50 percent of the pigs in China have already died. Sources cite the drastic drop in pork product sales as evidence of this, reports Liberty Times.

Chinese authorities reported that the country’s pig population has dropped ten percent since last year. However, experts believe that the real drop in numbers is much larger.

A local farmer in Guangxi Province stated that farmers are not permitted to report cases of swine fever and are afraid of being detained by the government. Guangxi Province is an important part of the pork supply chain in China – there were over 30 million pigs in the province in 2017.

The swine fever epidemic has had catastrophic effects on the Chinese economy, as there is now a pork shortage expected to cause prices to rise by 70 percent. There are 40 million pork farmers throughout China where pork makes up 60 percent of the meat industry.

China’s neighboring countries have been on high alert ever since the outbreak of swine fever in August 2018, when the first case was confirmed in Liaoning Province.

Although borders in the region have been heavily monitored for any porcine products entering from China, the disease has already spread to numerous other countries. The Food and Agriculture Organization of the United Nations (FAO) has expressed concern that the disease may soon spread to the Philippines, Laos and Myanmar.