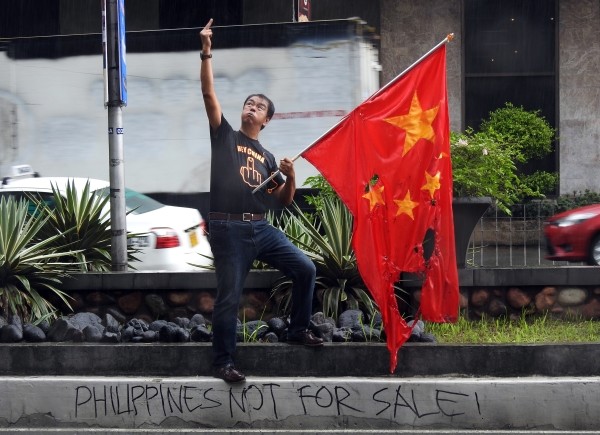 TAIPEI (Taiwan News) -- Waldy Carbonell, a Filipino journalist and political commentator, burned the flag of China and gave the finger to the Chinese embassy in Manila today (July 1) to protest Beijing's encroachment on Philippine waters.

As Carbonell stood on the street below the Chinese embassy in Manila, he torched a flag of China and defiantly flipped his middle finger at the staff inside. He also donned a black T-shirt which read "Hey China" which also included the vulgar hand gesture, while the words "Philippines not for sale" could be seen scrawled on a curb below his feet.

Carbonell told CNA that he burned the Chinese flag in front of its embassy to protest against Beijing's bullying and its "gradual invasion of the Philippines." Carbonell's gesture comes after a Chinese fishing vessel sank a Philippine fishing boat and abandoned its crew of 22 to be left swimming in the ocean on June 9.

The Western Command Spokesman of the Armed Forces of the Philippines (AFP), Lieutenant Colonel Stephen Penetrante, stated that the AFP had determined that incident in the South China Sea was “far from accidental,” reports Rappler. However, Philippine President Rodrigo Duterte refused to comment on the issue until June 17, when he downplayed it as merely a "maritime incident." On June 26, Duterte then announced he had reached an agreement with Chinese President Xi Jinping to allow China to fish in the Philippines' Exclusive Economic Zone (EEZ). Presidential spokesperson Salvador Panelo told the media on July 1 that the 2016 ruling by the Permanent Court of Arbitration, which concluded that Chinese fishing vessels routinely violated the Philippines' sovereignty in its EEZ, cannot effectively be enforced.

Critics are outraged by Duterte's capitulation to China, with Senior Associate Justice Antonio Carpio issuing a statement saying that it is unconstitutional to allow Chinese fishermen to trawl in the Philippines' EEZ. Former Foreign Affairs Secretary Albert del Rosario believes that this is an impeachable offense telling ABS-CBN News that "The Constitution states that the president and the military must secure the national territory, and the national territory includes the exclusive economic zone. To violate that is really a basis for impeachment, he can be impeached."

Carbonelle was highly critical of Duterte, telling CNA, "I never agreed with his foolish position. He should be kicked. If he was here, I would kick him." Carbonell is not alone in his outrage at China's encroachment and Duterte's acquiescence, with many throngs of Filippino protestors gathering outside the embassy in recent weeks.