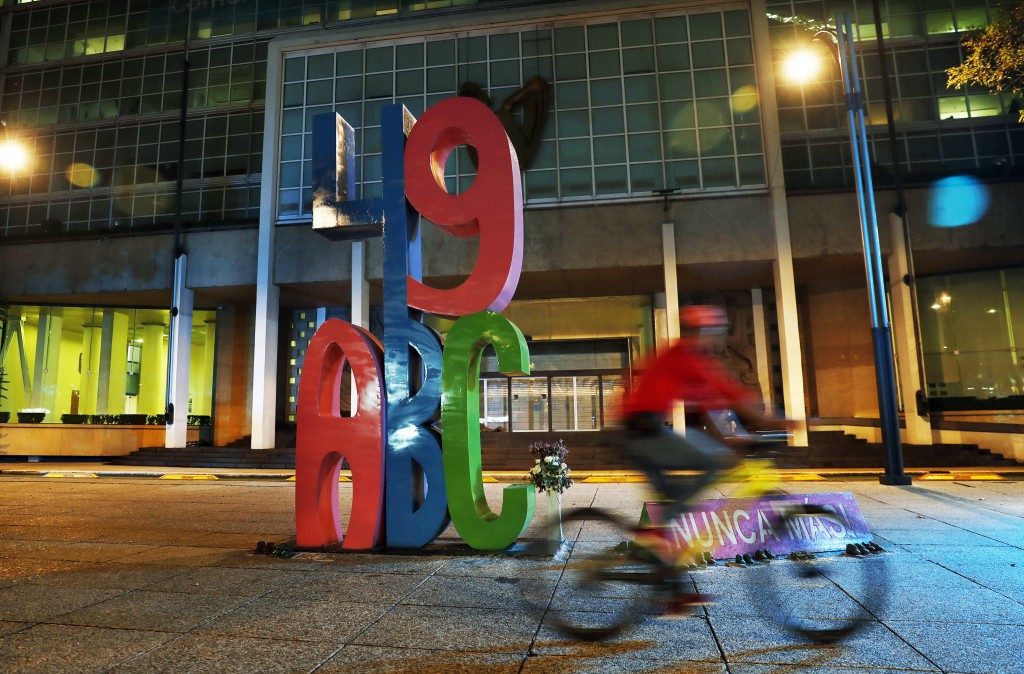 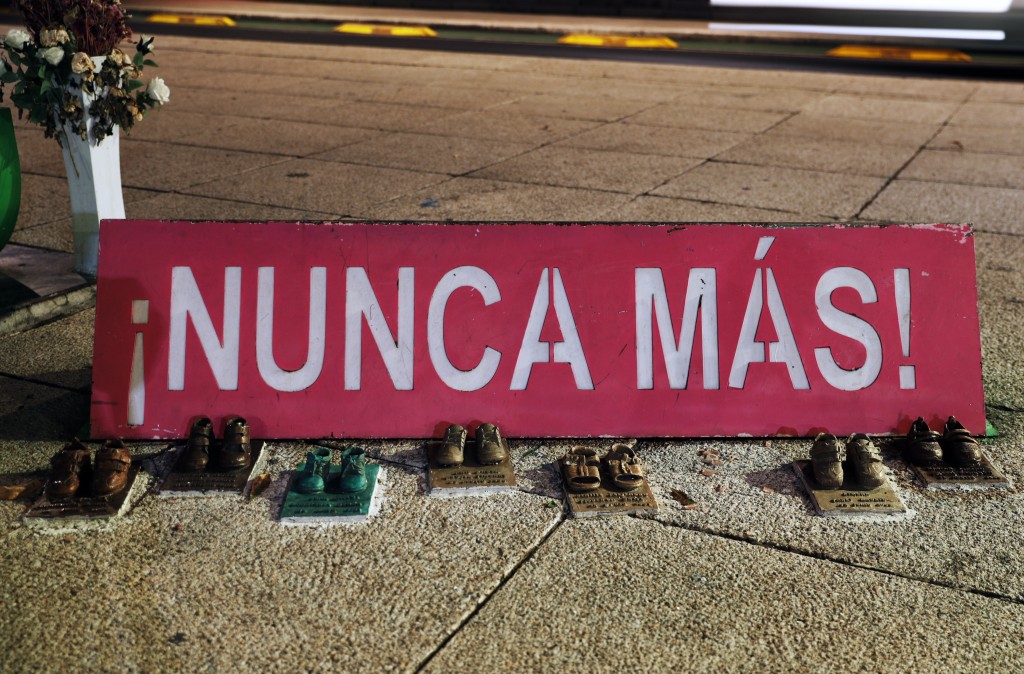 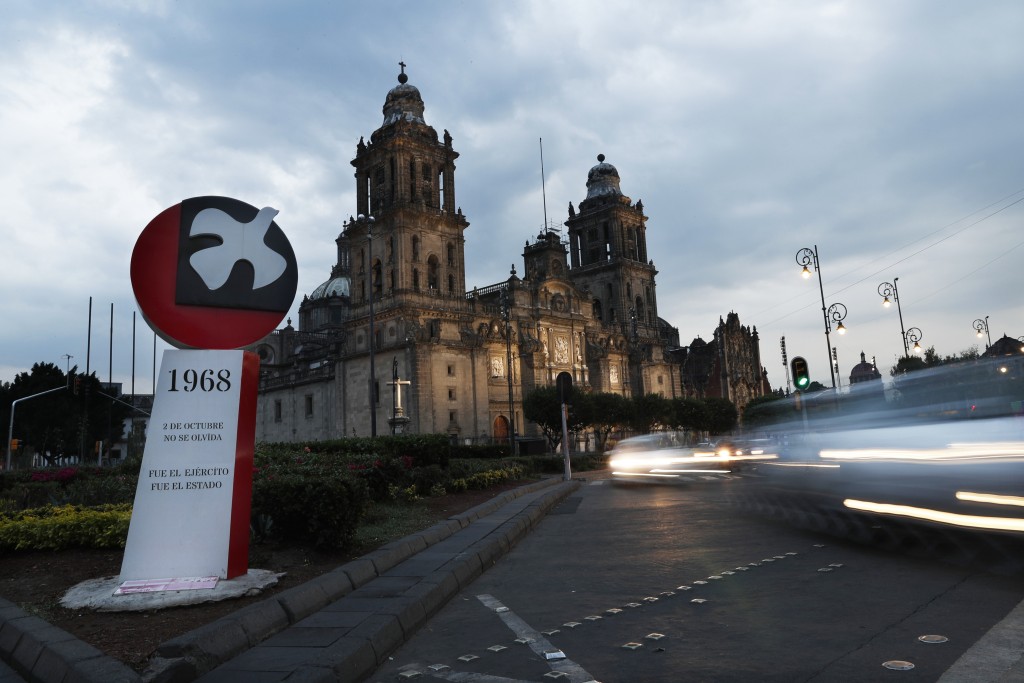 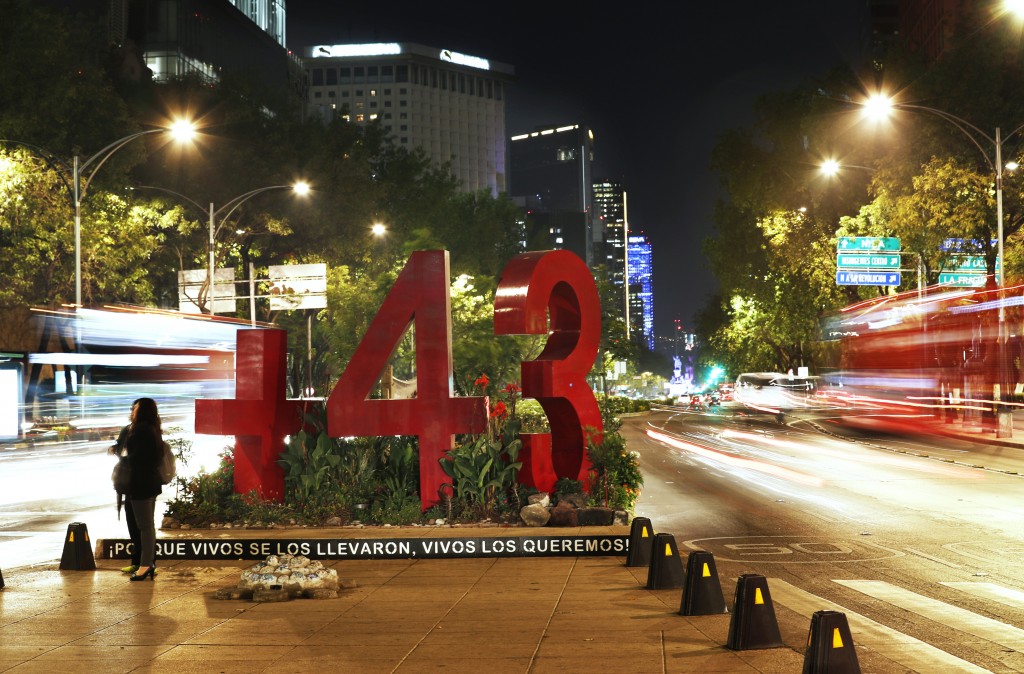 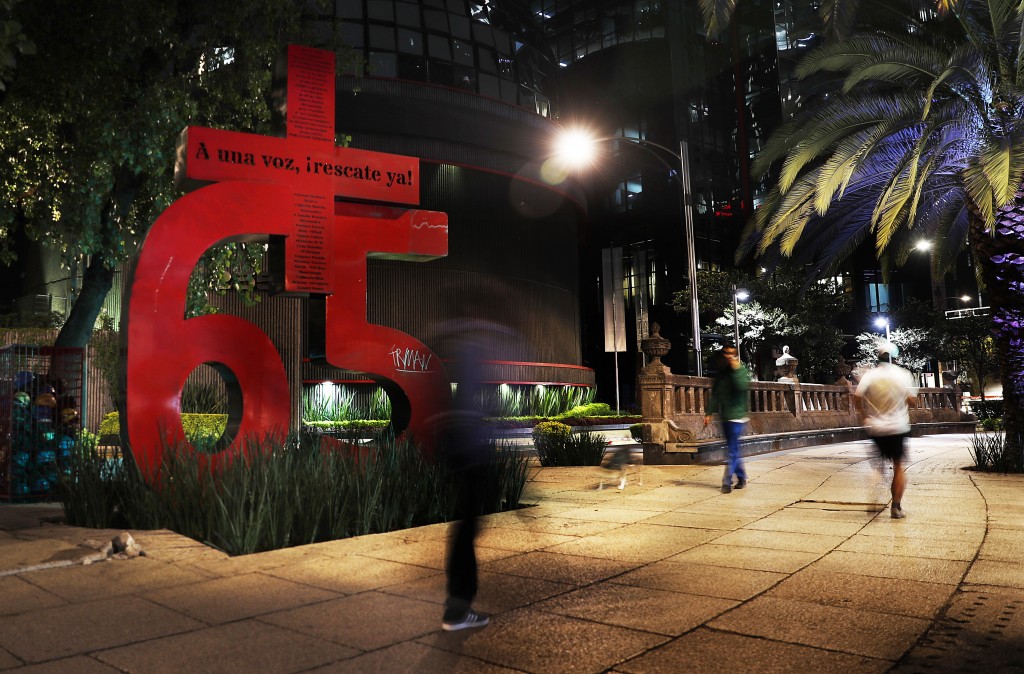 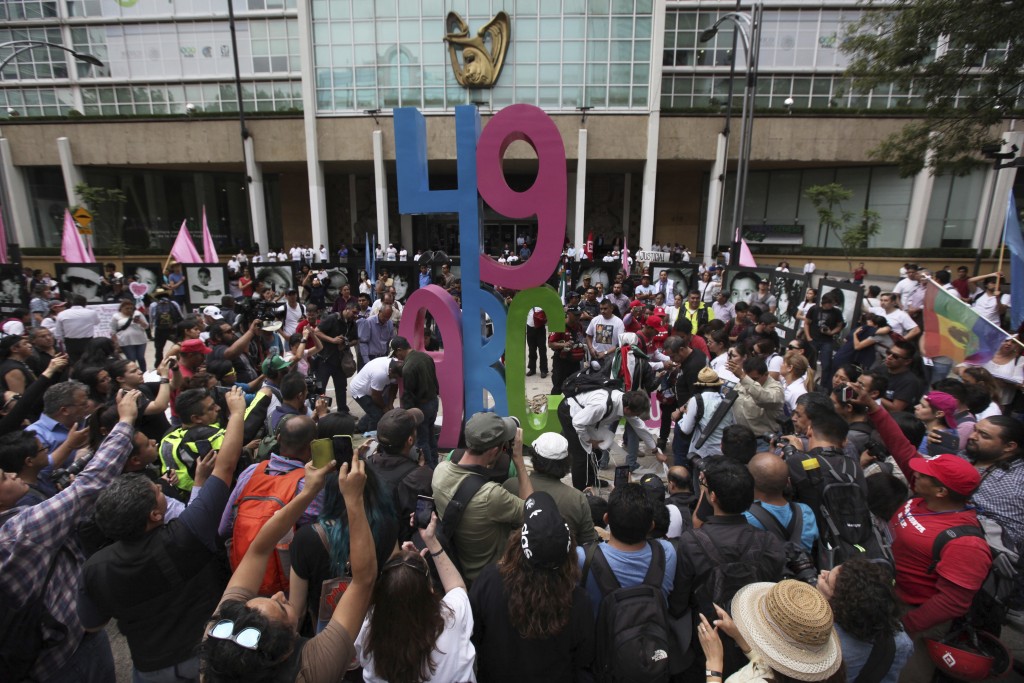 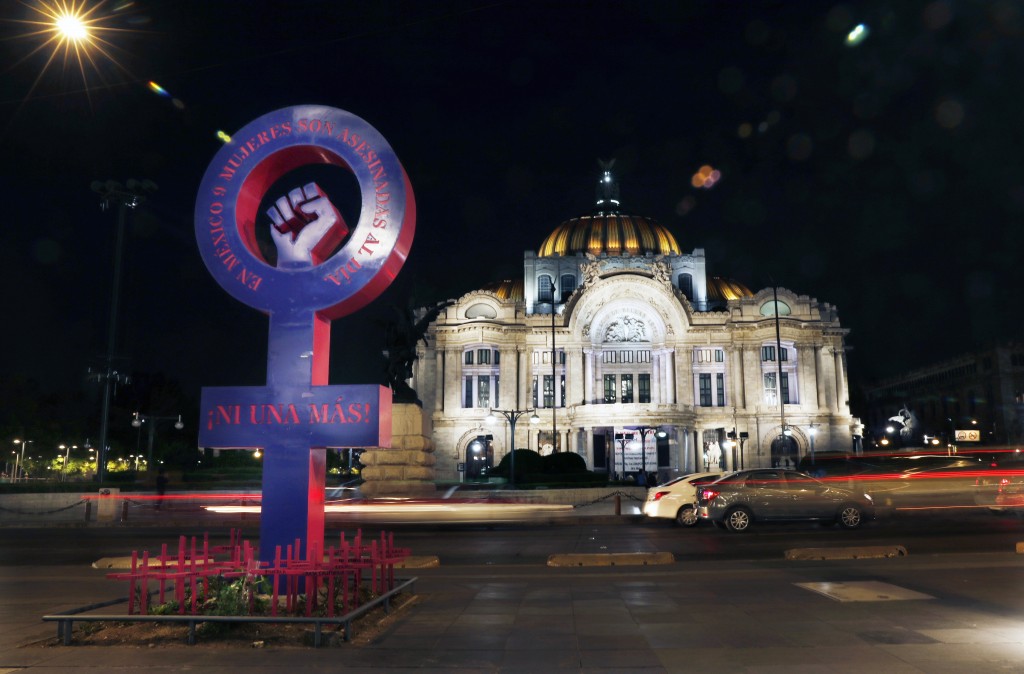 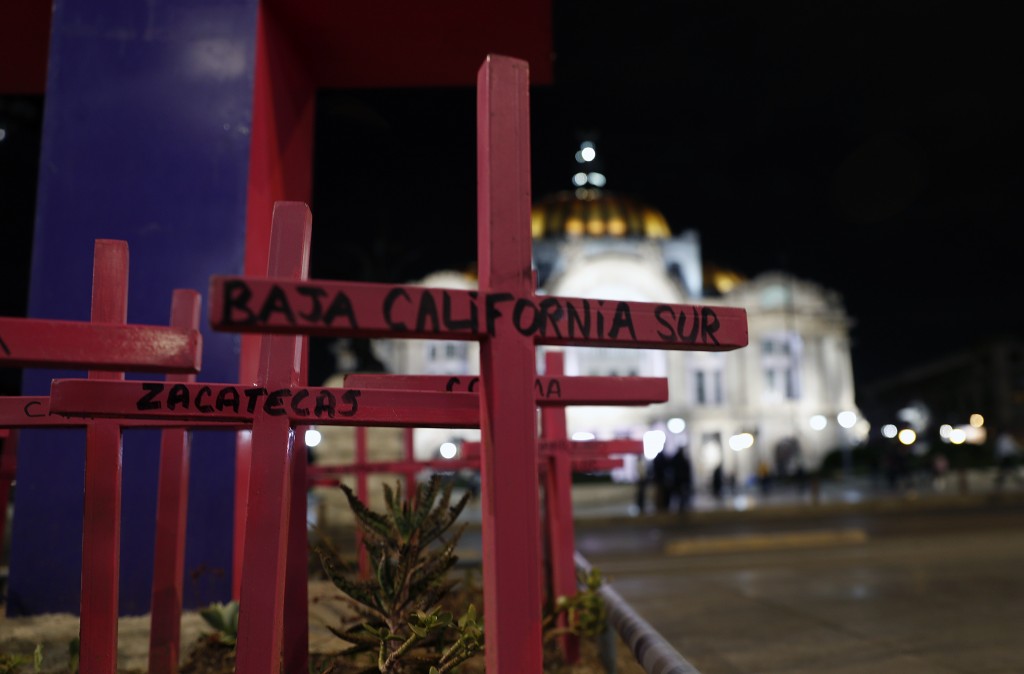 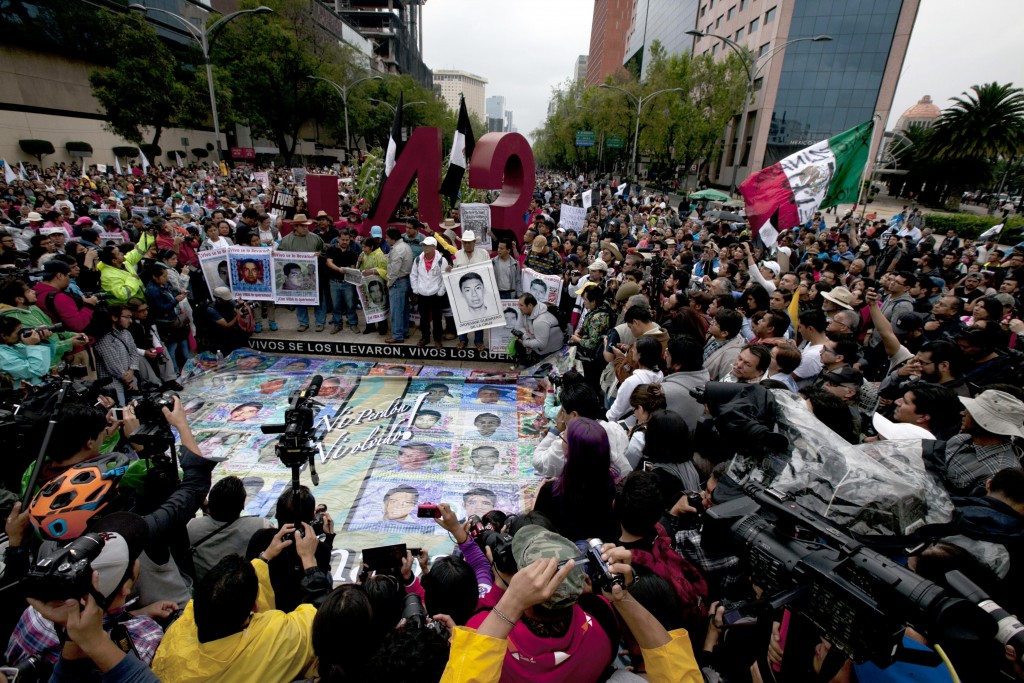 MEXICO CITY (AP) — On the sidewalk outside the Mexican Social Security Institute, like alphabet blocks stacked in a playroom, there's a large metal installation of the letters ABC and the number 49, painted in bright pink, blue and green that evoke the joy of childhood.

ABC is the name of the government-run daycare center that went up in flames in northern Mexico in 2009, and 49 is the number of children who died there. Another 70 children were injured. None of the 19 people charged in the tragedy has served a day in prison, and for the last two years this guerrilla monument has stood defiant at the doorstep of the responsible institution, silently demanding long-denied justice.

Mexico City's Paseo de la Reforma, a grand thoroughfare of high-rise office buildings, swanky hotels and government offices, is dotted with ornate statues commemorating notable moments in Mexican history such as independence from Spain and Christopher Columbus' arrival in the Americas. More recently a collection of impromptu, semi-permanent structures like the ABC sculpture has sprung up on and around the boulevard to remind passers-by — and public officials — of painful incidents of violence, repression, ineptitude and, most of all, impunity.

In front of the Mexican Stock Exchange, the bright red number 65 pays homage to the dozens of coal miners killed in a 2006 explosion in Coahuila state. Sixty-three bodies remain buried underground, and only in May did President Andrés Manuel López Obrador promise to recover them after years of refusals by the mine owner and previous administrations. It's inscribed with the message: "In one voice, rescue already!"

Elsewhere, a purple circle with a cross underneath, the internationally recognized symbol for the female sex, and a raised, clenched fist demand "no more killings of women." At its base, there's a somber garden of pink crosses bearing the names of Mexican states.

What have come to be known as "anti-monuments" are installed during protests, rooted deep into the ground with metal and concrete pillars to help ensure permanence and guarded the first night in shifts by volunteers.

After that they become part of the urban landscape as no government official has dared remove them, perhaps allowing them to serve as relief valves for accumulating tensions and frustrations.

"It's an expression of how fed up society is," said Liliana Veloz, executive director of the Network for Accountability at the Mexican research university CIDE.

The blaze at the ABC daycare in Hermosillo, Sonora state was seen as an avoidable tragedy that happened due to negligence. There were no smoke detectors or fire extinguishers at the facility, and the emergency exit was jammed.

At the anti-monument on a recent June morning, the 10th anniversary of the fire, Loanna Cabanillas read aloud the 49 children's names while other parents intoned after each one, "They shouldn't have died."

Cabanillas, whose son Daniel Alberto died at ABC three months after his second birthday, said she came to the capital on this day of mourning to fight for justice and for safer conditions in childcare centers. At least 88 children have died in Mexican government daycares since the ABC fire.

"We have to be heard," Cabanillas said.

Pedro González choked up when he heard the name of his daughter, Nayeli Estefania, who was nearly 4 when she died.

Holding a picture of her smiling face painted with butterfly wings, he said his favorite memory of Nayeli Estefania was of her rushing to say goodbye as he headed to work in the mornings.

"Did you forget something?" she would ask, then say: "I love you so much, Daddy."

"I don't want her to be forgotten," González said. "She was here."

On the anniversary, the parents drilled holes into the sidewalk to add plaques with names, birthdates and 25 bronze replicas of their children's shoes. Then they cut down a black banner draped across the Social Security Institute's front door, saying its commemoration of the deaths was insulting when those presumably responsible remained free.

While officials have not demolished the anti-monuments, the installations are vulnerable to thieves and vandals. Someone made off with eight pairs of the bronzed shoes, just days after they were drilled into place. City prosecutors have opened an investigation into the theft.

Julio César Márquez, whose son Yeyé perished in the fire, said the parents were saddened to hear of the theft. "You would expect a minimum of respect," he said.

Just a few blocks up Reforma, the number 43, painted fire engine red, sits in a traffic median surrounded by flowering plants and succulents. They were planted by relatives of 43 students from the Ayotzinapa Rural Teachers' College who in 2014 were abducted by police, handed over to drug gang members and never heard from again.

Victims' families and many others doubt the official version from prosecutors that their bodies were burned beyond a trace at a garbage dump, and the incident remains one of the country's rawest open wounds.

A homeless man has adopted the role of caretaker, watering the plants daily and plucking weeds. Relatives have also installed a collection of tile-encrusted turtles — Ayotzinapa means "place of the turtles" in the indigenous Nahuatl language.

Speaking over the wail of a police siren, a grinding organ and cars swishing past the sculpture, art historian Alberto Híjar said the anti-monuments are a way of occupying public space more permanently than with protest marches. They are placed in high-traffic areas but without blocking pedestrian or vehicle flows.

"History is also the history of repressions, massacres, state terrorism — regrettably on the rise right now," he said.

His daughter, Cristina, who also studies art in public spaces, calls the anti-monuments "visual alerts" to evoke empathy and remind Mexican leaders of their debts to society.

She points to another anti-monument across the street that memorializes two young men who were kidnapped and vanished in 2012 while driving from the capital to a Pacific Coast town. Five people are abducted every day and 90% of murders go unsolved in Mexico.

"We could make a list," Cristina Híjar said, "of the anti-monuments that we still need."