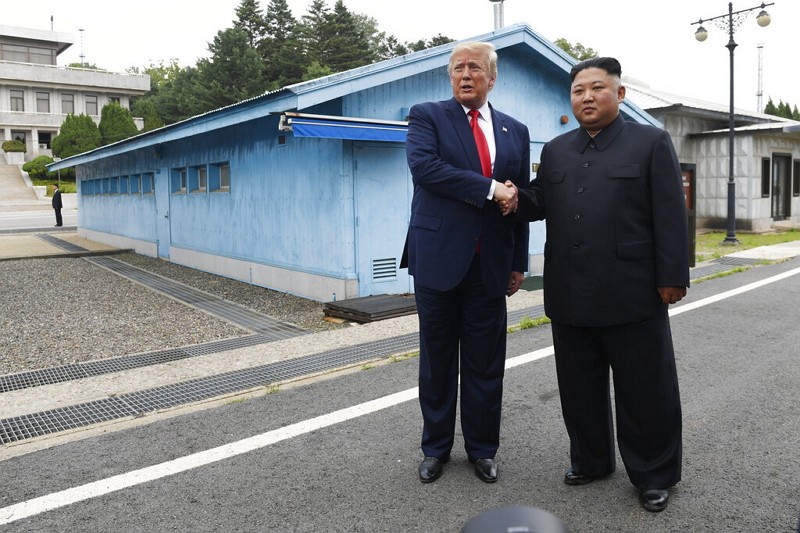 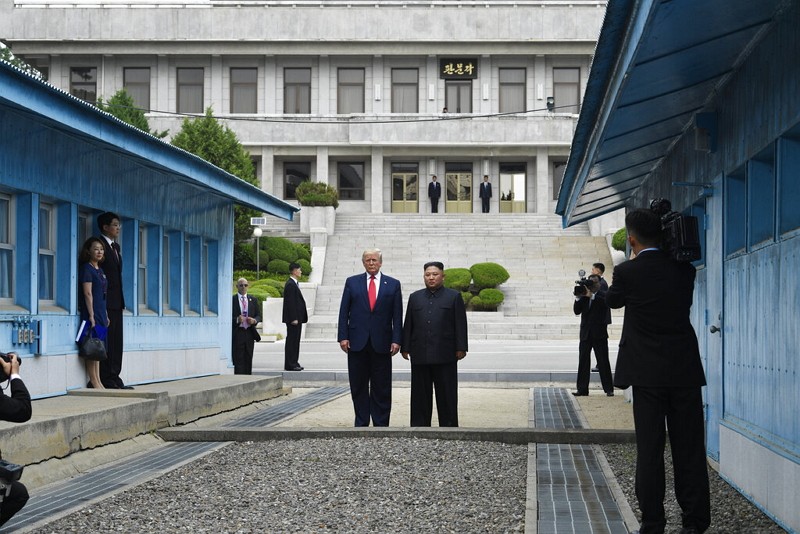 President Donald Trump says the U.S. and North Korea have designated teams to resume stalled nuclear talks between the nations within weeks.

Trump shared the news as he briefed reporters after spending about 50 minutes in talks behind closed doors with North Korean leader Kim Jong Un.

Trump says he hopes the sides can reach a comprehensive deal, but says that “speed is not the object.”

He says: “We’re not looking for speed. We’re looking to get it right.”

What was originally supposed to be a brief exchange of pleasantries between President Donald Trump and North Korea’s Kim Jong Un at the raised line of concrete marking the border between North and South has turned into private talks stretching about 50 minutes.

Trump had tweeted out his last-minute invitation to Kim, suggesting the North Korean leader meet him “at the Border/DMZ just to shake his hand and say Hello(?)!” during a long-scheduled visit.

Trump later said that if Kim made the trip, the two would “see each other for two minutes,” adding: “That’s all we can. But that will be fine. ”

Trump and Kim’s second summit in Hanoi earlier this year ended without a deal.

Trump was joined in the Freedom House conversation with Kim by his daughter and son-in-law, Ivanka Trump and Jared Kushner.

Trump escorted Kim from “Freedom House” on the South Korean side of the zone back to the concrete line marking the border between the two nations.

Trump says, “We just had a very good meeting with Chairman Kim.”

He adds: “This was a very legendary, very historic day.”

Also roughed up in the fracas was incoming Press Secretary Stephanie Grisham, who ended up with bruises.

The jostling grew especially intense as reporters tried to enter a room inside the Freedom House on the southern side of Panmunjom where Trump and North Korea’s Kim Jong Un were meeting after exchanging initial handshakes on the border.

North Korean guards tried to physically prevent members of the U.S. press pool from entering the room, pushing and shoving, and the Secret Service stepped in to intervene.

President Donald Trump says he “was proud” to step over the demarcation line between North and South Korea, becoming the first U.S. president to enter North Korea.

Trump is telling reporters as he meets with Kim Jong Un in a building named The Freedom House on the South Korean side that “the world is watching.”

He’s also thanking Kim, saying that if the North Korean leader hadn’t shown up for the meeting, the press would have made Trump look bad.

Kim said he was surprised by Trump’s last-minute invitation to meet at the Korean Demilitarized Zone on Sunday. But he says he hopes the meeting “can be the foundation for better things in the future.”

President Donald Trump is calling it a “great honor” to have become the first American president to cross the Korean Demilitarized Zone into North Korea.

Trump tells reporters as he stands with North Korean leader Kim Jong Un that it “feels great” to make the historical walk as he hails his “great friendship” with Kim.

Speaking through a translator, Kim commended Trump for crossing the demarcation line, which he called a “courageous and determined act” that “means that we want to bring an end to the unpleasant past.”

Trump also said he would invite Kim to visit the White House moments after Kim crossed the demarcation line himself and entered into South Korea.

President Donald Trump and North Korea’s Kim Jong Un shook hands across the border at the Korean Demilitarized Zone, in an historic photo-op as Trump seeks to make a legacy-defining nuclear deal with the North.

It is the third time the two leaders have met, and the first since a failed summit on the North’s nuclear program in Vietnam earlier this year. Trump briefly crossed the border into North Korea after greeting Kim.

There are as yet no indications of a breakthrough in the stalled negotiations to end the North’s nuclear program.

President Donald Trump is meeting with several dozen troops stationed at the Korean Demilitarized Zone separating South and North Korea and telling them, “We’re with you all the way.”

The troops include both U.S. solders as well as South Korean troops.

Trump was joined by South Korean President Moon Jae-in, who is praising Trump for deciding to meet shortly with North Korea’s Kim Jong Un. He’s calling it “a bold decision”

Trump has at times appeared to question the value of keeping U.S. troops on the Korean Peninsula in light of the U.S.-South Korea trade deficit.

President Donald Trump is griping about the press not giving him sufficient credit for improved U.S. relations with North Korea as he pays an historic visit to the Korean Demilitarized Zone.

Trump is telling reporters as he stands atop Observation Post Ouellette that there has been “tremendous” improvement since his first meeting with the North’s leader Kim Jong Un in Singapore last year.

Trump says the situation used to be marked by “tremendous danger,” but that, “After our first summit, all of the danger went away.”

And he’s chastising reporters, saying “they have no appreciation for” for changes in the North, which he’s calling a “very different place.”

Trump has been criticized for meeting again with Kim when the North continues to test short-range missiles and has not moved forward with a pledge to denuclearize.

President Donald Trump is getting his first glimpse of North Korea from an observation post in the Korean Demilitarized Zone.

Trump, wearing a suit, is being shown various landmarks as he stands atop Observation Post Ouellette.

It’s his first stop on his first visit to the border between the North and the South, which will include another face-to-face meeting with North Korea’s Kim Jong Un. His last attempted visit was thwarted by bad weather.

President Donald Trump is making his first visit to the Korean Demilitarized Zone ahead of a meeting with North Korea’s Kim Jong Un.

Trump arrived by helicopter Sunday near the Panmunjom truce village. He was also expected to visit an observation post and greet U.S. and South Korean troops.

Trump told reporters at a news conference with South Korean President Moon Jae-in that he and Kim will “just shake hands quickly and say hello” at the historic meeting at the Korean border village.

Trump on Saturday invited Kim to meet him at the border for a symbolic handshake. He expressed openness to briefly crossing into North Korean territory if Kim accepted.

Every president since Ronald Reagan has visited the 1953 armistice line, except for George H.W. Bush, who visited as vice president.

President Donald Trump is on his way to the Korean Demilitarized Zone for a historic meeting with North Korea’s Kim Jong Un.

Trump departed Seoul by helicopter on Sunday afternoon shortly after South Korean President Moon Jae-in announced that Kim had accepted Trump’s invitation to meet at the heavily fortified site at the Korean border village of Panmunjom.

Trump told reporters before departing that he looked forward to seeing Kim and to “shake hands quickly and say hello.”

The meeting is set to mark yet another historic first in the yearlong rapprochement between the two technically warring nations. It also marks the return of face-to-face contact between the leaders since negotiations to end the North’s nuclear program broke down during a summit in Vietnam in February.