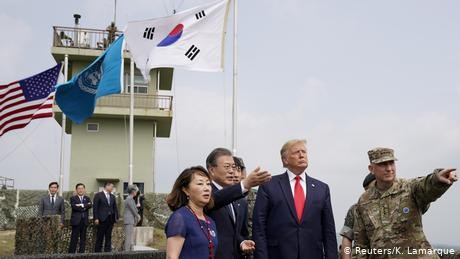 US President Donald Trump has shaken hands with North Korean leader Kim Jong Un at the Korean Demilitarized Zone (DMZ). Trump is the first sitting US president to visit the DMZ.

Trump, who is on a visit to South Korea, earlier confirmed that he would meet Kim at the DMZ that separates the Korean Peninsula.

South Korean President Moon Jae-in had said earlier on Sunday that Kim and Trump "will have a handshake for peace standing at Panmunjom, the symbol of division," referring to the "truce village" in the DMZ.

The DMZ has layers of barbed wire, mines and other security measures, as the two Koreas are still technically at war.

Trump held talks with Kim in Vietnam in February. The Hanoi summit followed on from an unprecedented meeting between the leaders in Singapore last June. Then, Kim pledged to work toward the "complete denuclearization" of the Korean Peninsula, without providing a clear timetable or roadmap.

Washington and Pyongyang blame each other for the impasse, but Trump is hopeful for a breakthrough.

Experts have warned that North Korea may never agree to fully give up its nuclear ambitions, which they say Pyongyang views as vital for regime survival.

Ahead of the meeting, the US president once again spoke about his good relationship with Kim, hailing a "certain chemistry" between them.

Although his previous two meetings with the North Korean leader didn't yield any result, Trump said he was "in no rush" to defuse tensions on the Korean Peninsula.

South Korean President Moon said he would also travel with Trump to the DMZ, adding that Kim and Trump would hold a more formal meeting at a later date.

"I think when the third US-North summit will be held depends on what change today's meeting and dialogue could generate," said Moon.

"Continued dialogue is very practical and the only method to bring about peace on the Korean Peninsula," added the South Korean head of state.