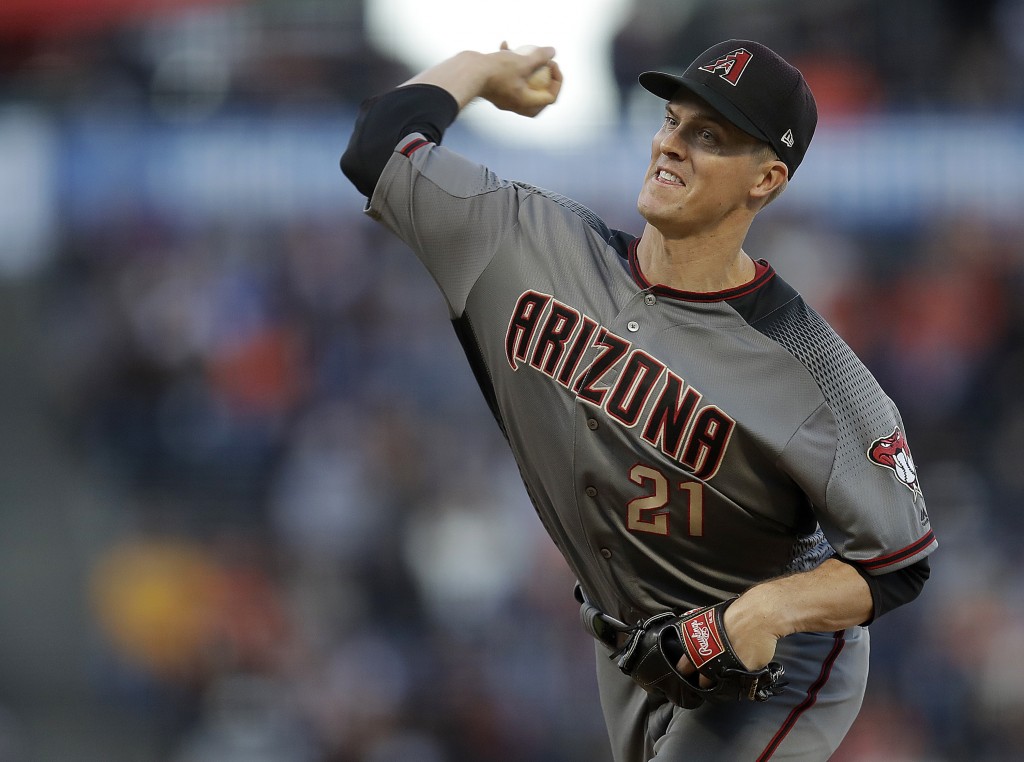 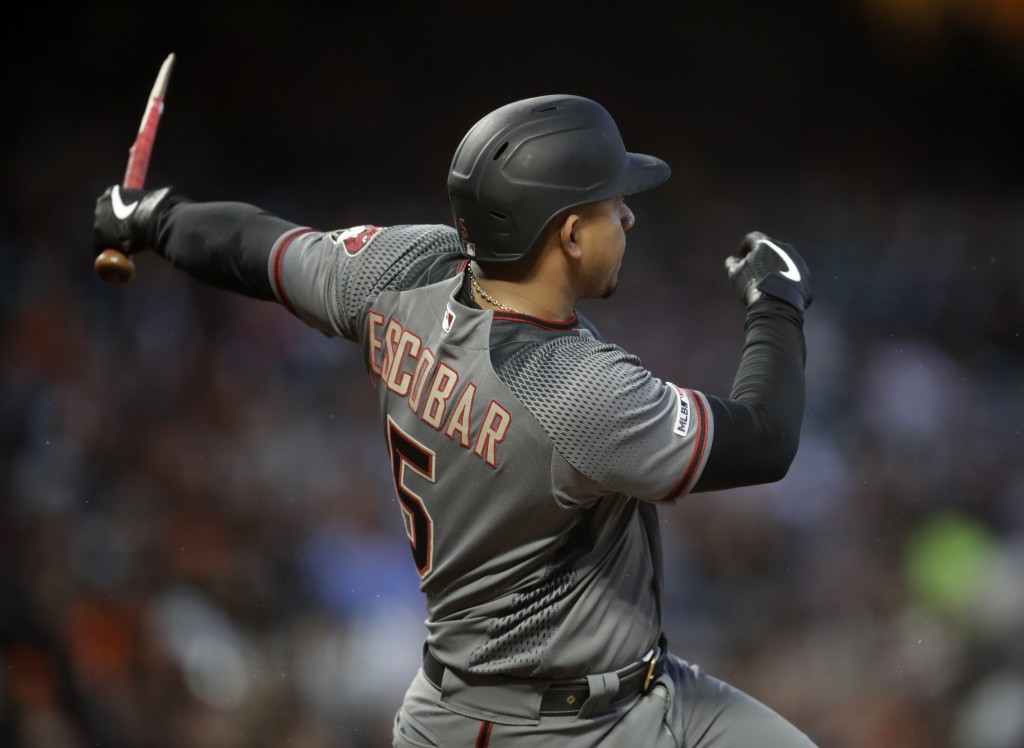 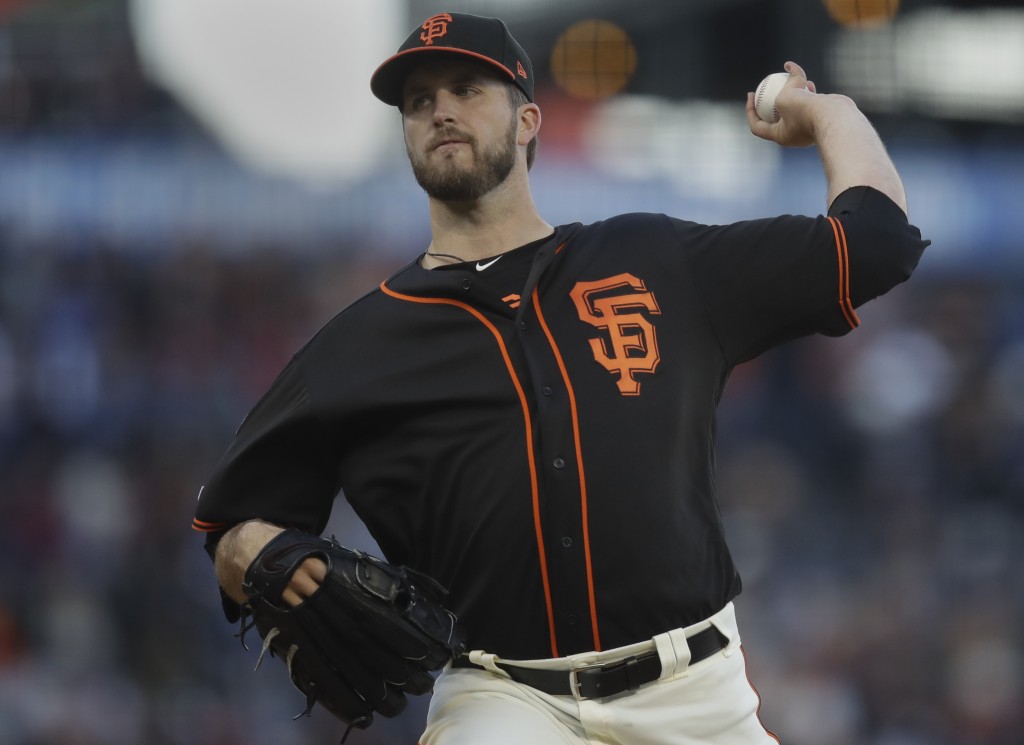 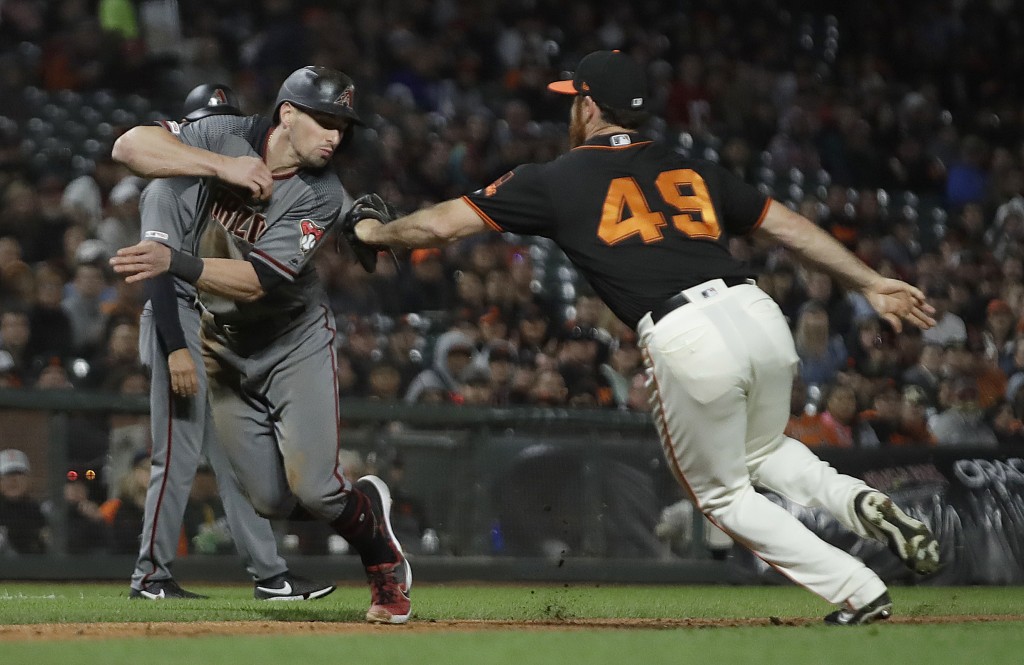 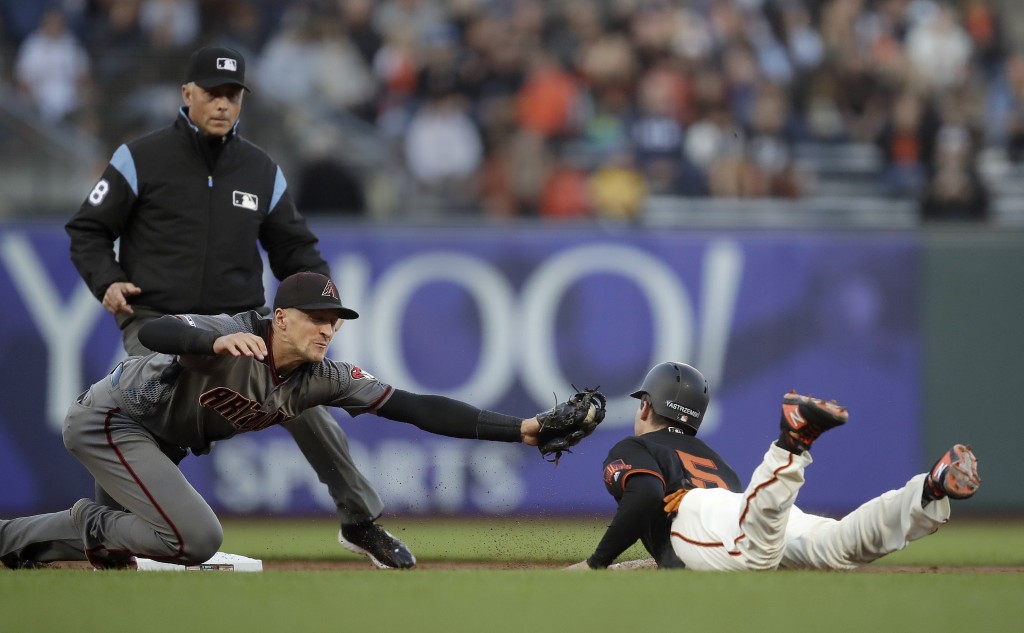 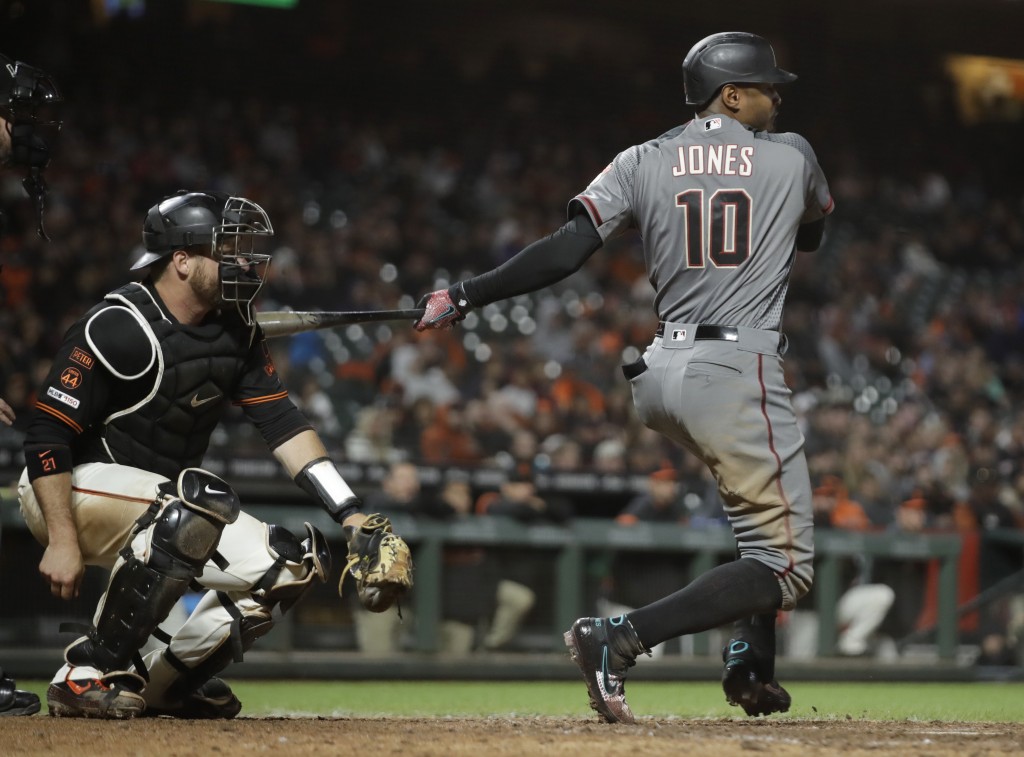 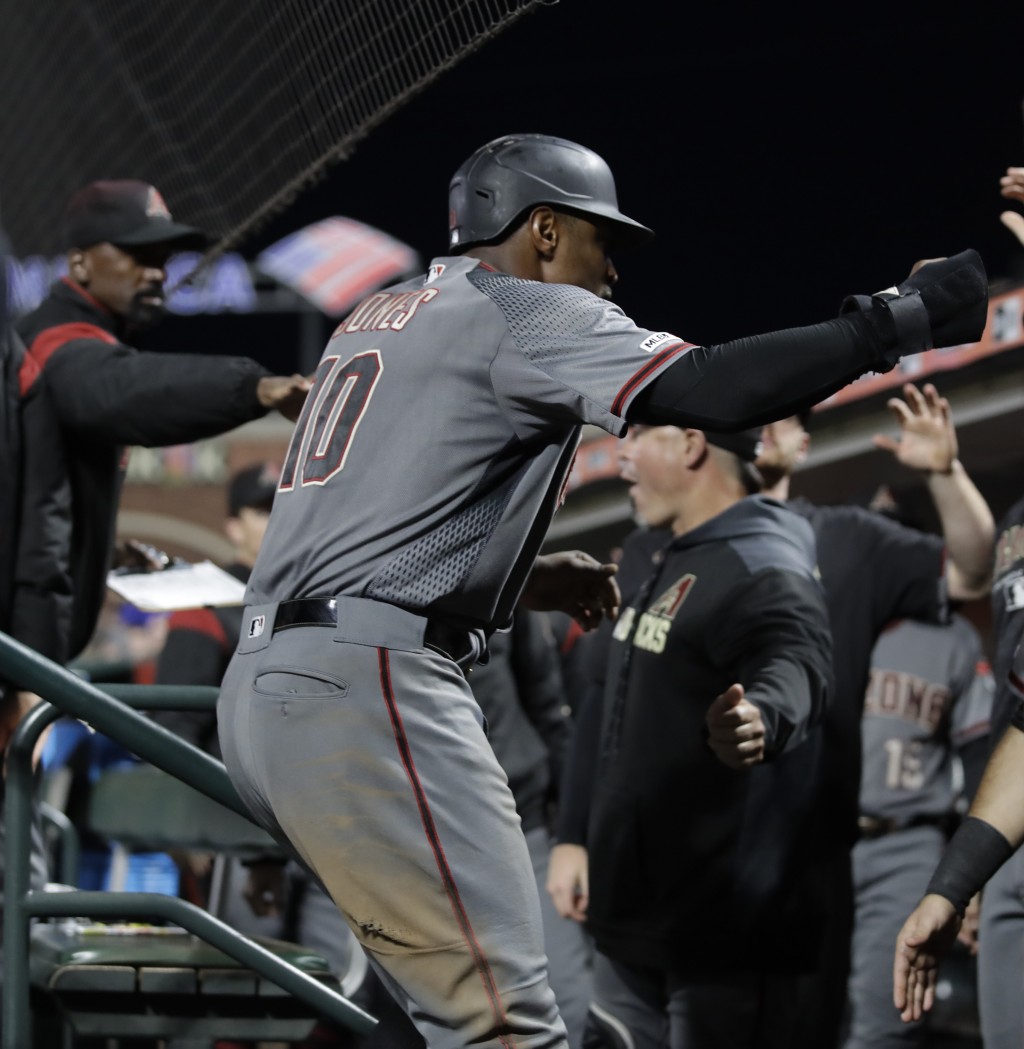 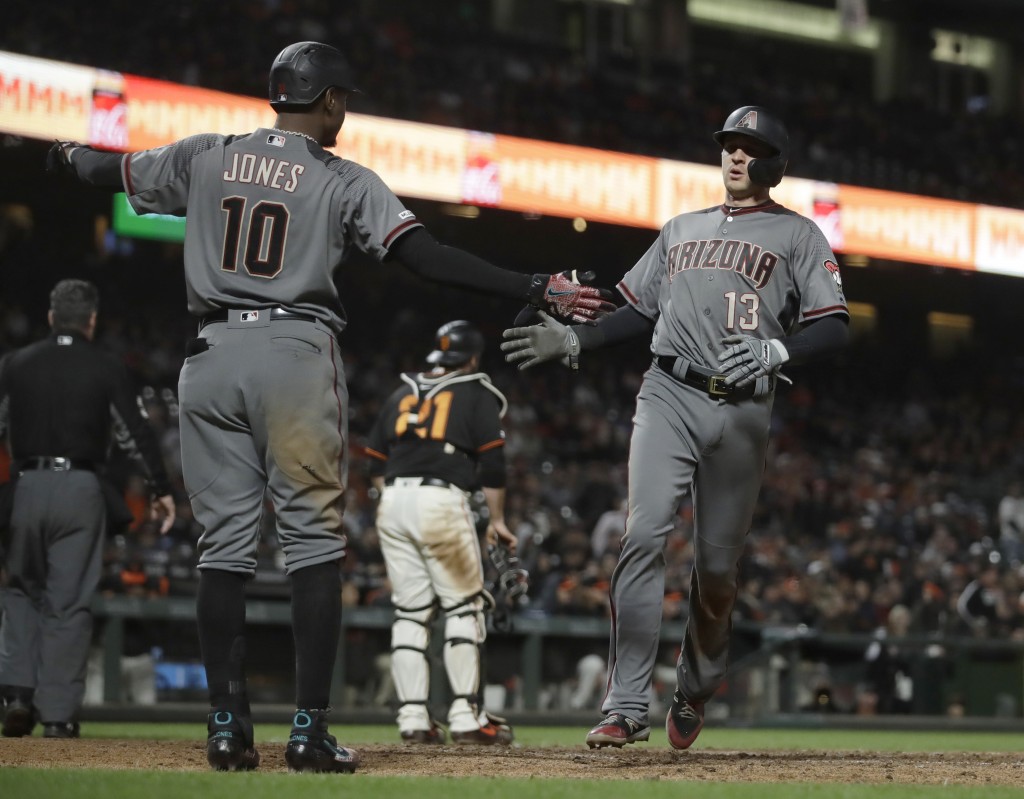 Greinke (9-3) struck out six and didn't walk a batter in another dominant outing. The right-hander allowed only one runner past first base and got the Giants to hit into a pair of double plays while extending his scoreless streak on the road to 22 1/3 innings. He gave up five hits.

Stephen Vogt hit a three-run homer off Arizona closer Greg Holland in the ninth. Holland, the third reliever used by manager Torey Lovullo in the inning, retired the next three batters for his 12th save.

Arizona stranded seven runners in the first five innings against Drew Pomeranz and had a runner tagged out trying to score in the seventh before breaking through against reliever Sam Dyson (2-1).

Jones reached on a one-out error when his fly ball glanced off the glove of center fielder Kevin Pillar. After Dyson fielded Ketel Marte's comebacker and tagged out Tom Locastro between third and home for the second out, Escobar hit a soft fly that dropped between shortstop Brandon Crawford and left fielder Alex Dickerson to score Jones.

The Diamondbacks went up 4-0 in the eighth. Christian Walker scored on an infield single by pinch-hitter Ildemaro Vargas, and another run scored when Crawford threw the ball out of play after making a diving stop on Vargas' grounder to shortstop. Jones followed with an RBI single.

HE LIKES IT HERE

Greinke improved to 13-3 against the Giants and 6-0 in eight career starts at Oracle Park.

DOING IT WITH DEFENSE

Giant right fielder Tyler Austin made a diving catch on the warning track in the ninth to rob Escobar of a fourth hit. Austin made the spectacular play after getting turned around while chasing the ball.

Diamondbacks catcher Alex Avila had two hits in his first start since coming off the injured list a day earlier. Avila has reached safely in all 18 games he has started this season.

Pomeranz matched Greinke for five innings, allowing five hits to go with seven strikeouts. The left-hander struck out three in the first after walking leadoff hitter Jones and giving up a double to Marte. Pomeranz has 18 strikeouts over his past 10 innings but is winless since June 14.

Giants: OF Steven Duggar tripled and struck out twice in three at-bats during his first rehab start with Triple-A Sacramento. Duggar (back strain) played five innings and will play seven Sunday before the team decides what to do next. . C Buster Posey was held out of the lineup and popped out as a pinch-hitter in the eighth.

Madison Bumgarner (4-7, 4.21 ERA), coming off his strongest start of the season when he had 11 strikeouts in six innings against Colorado, goes against the Diamondbacks' Robbie Ray (8-3, 3.08) in a matchup of lefties in the series finale Sunday. Bumgarner, whose name continues to circulate in trade speculation, hadn't had double-digit strikeouts since opening day 2017. Ray has four wins in six starts at Oracle Park.