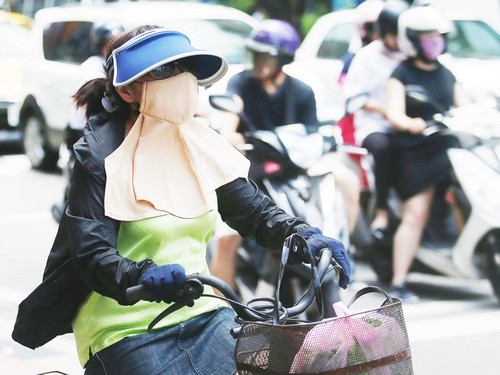 The Central Weather Bureau (CWB) on Sunday issued a high temperature warning for some parts of Taiwan, with an "orange" alert issued for Taitung County.

It also issued a "yellow" high temperature warning, which signifies temperatures of more than 36 degrees Celsius in a single day, for the Hualien section of the East Rift Valley, the Taipei basin in Taipei and New Taipei City, as well as areas close to mountains or river valleys in Taoyuan and Yunlin County and Chiayi City.

In addition, sunny or cloudy skies will prevail around Taiwan and daytime temperatures will reach 33-35 degrees in most parts of the island on Sunday, with brief showers or thundershowers forecast for the southern region, as well as Hualien and Taitung in the east, the CWB said.

Afternoon thunderstorms are likely in most mountainous areas and some flatland in Taiwan, it said, advising people wanting to take part in mountain activities to be alert to the possibility of sudden heavy downpours.

Meanwhile, a tropical depression is forming east of the Philippines, but it is unlikely to directly influence Taiwan's weather in the short term because it is moving in a northwesterly direction, according to the bureau.

Due to southwesterly winds, there are chances of thunderstorms, showers or heavy rain for Taiwan from Wednesday to Saturday, said Wu Der-rong (吳德榮), an adjunct associate professor of atmospheric sciences at National Central University.