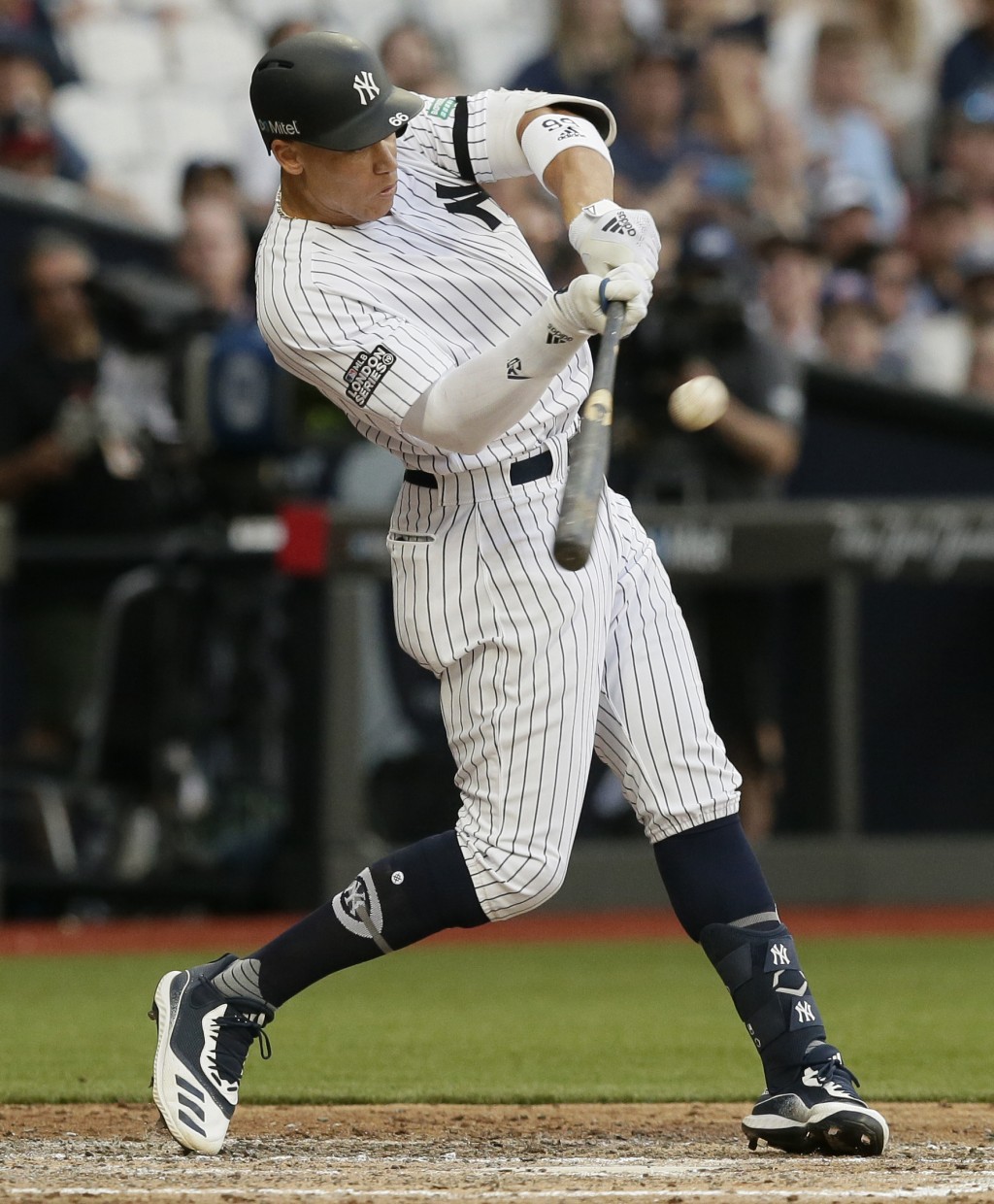 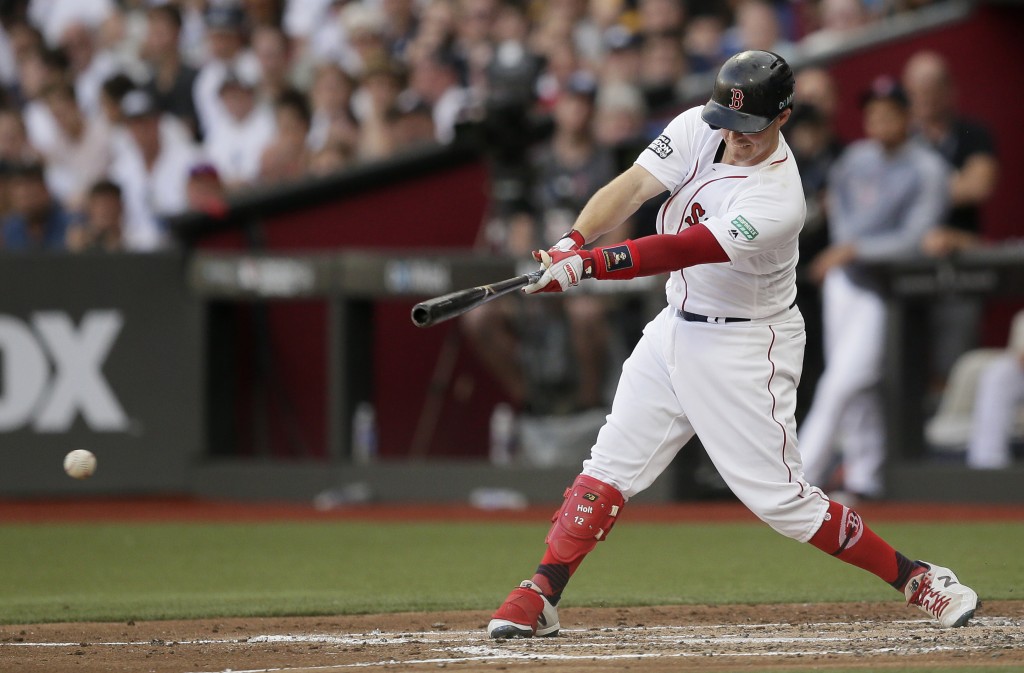 Each team scored six runs in a first inning that stretched nearly an hour.

Aaron Hicks hit the first European homer, DJ LeMahieu had four hits and five RBIs as New York opened a 17-6 lead and Luke Voit had four hits, including three doubles, before leaving with an injury in the fifth inning.

NEW YORK (AP) — Nick Markakis and Austin Riley hit consecutive solo homers to give Atlanta the lead in the eighth inning, and the Braves spoiled the New York's celebration of the 1969 World Series champion Mets.

Braves closer Luke Jackson stranded runners at second and third in the ninth for his 13th save, handing New York its seventh straight loss.

Sean Newcomb (2-0) tossed 1 1/3 scoreless innings. Jackson worked around an error by first baseman Freddie Freeman and a walk, ending it by striking out Dominic Smith on three pitches.

Anthony Santander hit the 100th home run, and 45th by an Oriole, to land on Eutaw Street since the stadium opened on April 6, 1992.

Chance Sisco also homered for Baltimore, which has outscored Cleveland 26-0 over the first two games. The Orioles will go for their first three-game sweep of the season Sunday.

Cashner (8-3) was scratched moments before the first pitch as thunderstorms passed through the area. When the start of the game was announced for 5:10 p.m. -- an hour and six minutes delay -- Cashner was renamed the starter. He finished with six strikeouts and one walk.

The Orioles earned back-to-back shutouts for the first time since June 28, 2015, also against Cleveland in a doubleheader.

Trey Mancini had three hits and drove in three runs for the Orioles. Núñez tied a career-high with four RBIs.

Vladimir Guerrero Jr. added a solo home run for the Blue Jays, who recovered after blowing a one-run lead in the top of the ninth.

Toronto gave right-hander Daniel Hudson (5-2) his third save opportunity of the season.

Marcus Stroman exited in the fifth with a cramp in his non-pitching shoulder. He allowed three runs and four hits in four-plus innings.

DETROIT (AP) — Miguel Cabrera had three hits and three RBIs as Detroit rallied twice and snapped an eight-game losing streak with a win over Washington.

Shane Greene worked the ninth and earned his 22nd save in 23 chances. The Tigers won for just the third time in 24 games at Comerica Park.

Anthony Rendon included a homer among his three hits for the Nationals, who had a four-game winning streak halted.

Tanner Rainey (1-3) took the loss after facing three batters in the seventh. He walked two and allowed a single.

McKay (1-0) didn't allow a baserunner until Danny Santana flared an opposite-field single to right with one out in the sixth. The lefty allowed one hit, a walk and struck out three in six innings. Three relievers completed a five-hitter.

Avisail Garcia homered for the Rays, who won for the fourth time in 12 games. Willy Adames and Travis d'Arnaud hit consecutive homers in the seventh.

McKay is scheduled to pitch again Friday night against the AL East-leading New York Yankees, who have a seven-game lead over the Rays.

CINCINNATI (AP) — Javier Baez hit his first grand slam of the season, and Jose Quintana went six innings for his first victory since May 5, leading Chicago over Cincinnati.

The benches and bullpens cleared after Pedro Strop hit Yasiel Puig in the thigh with a pitch in the eighth. Puig slammed his batting helmet to the ground and walked toward Strop while yelling and gesturing, but players intervened. Puig had taunted Cubs baserunner Albert Almora Jr. from right field during the series opener.

Jason Heyward connected for a solo shot off Luis Castillo (7-3), who allowed three hits and three walks in seven innings.

MIAMI (AP) — Neil Walker homered and drove in three runs as Miami rallied from a five-run deficit and beat Philadelphia for the fifth consecutive time.

The Marlins fell behind 6-1 before starting their comeback when Walker snapped an 0-for-15 skid with a two-run homer in the sixth inning. He contributed an RBI single in Miami's six-run seventh, and JT Riddle delivered a tiebreaking two-run double off Adam Morgan (2-3).

Jarlin Garcia (2-0) worked a scoreless seventh, and Sergio Romo pitched a perfect ninth for his 15th save.

Rhys Hoskins hit a two-run homer for the Phillies. Scott Kingery had two hits and two RBIs and scored a run.

Cruz hit a pair of two-run homers, connecting against Ivan Nova (3-7) in the first and launching a 469-foot shot off Jose Ruiz in the ninth. That gave him three multihomer games this season and 30 in his career. He also doubled and singled.

Pineda (5-4) gave up one run and four hits in his first win since May 21. He had eight strikeouts and walked one.

Eloy Jimenez homered. Leury Garcia had two hits and scored a run. The White Sox lost for the eighth time in 12 games.