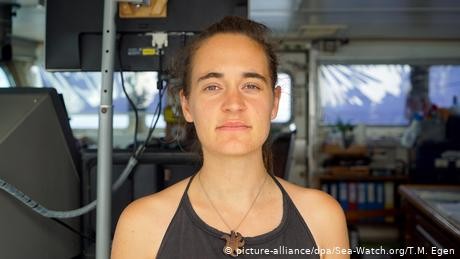 Carola Rackete knew what she was getting into when she decided to sail the Sea-Watch 3 rescue ship into Italian waters this week.

"I have decided to enter the port of Lampedusa. I know what I'm risking, but the 42 rescued people are exhausted. I'm taking them to safety now," the captain said on Wednesday.

On Saturday, she was taken into custody by Italian authorities, the ship was impounded and the 40 remaining asylum-seekers on the boat were allowed to disembark.

Rackete faces prosecution for sailing into Italian waters despite a ban from Rome. Sea-Watch 3 had been in the Mediterranean Sea with the asylum-seekers on board for over two weeks before Rackete made the decision that could land her with a fine of up to €50,000 ($56,000) as well as criminal charges under a new law prohibiting aiding and abetting illegal immigration.

According to Rackete, the desperation of those on board was enormous and what ultimately convinced her to enter the Lampedusa port. She said some on board were considering jumping off the ship. Several migrants were brought ashore in a state of "medical emergency."

Before being taken into custody, she said she was driven to take action on her own because there were no other options left. In an interview with jetzt, the online youth magazine of newspaper Süddeutsche Zeitung, she said her efforts to find a political solution with the European Union and Italian officials failed.

'I feel a moral obligation'

Who is this 31-year-old woman was willing to go into David vs. Goliath battle with the Italian government?

Rackete has captained the Sea-Watch 3 since 2018 and has worked for the organization for four years.

The skipper trained as a nautical officer and completed a Master's degree in Conservation Management at Edge Hill University in Ormskirk, England. She has also worked for the Alfred Wegener Institute for Polar and Marine Research and was active in Greenpeace.

Rackete has commanded a handful of Sea-Watch rescues, picking up 45 bodies floating in the sea from a shipwreck in one of her first missions.

The media's image of Racketeis not that of a person who wants to be seen as just a 4personal antagonist of Salvini: "His opponent here is civil society as a whole," she told the dpa news agency.

She also said she believes deeply in the "principle of human rights," and that she was responsible for the rescue. She told the Italian daily la Repubblica that those on board "could not endure it any longer. Their lives come before any political game."

Rackete's conviction to help people in need is, in her own words, also related the comparatively privileged life she has lived.

"I have white skin, I was born in a rich country, I have the right passport, I was allowed to attend three universities, and I graduated at the age of 23," she told the newspaper: "I feel a moral obligation to help those people who did have the foundations that I did."

Rackete has received praise for her commitment as well as open hostility. Salvini isn't the only one who portrays her as a criminal. Italy's Agriculture Minister Gian Marco Centinaio accused her of treating Italians like "village idiots."

The leader of the Brothers of Italy, Giorgia Meloni, called for the Sea-Watch 3 to be "sunk." But left-wing politicians in Italy regard Rackete as a "courageous woman" and "a hope for a humane world."

In Germany, Foreign Minister Heiko Maas called for a "swift clarification" of the charges against Rackete.

"Saving lives is a humanitarian duty," he said. "Sea rescues must not be outlawed."

The leader of The Left party, Katja Kipping, posted on Twitter that she was "full of respect" for Rackete and the crew. Green Party leader Robert Habeck said Rackete's arrest shows the nefariousness of the Italian government, adding in comments to the RND group of local newspapers that the "real scandal is the drownings that occur in the Mediterranean, the lack of legal escape routes and a lack of a distribution system in Europe."

The Commissioner for Refugees in the German state of Schleswig-Holstein, and former sea rescue worker, Stefan Schmidt expressed his solidarity.

"I admire Ms. Rackete because to keep your cool under these conditions and be a pillar of support for the refugees on board is anything but easy," he told the dpa news agency.