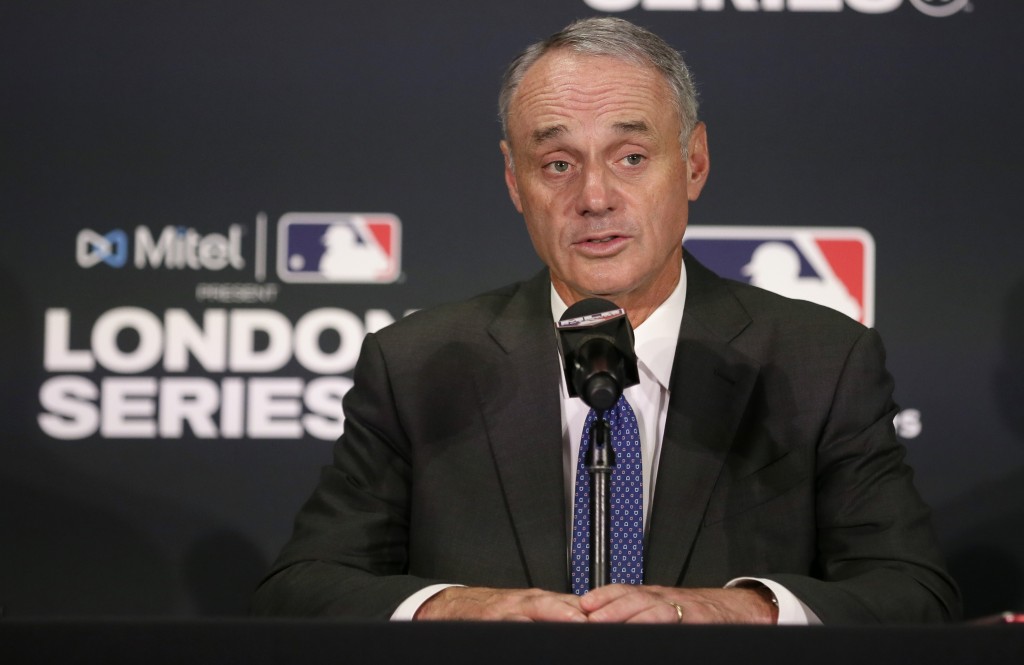 LONDON (AP) — Major League Baseball has scrapped plans to open its 2020 season in Asia and hopes to play more games in Europe.

MLB started its season in Tokyo for the fifth time in 2019, and its labor contract with the players' union called for a 2020 opener in Asia.

"We just decided it probably wasn't the right time to try to do it," Manfred said Saturday.

In addition to Tokyo and London, MLB had two series at Monterrey, Mexico.

"We have a fairly small international staff. This was a really aggressive play for us this year," Manfred said.

The New York Yankees and Boston Red Sox play MLB's first games in Europe this weekend at London's Olympic Stadium, the home of the Premier League soccer club West Ham. The Chicago Cubs and St. Louis Cardinals are to play at the same venue next June.

"I would like to have sustained play in Europe," Manfred said. "I'm glad we're coming back next year. I'd like to be back after that. But I am interested in having play in other cities in Europe."

Manfred would not identify which cities interest him.

"We're really at a very preliminary point. They key thing with any city is the facility," he said. "A lot of people will tell you they can build a ballpark. Until you get on the ground and figure whether a particular facility can be configured for baseball, it's just premature to get into other cities."

Manfred said 70% of the tickets for the Yankees-Red Sox games were sold in Britain and 30% in the U.S. Red Sox season ticket holders purchased an average of 5,831 seats per game and Yankees buyers 4,752 during the presale.

"We're trying to bring baseball to the UK, so that 70% is important to us," he said. "That 30% is our most loyal, devoted, interested fan base, and the fact that those people want to travel either from New York or Boston to see a Yankee-Red Sox game, it's not bad news for us, either."

"We have 20 people from Europe under contract with major league organizations, We'd like to see that number grow," he said, "Obviously when you have a European player, a player from a particular country making his mark in the major leagues, it drives interest among the people in that country, and that's really important for us."

The NFL has played regular-season games annually in London since 2007, and the NBA since 2011. The NHL opened its 2007-08 season at London's O2 Arena but has not returned.

"Playing in Europe presents some challenges for us that the NFL doesn't have," Manfred said. "It's a lot easier for them to play in a soccer/football stadium, virtually impossible for us. So we do have additional challenges."