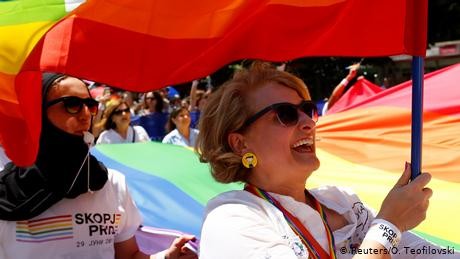 North Macedonia is one of the last Balkan countries to hold such an event in the conservative region. The nation's pro-EU government pushes to improve protection of minorities as it hopes to begin EU ascension talks.

"We are proud to celebrate, support, and participate in Skopje Pride," the US embassy said in a tweet.

Local human rights activist Koco Andonovski said that the crowd of marchers was much bigger than expected. He told the Reuters news agency that "hate speech of those who attempted to scare people away backfired."

A slew of homophobic comments and remarks had been published online ahead of the event.

While the march was completed without incident, a counter-rally also took place in Skopje on Saturday. Christian priests from various denominations, members of the Muslim community, and Roman Catholic nuns attended the event in front of a Skopje cathedral in the Eastern Orthodox-majority country.

Read more: North Macedonia and Greece: What's in a compromise?

The counter-demonstrators carried placards reading "Marriage, family, future" and "Gender and sex are biology, not ideology," as well as "Mother and father – foundation and roof." They also played drums and sang hymns, videos from the scene showed.

Citing unspecified "research and analysis" about gay marriage, local evangelical pastor Goran Iliev said it showed how "children growing up with two male of female parents are confused and cannot find their way in society, they are prone to suicide and depression, because a man with only one hand wants to have two of them."

Representative of the local Eastern Orthodox church, Ivica Todorov, said that participants in the Gay Pride March were being manipulated. He said that his own rally was "above parties, above denominations, and is showing the meaning of God-given values."

The government of North Macedonia was hoping to start the formal accession talks with the EU this month, but discord inside the bloc postponed the decision until October.