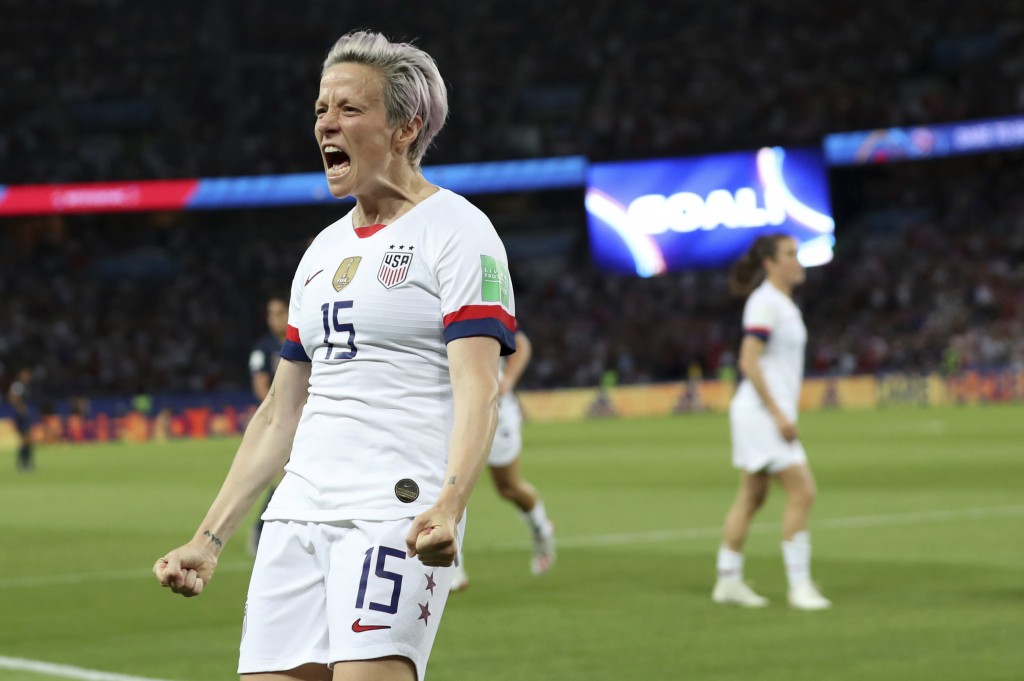 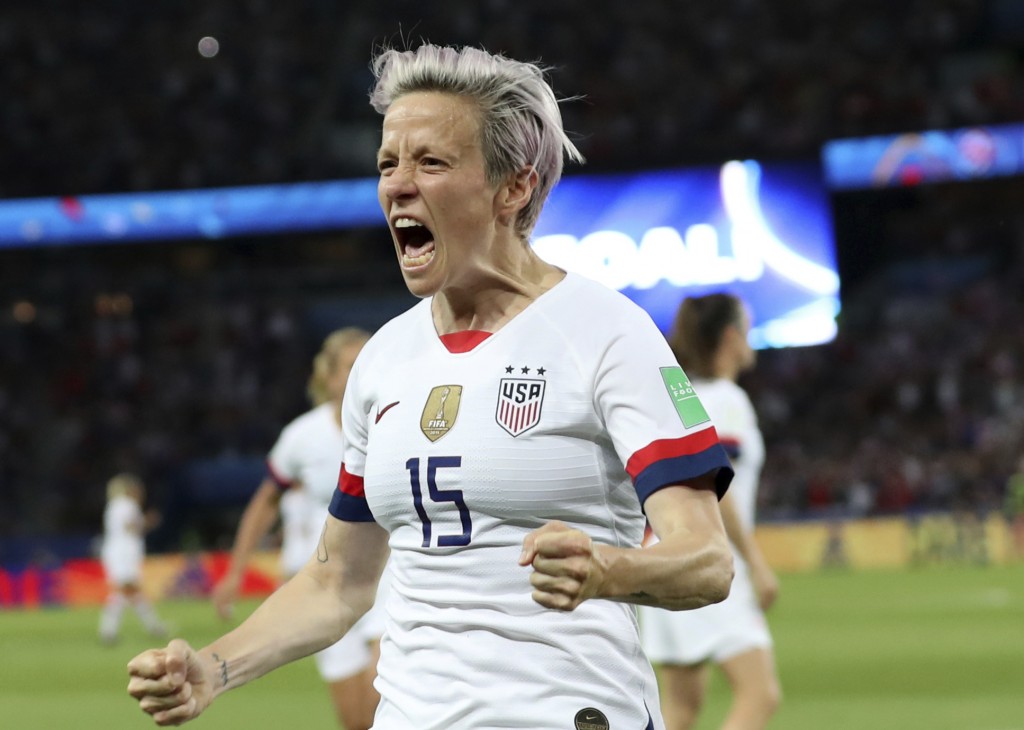 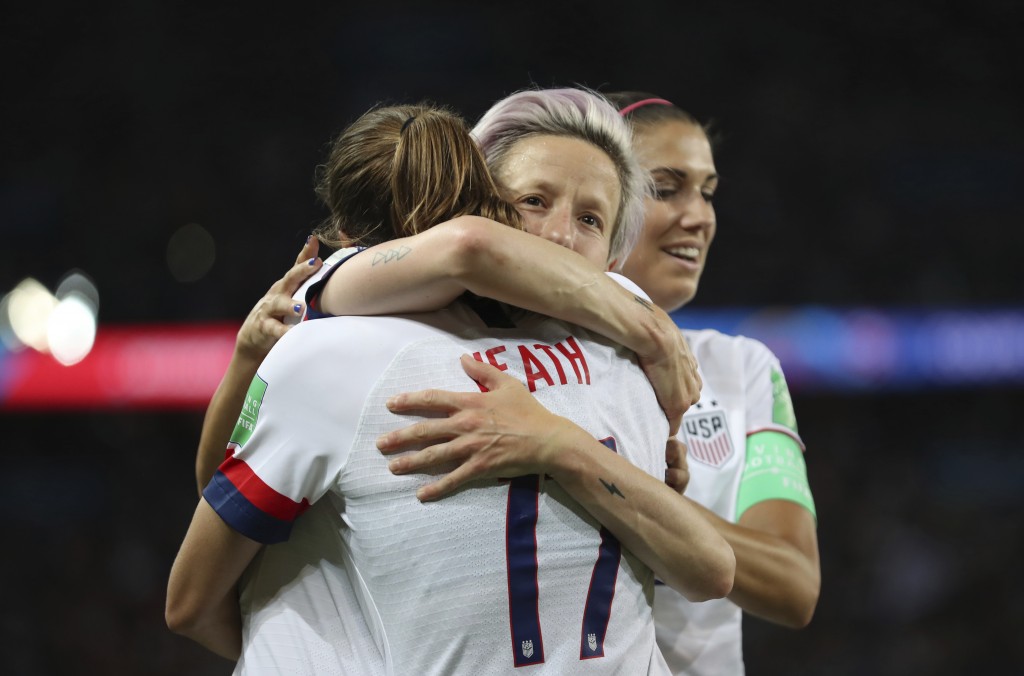 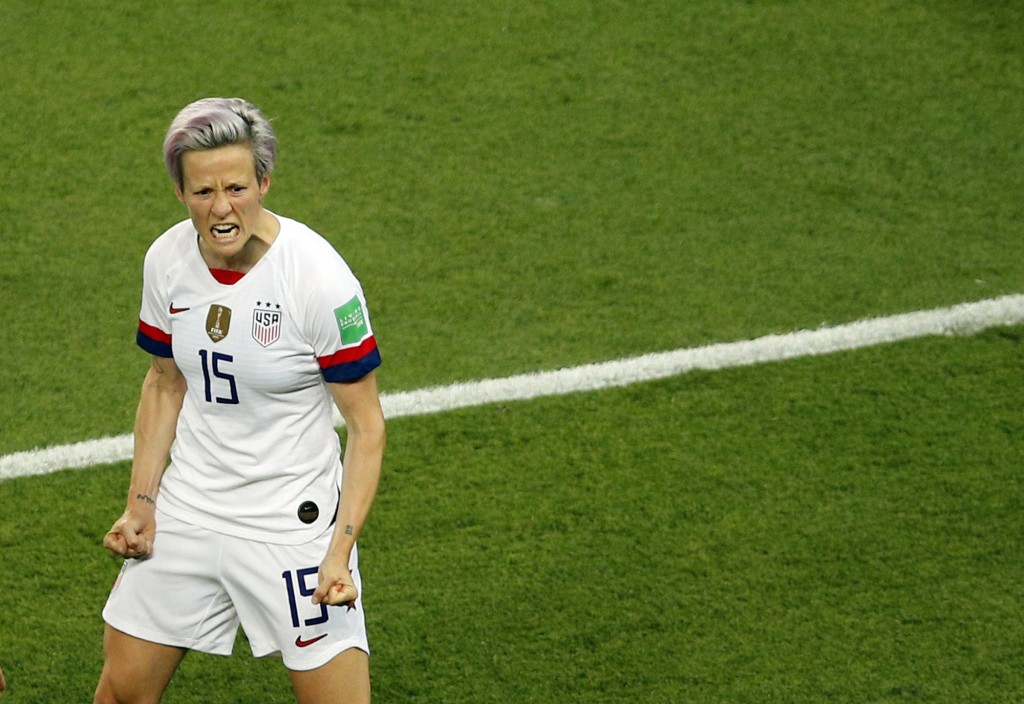 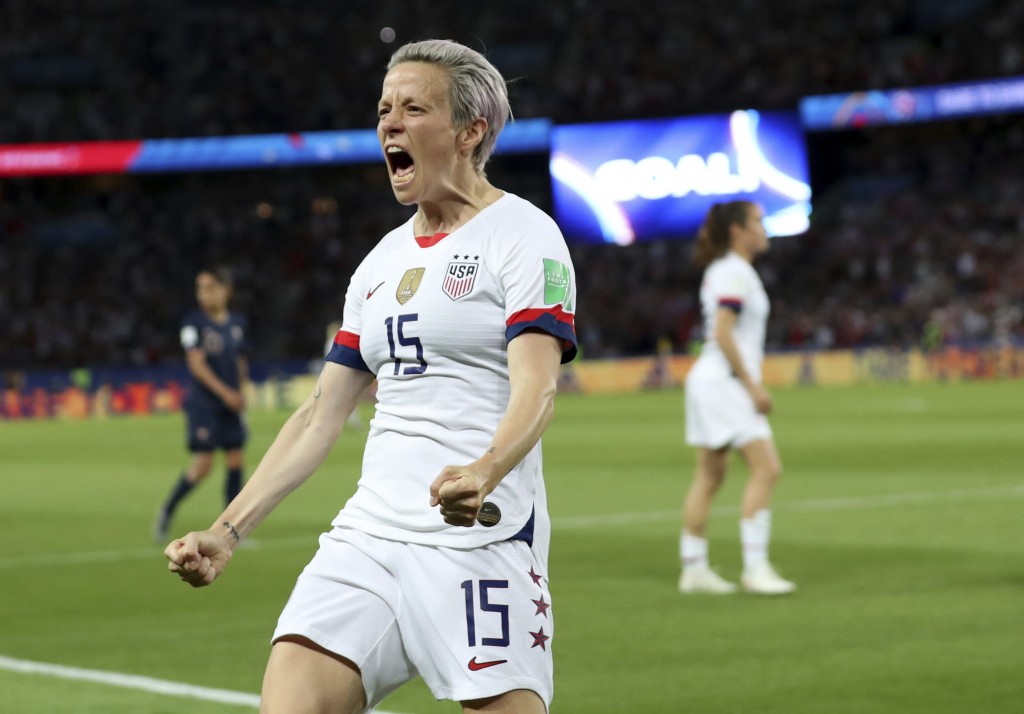 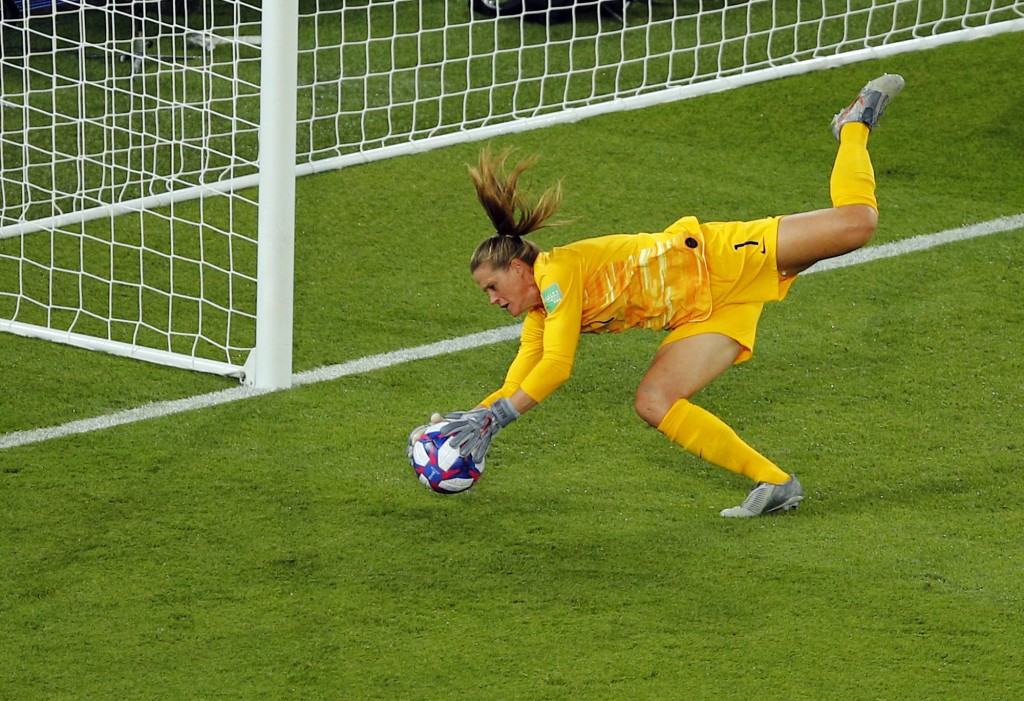 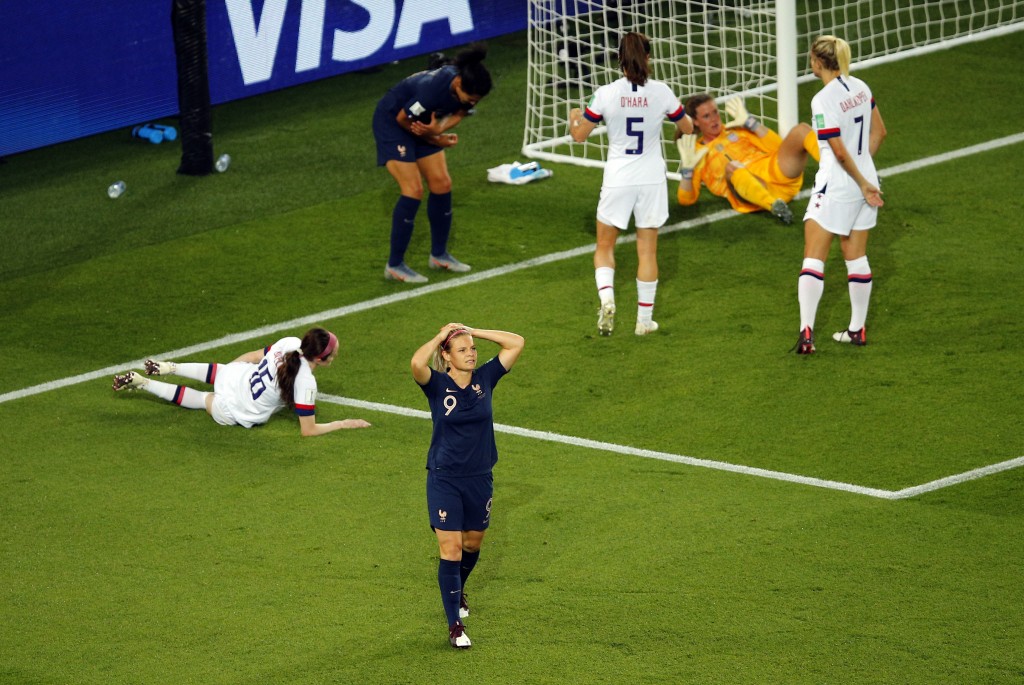 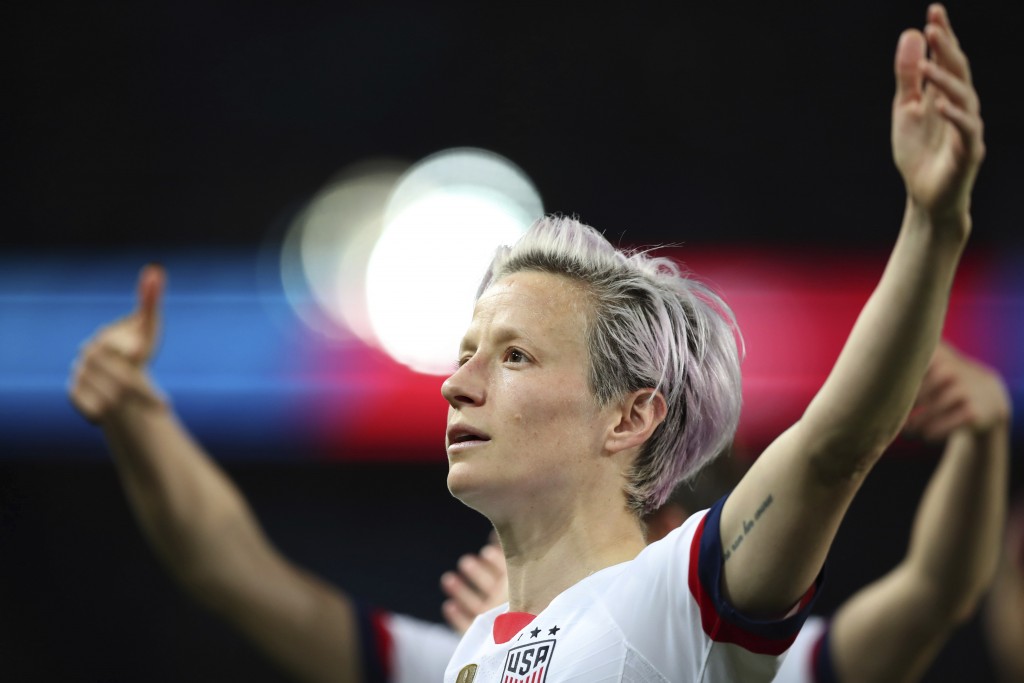 PARIS (AP) — Megan Rapinoe went from controversy to triumph, scoring twice for the United States in the much-anticipated clash with host France to send the defending champions into the semifinals of the Women's World Cup with a 2-1 victory Friday night.

France was vying to become the first nation to simultaneously hold the men's and women's World Cup trophies, but the home-field advantage and the flag-waving crowd that belted out La Marseillaise didn't faze the ever-confident U.S. team.

Rapinoe, who was called out on social media by President Donald Trump after video surfaced of her saying she wouldn't visit the White House if the United States won in France, now leads the top-ranked Americans to Lyon to face No. 3 England on Tuesday in the semifinals.

Rapinoe scored on a free kick in the fifth minute that bounced between French players and past goalkeeper Sarah Bouhaddi. After scoring, she went to the corner and raised both arms in celebration toward the U.S. fans in the sold out Parc des Princes stadium.

She raised her arms again in the 65th minute after blasting a cross from Tobin Heath that Bouhaddi dove for but couldn't stop. It was her fifth goal of the tournament.

Fourth-ranked France pulled back on Wendie Renard's header off Gaetane Thiney's free kick in the 81st. It was the 6-foot-2 defender's fourth World Cup goal.

The U.S. team is used to grabbing attention both on and off the field. Rapinoe was caught up in controversy this week when a video surfaced of her using an expletive while vowing not to visit the White House. While the interview was from January, it attracted the president's attention and he tweeted: "Megan should never disrespect our Country, the White House, or our Flag, especially since so much has been done for her & the team."

A day before the match, Rapinoe said she stood by her comments, except the coarse language. She even suggested the uproar might help her team. "I think, if anything, it just fires everybody up a little bit more," she said.

It doesn't get any easier for the United States going forward, with England looming in the semifinals after a decisive 3-0 victory over Norway on Thursday night.

Rapinoe also had a pair of goals, on a pair of penalty kicks, for a 2-1 victory over Spain to open the knockout stage. Until Jennifer Hermoso scored for Spain, the United States had not conceded a goal in eight straight competitive matches dating to the 2016 Olympics, outscoring opponents 44-0.

Goalkeeper Alyssa Naeher was stellar in the second half against France, fighting off a flurry of attempts until Renard's header.

Les Bleues also reached the quarterfinals at the 2015 World Cup in Canada but fell to Germany on penalties after a 1-1 draw. The team's best finish at the tournament was fourth in 2011 after losing 2-1 in the third-place match to Sweden.

France finished atop its group this year and then overcame a determined challenge from Brazil in extra time on Sunday night to reach the quarterfinals.

The victory over Les Bleues was Jill Ellis' 125th match as the U.S. coach, surpassing April Heinrichs for the career record.

The United States already has three World Cup trophies, most of any nation. The Americans emphatically beat Japan 5-2 to win in Canada four years ago.