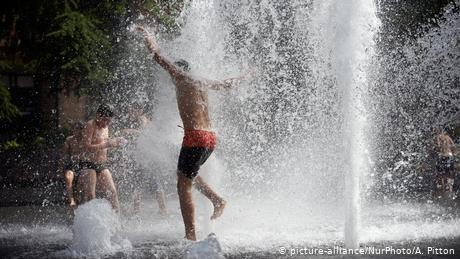 France recorded its all-time highest temperature on Friday amid a blistering heatwave that has been baking most of Europe all week.

The temperature rose to 45.1 degrees Celsius (113 degrees Fahrenheit) in the southern village of Villevieille, state weather forecaster Meteo-France said in a statement.

It was the second time in one day that France's heat record was broken, coming shortly after a temperature of 44.3 degrees Celsius was recorded in the town of Carpentras.

Prior to Friday, the previous record was 44.1 degrees Celsius, which was also logged in southern France during a heatwave in August 2003 that killed thousands of people.

Meteo France warned that the current record could still be topped in the current heatwave.

Thousands of schools have closed across France, as they could not guarantee safe conditions for students.

The heat has caused dangerous conditions all across Europe and has been blamed for at least two deaths in Spain.

According to police, a 93-year-old man near the city of Valladolid collapsed in the street and died due to the heat.

Another 17-year-old died of heatstroke near the southern city of Cordoba shortly after jumping into a pool to cool off after working all day in the fields, regional health authorities said.

A major wildfire that broke out in northeastern Spain continued to burn out of control for a third straight day.

Hundreds of firefighters are working to contain the blaze, which is believed to have been started in a pile of chicken dung. The fire in the Catalan province of Tarragona has also destroyed an estimated 6,500 hectares (16,061 acres) of forest so far.

Temperatures to last through weekend

In Berlin, police have been taking out water cannons — which are typically used against rioters — and using them on trees in the German capital in an effort to cool them off.

Germany's national weather service on Friday said temperatures in June were "4.4 degrees higher than the internationally recognized reference period of 1961 to 1990."

At least 16 cities in Italy have also been put under alert, with civil security services reportedly distributing water to tourists visiting historical sites in Rome.

Forecasters say the heat will continue through the weekend and into early next week.