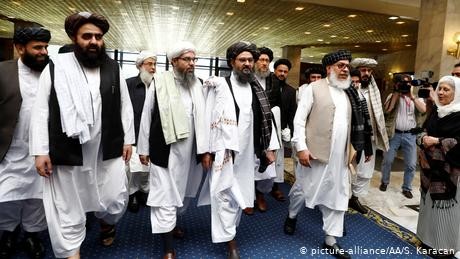 The US is hopeful that a peace agreement with the Afghan Taliban could be reached in less than three months from now. But as Washington and the Taliban are set to hold a fresh round of negotiations in Qatar's capital Doha on Saturday, security experts are not very optimistic about the talks producing a tangible outcome.

"I hope we have a peace deal [with the Taliban] before September 1, 2019. That is certainly our mission," US Secretary of State Mike Pompeo, who held talks with Afghan officials in Kabul on Tuesday, told reporters.

The task to broker a deal with Islamist militants, who ruled Afghanistan from 1996 to 2001, is led by Zalmay Khalilzad, an Afghan-born US diplomat. Since October last year, Khalilzad has held six rounds of talks with Taliban leaders in the group's Qatar office. Several Western officials have held separate meetings with the Taliban to convince them to end the 18-year-long war in Afghanistan. All these efforts have yielded no result.

So far, the US and Taliban negotiators have only agreed on one thing: the withdrawal of foreign troops from Afghanistan. But what would be the political set up in the country after the troops' departure? What would be the role of the incumbent Afghan government in the post-withdrawal set up? There hasn't been any progress on such critical issues.

"We can expect progress if we define progress as movement toward a troop withdrawal deal," Michael Kugelman, a South Asia expert at the Washington-based Woodrow Wilson International Center for Scholars, told DW. Such a deal, Kugelman added, could only be counted as a win for the Taliban, not for the US or the Afghan government.

"That's certainly progress for the Taliban, but not for the US, which has repeatedly said that there can be no agreement until both sides agree on all the issues on the table," he underlined.

The Taliban, whose regime was ousted by the US in a 2001 invasion of Afghanistan, have made it clear that they won't include the government of Afghan President Ashraf Ghani in peace talks, denouncing the administration in Kabul as a "foreign puppet."

The Islamist group also insists that the next phase of talks between Afghan groups could only happen after an agreement over the withdrawal of all foreign troops.

Some Taliban commanders claim that Washington has partially agreed to pull out its troops from Afghanistan, in return for an assurance that Afghanistan will not be used as a terrorist safe haven against the West.

"Once the timetable for foreign troop withdrawal is announced, talks will automatically enter the next stage," said Sohail Shaheen, a spokesman for the Taliban's political office in Doha.

"We don't need to wait for the completion of the withdrawal; both withdrawal and talks can move forward simultaneously," he added.

But the Taliban may have a different definition of the "next stage of talks" than what Kabul and some of its international allies have in mind. It is still not clear how the Taliban will act once a withdrawal date is agreed upon.

"We don't know if the Taliban will then agree to talk to the Afghan government or demand an interim government that they could become a part of," Wahid Muzhda, a Kabul-based security analyst, told DW.

But the withdrawal of foreign troops is likely to strengthen the Taliban's position. The group already controls over 50% of Afghan territory, according to some studies.

"The Taliban would be in an even stronger position and will not see the need to engage with the Afghan government," said Muzhda.

In recent months, all major stakeholders in Afghanistan have held talks with the Taliban. Germany, Russia, China, EU officials, Iran and Pakistan have all reached out to the group.

Markus Potzel, Berlin's special representative to Afghanistan and Pakistan, met with Taliban members in Doha at least two times in May.

"The chance for a process toward a more peaceful Afghanistan should not be missed. If the friends of Afghanistan — Germany being one of them — together can help in this effort, then we should do it," Potzel said last month.

While all countries that have met with the Taliban in the past few months want to end the protracted Afghan war, their uncoordinated efforts have not proven to be very productive.

President Ghani reportedly raised this issue with Pompeo on Tuesday. "The president thanked the US government for the Afghan peace efforts and added that it was best if allies [of Afghanistan] and [its] international partners avoided individual and scattered efforts," Shah Hussian Martazawi, a spokesman for President Ghani, wrote on Facebook.

Ghani is particularly concerned about the Moscow peace process in which Taliban representatives met with his political opponents on two occasions, excluding officials from the Afghan government.

"The Moscow meetings are a blessing and a curse," South Asia expert Kugelman said. "On the one hand, they represent the beginnings of a much-needed intra-Afghan dialogue. On the other hand, they exclude the Afghan government, which sharpens the internal divisions within Afghanistan's political environment," he elaborated.

All these parallel efforts have failed to convince the Taliban to agree on a ceasefire or to engage in talks with the Afghan government.

"Despite all these meetings, nobody knows how and what the Taliban are planning," Sadiq Patman, a former adviser to President Ghani, told DW.