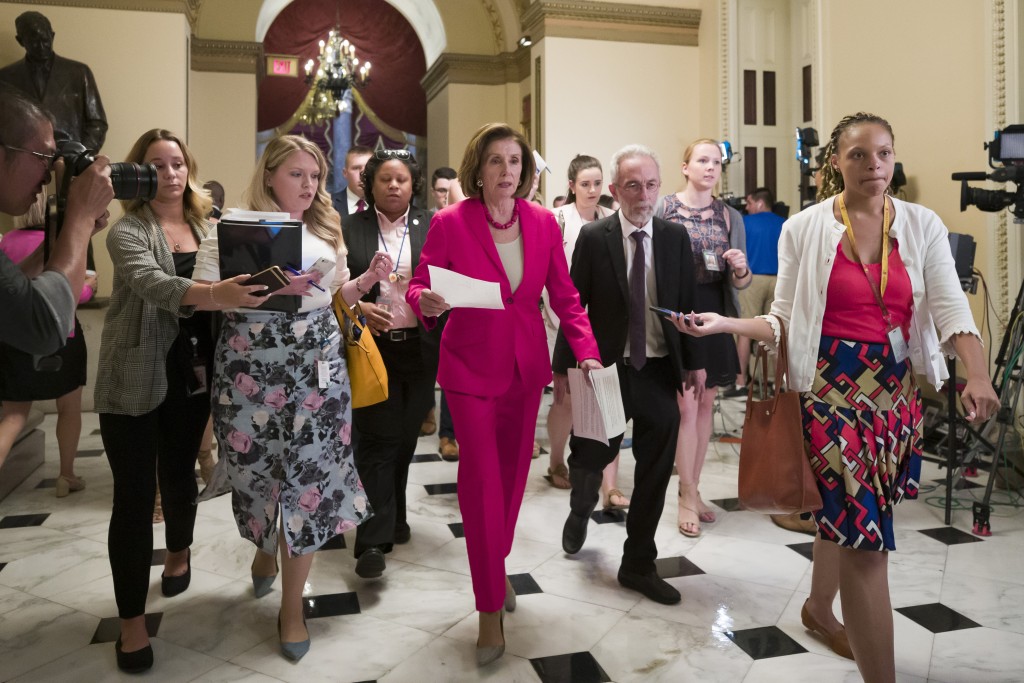 WASHINGTON (AP) — Hardly anyone in Congress opposes improving the horrific conditions awaiting many migrants caught spilling across the southwest border. Yet for Democrats, distrust of President Donald Trump runs so deep that a uniformly popular humanitarian aid bill prompted the party's deepest and most bitter divisions since they took House control in January.

The bill dealt a blow to House Speaker Nancy Pelosi, D-Calif., who had to accept weaker legislation than she preferred. But it also produced schisms that radiated far broader shock waves.

It pitted House and Senate Democrats against each other and highlighted discord between the House's sizable progressive and centrist factions. It showed that Pelosi faces a challenging balancing act that goes well beyond coping with a handful of vocal, liberal freshmen like Rep. Alexandria Ocasio-Cortez, D-N.Y.

The fight suggests that similar power plays between the liberal and moderate blocs could complicate Democrats' efforts to move future bills on marquee issues like health care, climate change and divvying up federal dollars among defense and domestic programs. And it echoed problems faced by recent Republican speakers when they controlled the House and saw priorities derailed by members of the GOP's hard-right, often unyielding House Freedom Caucus.

"It is not good for our unity," said Rep. Pramila Jayapal, D-Wash., a liberal leader, adding, "This is a very rough patch."

While both chambers of Congress approved the package by lopsided margins, Senate Democrats led by Minority Leader Chuck Schumer backed it overwhelmingly, with just six Democrats voting "no." They congratulated themselves for cutting the best deal they could in the Republican-controlled chamber, where the rules virtually force the two parties to compromise if legislation is to pass.

"You've got a 30-1 vote," said Sen. Patrick Leahy, D-Vt., Senate Democrats' chief negotiator on the measure, citing the Appropriations Committee's overwhelming approval, which presaged the Senate's 84-8 final passage. "Around here these days you couldn't get 30-1 that the sun rises in the East."

Yet in the House's 305-102 vote sending the measure to Trump on Thursday, Pelosi's Democrats split 129-95 for the measure. Many who backed it did so grudgingly, even though much of the $4.6 billion was aimed at children who have been stockaded in overcrowded, squalid facilities. House Democrats accused their Senate counterparts of killing their leverage to strengthen the measure by backing the legislation so strongly, and even the usually measured Pelosi couldn't resist a dig.

"We will not engage in the same disrespectful behavior that the Senate did in ignoring the House priorities," she said. "In order to get resources to the children fastest, we will reluctantly put the Senate bill on the floor."

House Democrats were riven internally, with moderates saying liberals were living in a dream world if they thought they could force Republicans to alter the bill.

"The bill was very good. You know why? Because it's actually going to happen" and get signed into law, said moderate Rep. Jeff Van Drew, D-N.J.

Countered Rep. Raul Grijalva, D-Ariz., a top liberal, "Our efforts to try to make this bill much more humane than it is now were basically thrown under the bus" by moderate Democrats.

Progressives wanted to buttress the measure with provisions preventing Trump from transferring money to toughening border security or buying more beds so authorities could detain more migrants. They also sought language strengthening requirements for how migrants are cared for and making it easier for members of Congress to make snap visits to holding facilities.

But swing district moderates, worried they'd be accused of weakening immigration law enforcement and needlessly delaying the aid, warned early Thursday that they would oppose adding such provisions to the bill.

It was already clear that any House changes would die in the Senate. Citing the overpowering support his chamber's measure had received from both parties, Senate Majority Leader Mitch McConnell, R-Ky., called it "the only game in town." Holding almost no cards, Pelosi — who backed the changes that liberals wanted — abruptly brought the Senate-approved bill to the House floor, without the revisions, infuriating progressives.

"They should have been arguing for provisions that actually would hold a cruel administration accountable, and they didn't," said Jayapal, expressing her rage at Senate Democrats.

Spotlighting Democrats' internal turmoil, 24 members of the Congressional Hispanic Caucus voted against the measure and only eight supported it. The group, for whom immigration and improving the treatment of migrants are top priorities, called the bill "a betrayal of our American values" in a statement.

"We have a president who is very untrustworthy, and giving him a blank check is very frightening for me," said Rep. Veronica Escobar, D-Texas, who opposed the measure. In an indication that the fight could have personal repercussions among Democrats, Escobar said of moderates, "I wish even one of them had spoken to me."

Democrats might have shaped the bill more to their liking if they'd attached it to a disaster aid bill approved several weeks ago that Trump and congressional Republicans badly wanted to pass. House Democrats pulled it off that measure after liberals complained that it lacked money for Puerto Rico and stricter care standards for migrants, a move that may have robbed them of bargaining power.

"Very few people here have actually had to govern, and they don't know what that looks like yet," said veteran Rep. John Yarmuth, D-Ky., noting that only a fraction of House Democrats served in the majority until this year.