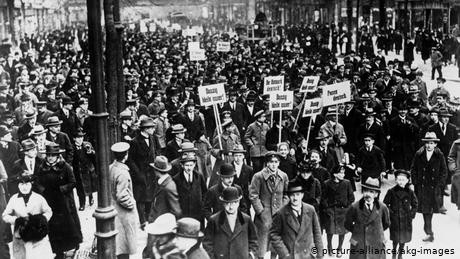 Philipp Scheidemann, the Social Democrat who on November 9, 1918, had declared Germany a republic, found it hard to stomach the Treaty of Versailles. The first chancellor had hoped that mitigating factors would lead to an acceptable post-World War I peace treaty at the 1919 Paris Peace Conference. But his hopes were dashed. Outraged, he asked: "Whose hand would not wither that shackles itself in this way?" Indeed, his anger reflected what many in Germany felt at the time.

The Treaty of Versailles placed a heavy burden on Germany's burgeoning democracy. It forced the country to pay billions in reparations; give up its colonies in Africa, Asia and the Pacific region; and to cede 13% of its territory to other nations. Among other things, Alsace-Lorraine became French and most of West Prussia became Polish. The victorious powers — led by the United States, Britain, France and Italy — declared Germany and its allies to be solely responsible for the outbreak of World War I. They accused the Germans of having forced them into war, thus holding them accountable for "all losses and damages" incurred.

The Treaty of Versailles was signed on June 28, 1919 — but not by Chancellor Philipp Scheidemann, who resigned rather than lend his signature to the accord. Germany only signed the treaty after the Allies threatened to invade the country. The Rhineland, incidentally, had remained occupied since the armistice of November 11, 1918.

In Germany at the time, many dismissed the treaty as a "dictated peace" due to its harsh terms. Eckart Conze, a historian at Marburg University, told DW he believes this outrage was "undoubtedly" justified. After all, the Germans never had any say in the negotiations.

Yet Conze also points out that despite the harsh terms, Germany remained a strong nation-state in the heart of Europe. Moreover, he adds, Germany was able to reduce its as-yet unspecified reparation payments to reflect its limited economic productivity at the time. In 1921, the Allies had demanded 132 billion German mark in reparations. Yet over the years, Germany was able to renegotiate this war debt to just 36 billion. And Conze says that "because of the global financial crisis, Germany was even exempted from payments in 1932."

Yet despite such leniency, the Weimar Republic — named after the city where the new constitution was drawn up — was by this time teetering on the brink of collapse. From day one, German monarchists and National Socialists had done their utmost to bring down the inchoate democracy. They were convinced that the republic's democratic decision-makers alone were to blame for the Treaty of Versailles, rather than Imperial Germany, which had fought and ultimately lost World War I. Conze says this "perfidious claim resonated with the German public, which almost entirely rejected the treaty."

The terms of the treaty did not plot an automatic course to the Nazi dictatorship in 1933, Conze says. People in 1919 were open to the future. But the historian says the enemies of German democracy on the far right capitalized on the highly unpopular treaty "to fight and ultimately abolish German democracy."

During this era, political assassinations were not uncommon. In 1922, for instance, German Foreign Minister Walter Rathenau of the liberal German Democratic Party (DDP) was murdered by right-wing extremists in Berlin. They despised him for supposedly doing the Allies' bidding.

Ultimately, the Treaty of Versailles failed to create a lasting peace on the European continent. Adolf Hitler's rise to power once again transformed Germany into a belligerent nation. Flouting the ban on rearmament, the National Socialists built up their army and forged alliances with other fascist countries like Italy and Spain. British Prime Minister Neville Chamberlain's appeasement politics failed to stop Hitler's increasing assertiveness, and the United States kept out of European politics. The League of Nations, which had been established at the Paris Peace Conference, also lacked the clout to prevent the outbreak of World War II.

Eckart Conze's study, titled "The Great Illusion. Versailles 1919 and the New Global Order," looks into the reasons for the collapse of the Weimar Republic. He says that fortunately, the victors of World War II were at pains not to repeat the mistakes that were made after the Great War. He says that is why Nazi Germany was forced to "surrender unconditionally, and why the Allies took political control of the country." Above all, the historian says, the victors aimed to establish strong international structures and institutions to prevent the resurgence of aggressive nationalist and unilateralist forces.

These efforts, Conze says, led to the emergence of "multilateral organizations and a rule-based international system" in the Western world with the US at the helm. The fall of the Berlin Wall in 1989 and the end of the Cold War seemed to underscore the global appeal and triumph of this order.

But today, Conze warns, "the world faces greater challenges than ever before." He says a new brand of nationalism and unilateralism, spurred on by populism and authoritarianism, is threatening the stability of the global order.

Which is why French President Emmanuel Macron has warned that the "old demons" of the inter-war period have been reawakened.