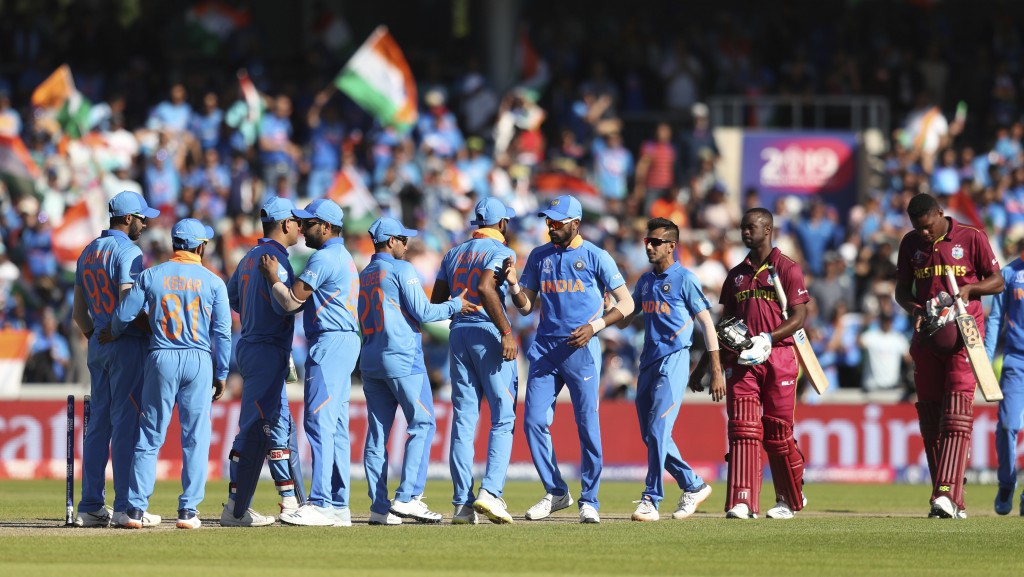 MANCHESTER, England (AP) — West Indies thrashed Pakistan in its opening game at the Cricket World Cup. Since that high, it's been a long way down.

While Pakistan has staged an impressive recovery and could even still reach the semifinals, West Indies saw its chances end Thursday after a fifth straight loss, this time by a massive 125 runs against India. Chasing India's sub-par 268-7, West Indies were bowled out for 143 as another poor batting display cost the team.

This merry bunch of cricketers started the World Cup in dominating fashion, beating Pakistan by seven wickets at Nottingham.

But that was 28 days ago, followed by losses to Australia, England, Bangladesh, New Zealand and now India, with a washout against South Africa. Struggling at eighth in the 10-team table with three points, everything has gone wrong for the two-time champions.

"After the first innings against Pakistan, the guys were confident going forward into the World Cup. I think a couple of close games (hurt us)," pacer Kemar Roach said. "It is tough because you want to get over the line obviously and get some confidence (back). But it didn't work out for us."

It has been an odd World Cup for the West Indies.

Coming into the tournament, few gave the team a serious chance despite often being a Twenty20 force. Then the West Indies demolished Pakistan by seven wickets, winning with almost 37 overs to spare.

But it proved the high point.

In a tournament where 300 is often considered par for the course, West Indies had one 300-plus score in seven matches — an impressive 321-3 against Bangladesh at Taunton — before Bangladesh won with 8 ½ overs to spare.

Overall, it has been a batting failure. West Indies doesn't have a single batsman in the top 20 run list. Chris Gayle, with 200 runs from six innings, is their top scorer.

Gayle had earlier announced retirement from international cricket and labeled this his last appearance for the West Indies. On Wednesday, he made a U-turn, announcing his availability for the forthcoming India tour of West Indies. It was surprising news even for skipper Jason Holder, who outlined that he needed to "have a serious conversation with Gayle about his future plans for the betterment of West Indies cricket."

Until recently, Gayle was an effective freelancer, playing for various T20 leagues across the world, and only available for select international tournaments. That may not have helped to inspire the team.

The likes of Shai Hope (192 runs in six innings), Nicholas Pooran (191) and Shimron Hetmyer (189) have failed to live up to their potential in England. They scored 5, 28 and 18 against India, respectively, after Gayle fell for six runs off 19 balls.

It had happened before in their games, especially against New Zealand when the West Indies came remarkably close to victory thanks to Carlos Brathwaite's superb maiden ODI hundred. A win may have changed everything but West Indies will never know now.

West Indies' batting has shown a lack of temperament and ability on the innings-building front.

"Our batting has let us down. This is our weakest format," captain Jason Holder said. "We need to improve ... bowling has been a bright spark for us in this tournament."

The ball has swung about at times and West Indies' biggest joy amid the gloom has been their pace attack. Sheldon Cottrell, with 11 wickets in seven games, is a surprise presence in the top 10 wicket-takers.

The modern-day ODI format, however, is all about runs and West Indies, the once-feared 1975 and '79 champions, fell far short.

"We are out now, but we are still learning," Roach said. "A couple of guys on this team have a great future ahead of them. Once they get some good guidance, they will do well for the West Indies. There are a couple other batsmen back home (in domestic cricket). Hopefully in the future we will see those guys filter into the West Indies' team."