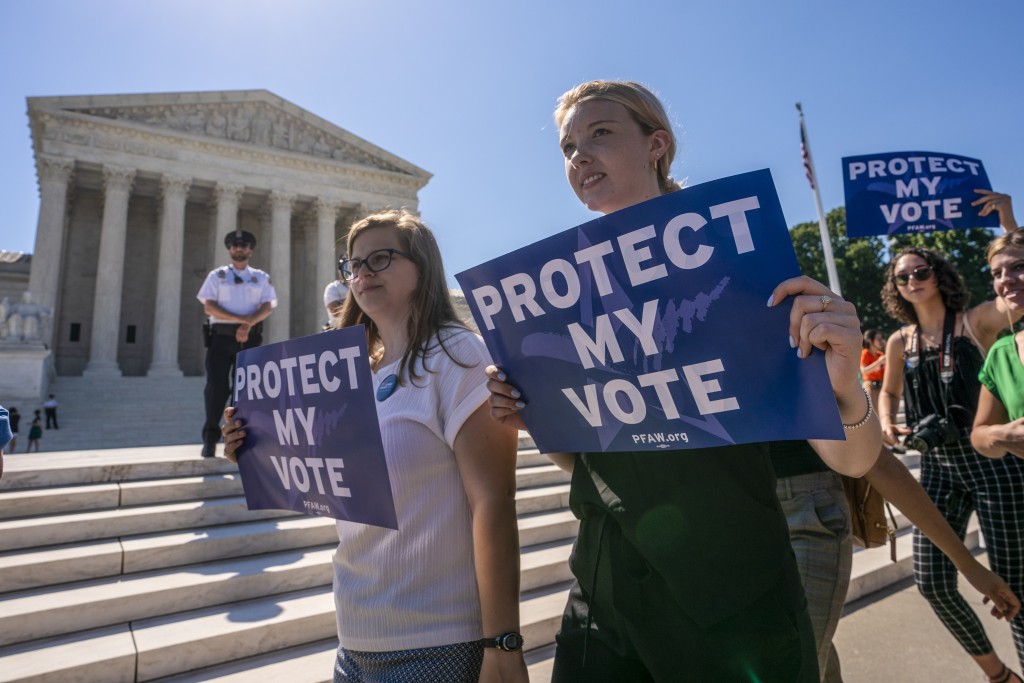 The 5-4 ruling could clear the way for partisan state legislatures to redraw more districts after the 2020 census. Democratic White House candidates were united in their outrage over the decision, but some liberal activists pressed them to go further, calling for changes to the court's structure that they say would help eliminate partisan decisions.

"This is part of a pattern where the democratic process itself is being monkeyed with," said Brian Fallon, a former aide to Hillary Clinton's 2016 presidential campaign who now leads Demand Justice, a progressive group created to counter long-running conservative advocacy on the judiciary. "So just putting your faith in winning the next election is not a sufficient response. There needs to be a plan."

Once a fringe issue, Supreme Court reform has gained traction among progressives who believe Republicans have subverted the system to install nominees to chip away at civil rights and democratic reforms. But the issue remains divisive for Democrats, even as President Donald Trump has reshaped the federal bench with more than 100 successfully confirmed judicial picks, and most of the 2020 candidates have stopped short of fully embracing measures such as increasing the size of the court or imposing term limits on the justices.

The most prominent candidate to stake out a firm agenda for overhauling the Supreme Court is Pete Buttigieg, mayor of South Bend, Indiana. Buttigieg has floated an expansion of the court from nine to 15 justices, an idea that hasn't gained serious momentum since former President Franklin D. Roosevelt's failed attempt to add justices in 1937. He also has promised to empanel a "bipartisan reform commission for the purpose of recommending structural improvements to protect the Supreme Court from further politicization."

On the other side of the debate is former Vice President Joe Biden, who's consistently led early polls of the 2020 primary. Biden is not entertaining the idea of the sort of major Supreme Court overhaul that the Indiana mayor and some fellow Democratic presidential rivals are discussing, according to a person close to the campaign who spoke on condition of anonymity to address Biden's views on the topic. The former Senate Judiciary Committee chairman is set to debate Buttigieg and eight other Democratic rivals on Thursday night.

Other Democratic White House contenders have said they are open to discussing potential structural shifts to the high court. Massachusetts Sen. Elizabeth Warren, California Sen. Kamala Harris, New York Sen. Kirsten Gillibrand and New Jersey Sen. Cory Booker all have indicated that they would consider a Supreme Court overhaul if they win the presidency. Montana Gov. Steve Bullock told reporters during a New Hampshire campaign stop on Thursday that concerns about politicization of the Supreme Court are "one of the reasons why we do have to try to figure out ways to do court reform."

Ezra Levin, co-founder of the liberal group Indivisible, said he's encouraged that several candidates have expressed openness to court reforms, but he added, "It's time to put pen to paper." Dan Pfeiffer, a White House communications director under President Barack Obama who now hosts the liberal podcast Pod Save America, tweeted after the gerrymandering decision: "Today would be a good day for some Democrats to come out with their court reform proposals."

Vermont Sen. Bernie Sanders has said he would not support expanding the high court but might support breaking its justices' lifetime hold on their seats by rotating judges on the bench, effectively limiting their terms. Sanders ignored reporters' questions about the gerrymandering decision on Thursday in Miami, where he is set to take the stage for the second of the Democratic candidates' two-night debate.

Former Texas Rep. Beto O'Rourke suggested at the start of his presidential campaign in March that he'd be willing to consider expanding the number of justices on the court, but he hasn't repeated that more recently. He told reporters Thursday that the Supreme Court had made "a wrong decision" but did not address questions about structural changes to the court. Earlier this month, O'Rourke's campaign released a proposal on voting rights that calls for a constitutional amendment imposing 18-year term limits on Supreme Court justices and working with Congress to create independent redistricting commissions.

Warren proposed an election security agenda this week that included a requirement for states to use independent commissions to redraw electoral districts to curb partisan gerrymandering, which opponents say dilutes the democratic process by giving the party with majority control over a state legislature the ability to skew its congressional representation.

Associated Press writers Alexandra Jaffe in Miami, Brian Slodysko in Homestead, Fla., Hunter Woodall in Manchester, N.H., Sara Burnett in Chicago and Will Weissert in Washington contributed to this report.