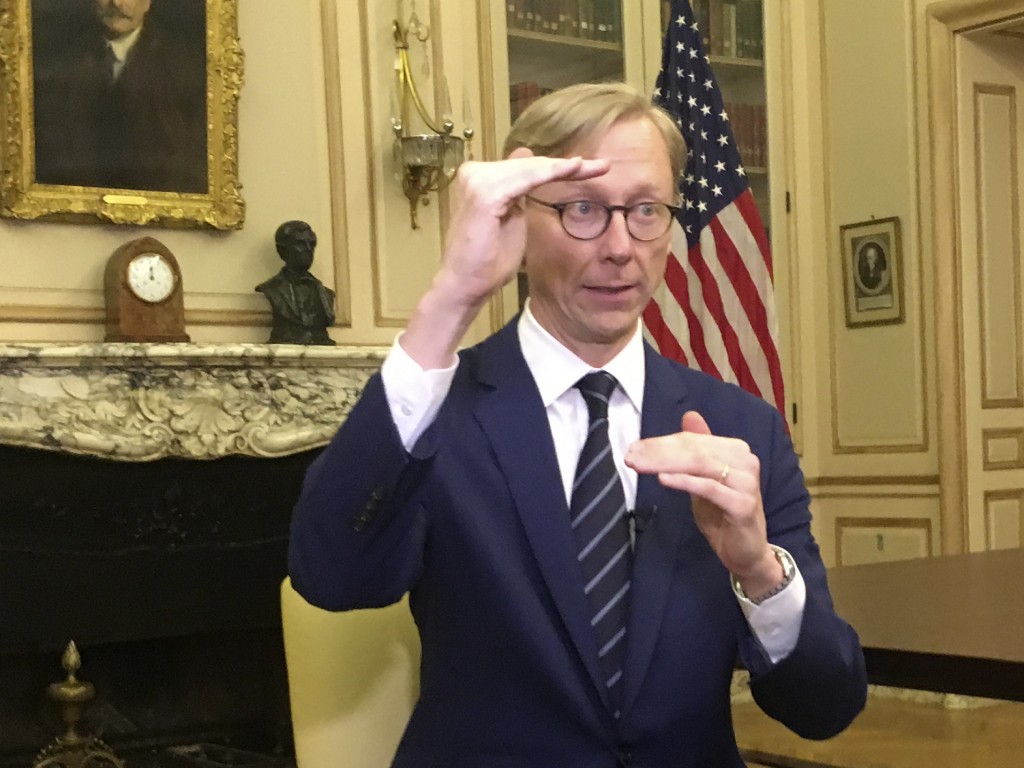 PARIS (AP) — The Latest on talks between Europe and U.S. officials on Iran (all times local):

The U.S. envoy for Iran says the United States does not want conflict with Iran — but wants to build up international defenses in the region just in case.

Special Representative for Iran Brian Hook told The Associated Press on Thursday that war with Iran "isn't necessary." He said "we are not looking for any conflict in the region," but if the U.S. is attacked, "we will respond with military force."

He said the U.S. is trying to drum up support for an international naval force in Persian Gulf, notably to protect oil tankers.

Hook estimated that Iran is still at least a year away from building a nuclear weapon. He wouldn't comment on whether Iran had surpassed a key 300-kilogram stockpile limit of low-enriched uranium, which Tehran had threatened to do by Thursday.

Hook is meeting in Paris with European diplomats who are trying to keep alive the 2015 U.N. deal curbing Iran's nuclear ambitions. Hook urged the Europeans to impose more sanctions instead.

The U.S. special envoy for Iran, Brian Hook, is meeting with French, German and British top diplomats in Paris for talks on the Persian Gulf crisis at a time when European powers are trying to save the 2015 nuclear deal struck with Tehran.

European countries want to avoid a further escalation in tensions between the U.S. and Iran and are trying to convince Iran not to leave the nuclear deal, which the U.S. pulled out of last year.

Iran has said it will break out of the nuclear deal's limit on its stockpiles of low-enriched uranium by Thursday, following the re-imposition of U.S. sanctions.

On Wednesday, Iran's U.N. ambassador urged Britain, France and Germany to take "timely" practical steps to preserve the agreement, "which is now in critical condition."