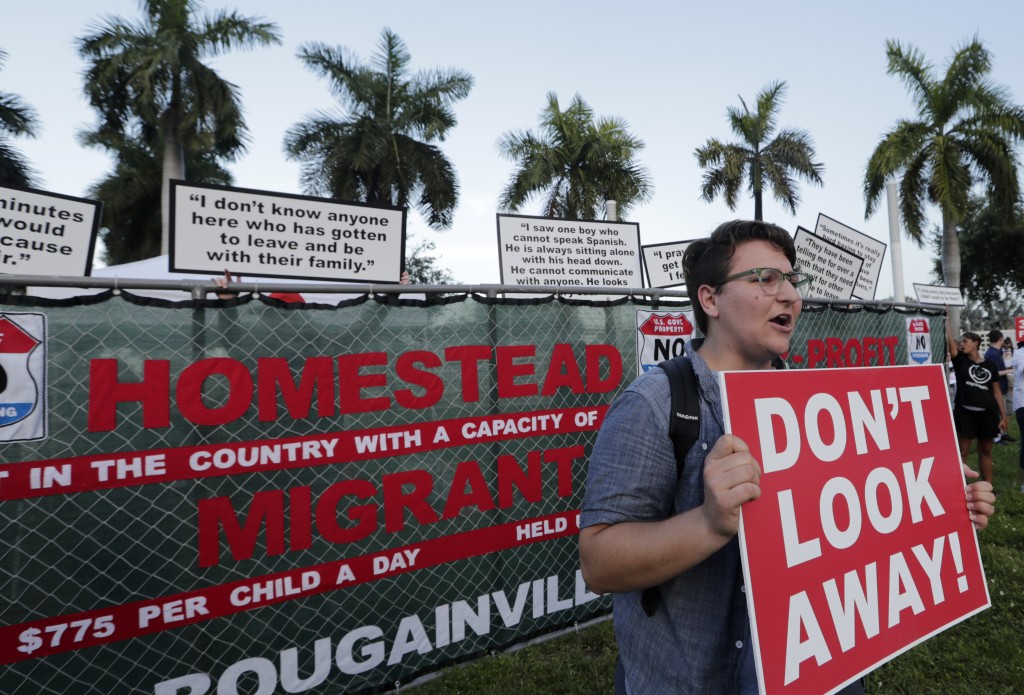 HOMESTEAD, Fla. (AP) — As a national furor unfolded over the harsh conditions immigrant children are being subjected to in the U.S., Democratic presidential candidate Elizabeth Warren climbed a step ladder and waved at teenagers being held behind a chain-link fence covered with a mesh screen.

"These children pose no threat to people here in the United States of America," the Massachusetts senator told reporters when she was back on solid ground, "and yet they are locked up here for weeks, for months, because our government is following a policy of inflicting maximum pain on families that flee here trying to build a better life."

Warren is one of nearly a dozen White House hopefuls who transformed the nation's largest child migrant detention center into a must-stop destination on the campaign trail. With presidential debates Wednesday and Thursday in nearby Miami, candidates were eager to visit Homestead to turn the facility into a symbol of the Trump administration's harsh treatment of young migrants.

That treatment could become a galvanizing issue for Americans following the drownings earlier this week of a Salvadoran man and his toddler daughter, captured by a journalist in a searing photograph.

President Donald Trump on Wednesday blamed Democrats for the deaths, saying their party refuses to fund his immigration priorities and change laws for entering the country. Democrats accuse the Republican president of preventing families from seeking asylum and of holding migrant children in filthy conditions, such as the ones found last week by a team of lawyers at a border facility in Clint, Texas.

Warren, unveiling her plan to ban private detention providers, last week called out Caliburn International, the private company behind the Homestead site, for recently appointing former White House chief of staff John Kelly as a board member. The year before Trump was sworn in, Kelly had served on the boards of the private equity firm that created Caliburn. In 2017, he became the first official to say publicly that the Trump administration was considering separating children from their parents to deter families from journeying north. Warren and other lawmakers have urged investigations into the latest no-bid contract awarded to the company for $341 million.

The teens at the Homestead facility are mostly fleeing gang violence or poverty. Although many traveled to the U.S. without family, they have described in court documents the devastation of being taken from aunts, uncles or older siblings before ending up in custody of the Department of Health and Human Services. Last year, a now-defunct policy implemented by the Trump administration led to more than 2,700 children being separated from parents, causing mass outrage.

None of the candidates has been allowed into the Homestead facility, which holds about 2,500 children.

Protesters have had a regular presence outside the facility. Drenched in sweat from the intense heat, protesters on Wednesday shouted "Homes Instead!" A mother showed up with her three young children, two of whom sat in a stroller and held signs that read "Close the camps."

Republicans accused the Democratic candidates of trying to score cheap political points with the pilgrimages to Homestead, saying they should be focused on crafting solutions to problems with the nation's immigration system.

"If Democrats actually cared about the migrant children instead of using them for political purposes, they would close the loopholes," Republican National Committee spokesman Steve Guest said.

Federal lawmakers and immigrant rights advocates have called for the detention center to be shut down, saying it is holding children for too long in "prison-like" conditions. A Clinton-era settlement generally bars the government from holding children longer than 20 days, but some children at Homestead have said they had been there for months.

Advocates also express concerns the facility is not licensed by the state. The Florida Department of Children and Families does not conduct regular inspections, saying it has no jurisdiction because the property stands on federal grounds. The federal government has waived child abuse and neglect checks on employees.

A motion filed last month in a federal court included dozens of testimonials from children who complain they cry because they miss their families and are allowed only limited phone calls. They are obligated to follow numerous strict rules, such as no touching or hugging friends, or risk prolonging their detention or facing deportation.

Advocates wrote some of the testimonials on poster board and planted them in a grassy area outside the facility on Wednesday, giving the appearance of campaign yard signs.

A boy who told lawyers he had been there for four months said he had been punched in the face by another child and had not seen a doctor. A girl told attorneys she and her sister were at the same facility but in separate areas and could see each other only once a week. Another teen was not allowed to make phone calls to family members on his 17th birthday. And many children described frustration at the process of reunification, saying they could not understand why it was taking so long to be released when they had relatives in the U.S.

Swalwell said he stopped by Homestead to show the children that officials are working to close down such facilities.

"These children are not forgotten; these children are thought about, heard about, every single day," Swalwell said. "And inside Congress there are more people than not who want to close these camps. We just need a president that would never allow a camp like this to exist in the first place."