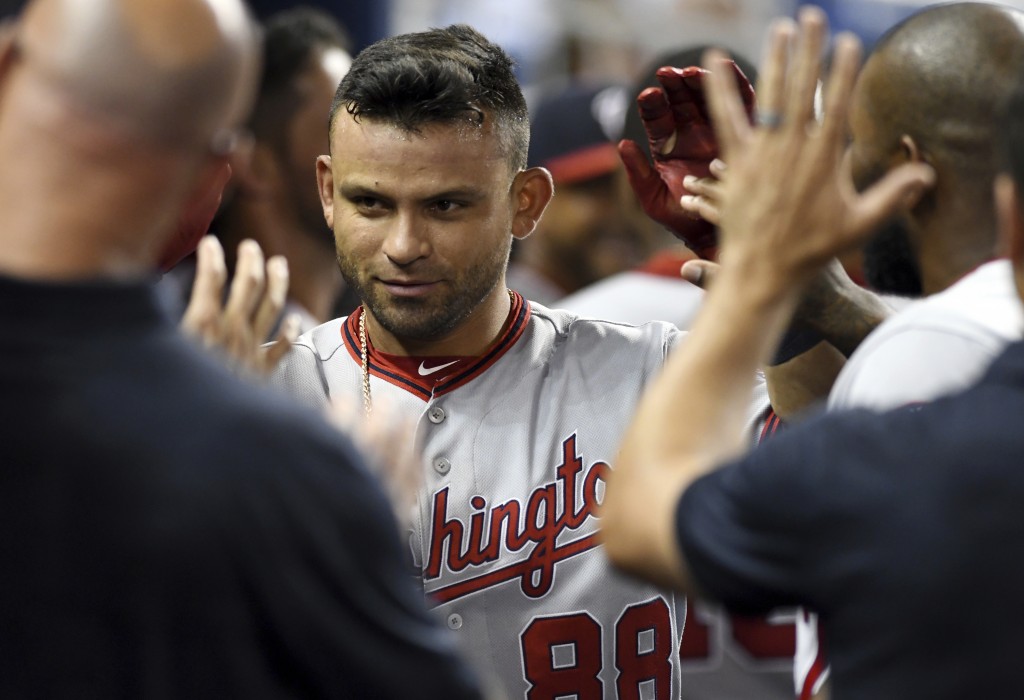 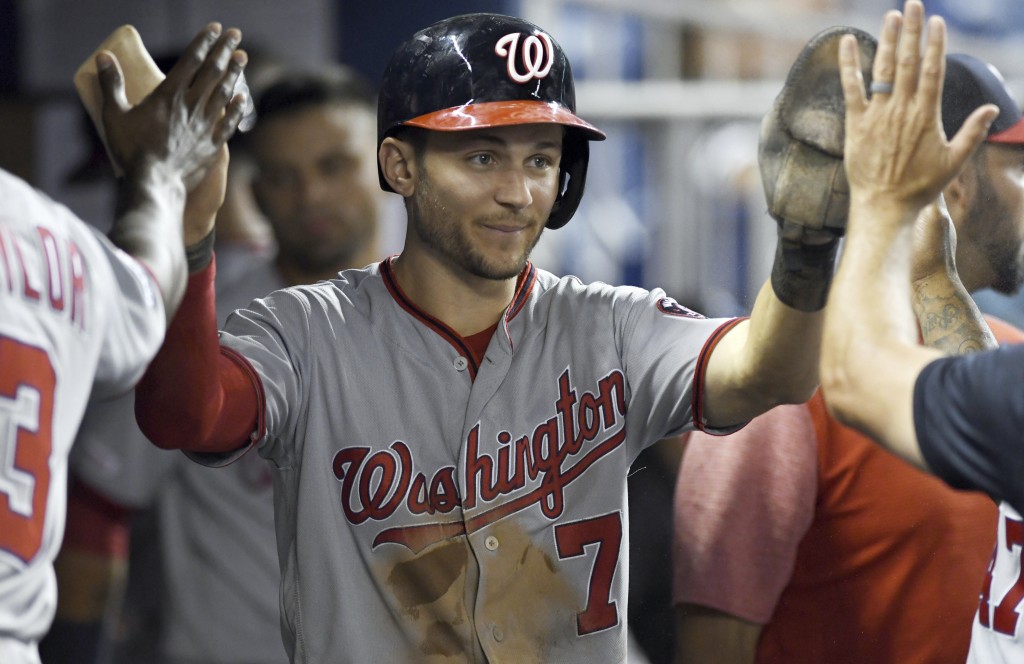 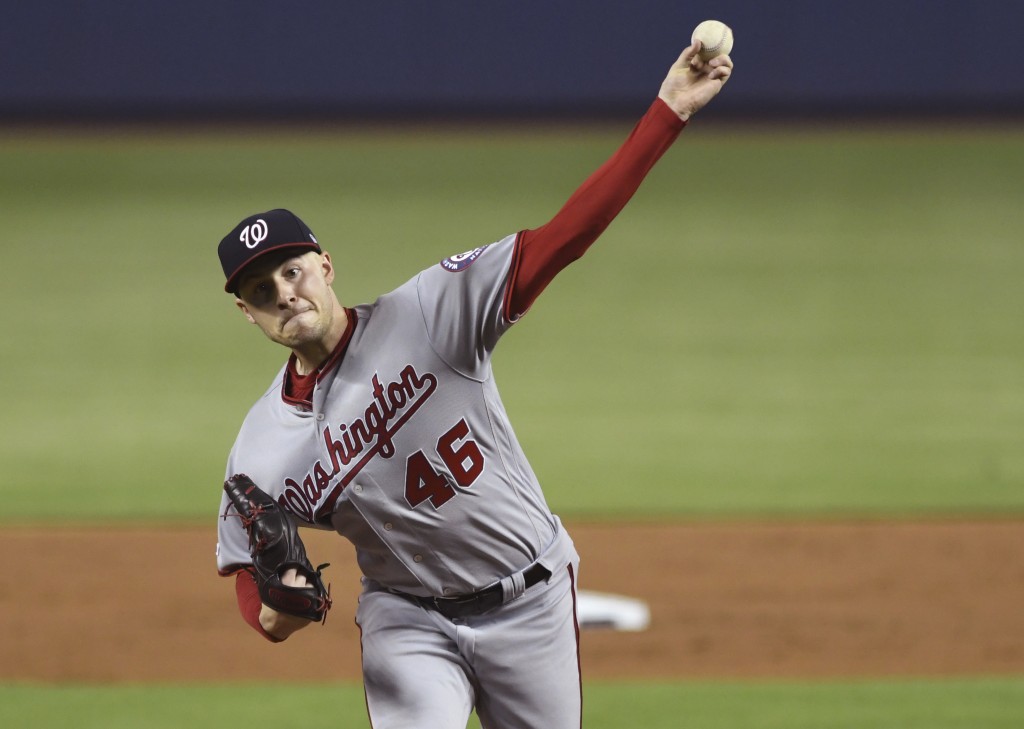 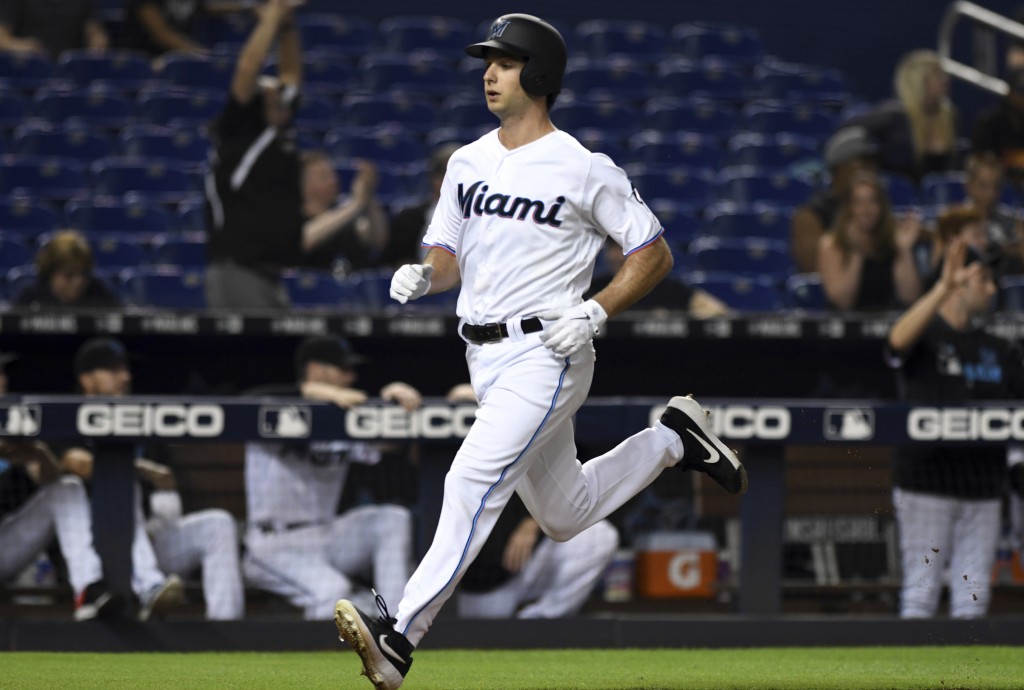 MIAMI (AP) — Matt Adams' hitting approach lately has put off any thought of the left-handed hitting first baseman being replaced by a right-handed pinch hitter in key situations.

The strategy worked as Adams hit a three-run homer in the sixth to lead the Nationals over the Miami Marlins 7-5 on Wednesday night.

"He got a ball in the strike zone and he's not missing," Martinez said. "That's the key."

Adams' shot off Chen gave Washington a 4-1 lead. Adams drove Chen's pitch over the wall in right-center for his 11th homer.

"Just seeing the ball better," Adams said. "Some very good at-bats, making them come to me, instead of changing off-speed stuff off the plate."

Patrick Corbin pitched seven solid innings and snapped a four-game road losing streak. Corbin (7-5) allowed one run and three hits, walked one and struck out nine. He struck out Cesar Puello in the second inning to reach 1,000 for his career.

"I felt good. I was able to locate my fastball," Corbin said. "Threw some strikes inside. Had a good slider throughout the course of the game. I think I had my best changeup so far this year. Just continue to build off of that."

Trea Turner and Adam Eaton had two hits each and Anthony Rendon drove in two runs for the Nationals, who have won seven of nine.

"I think we're doing everything right, showing up to the ballpark ready to work," Adams said. "We're not looking too far ahead. Guys are working hard and having fun playing the game."

Miami starter Zac Gallen had allowed one hit and retired eight straight through five before Washington chased him with a four-run sixth. Gallen allowed consecutive singles to Turner and Eaton. Rendon ended Gallen's outing with a run-scoring single to center that scored Turner.

"I kind of settled in after the second inning," Gallen said. "I would have liked to have gotten through six with less pitches, but other than that, I think I did OK."

The Nationals padded their advantage with a three-run ninth against reliever Tayron Guerrero. Yan Gomes scored on a wild pitch, Rendon hit a sacrifice fly and Turner scored on a passed ball.

Wander Suero pitched a perfect eighth before the Marlins rallied with four runs off reliever Javy Guerra in the ninth. Bryan Holaday's two-out single against Guerra with the bases loaded made it 7-2. Curtis Granderson hit a bases-clearing triple off Sean Doolittle before Doolittle struck out JT Riddle for his 17th save.

"I think ultimately when you get through the lineup a third time, guys have seen enough pitches and they don't want to get to two strikes or deep into counts," Gallen said. "They just ambushed a few pitches."

"Overall, you have to make a call with a young guy like that," Mattingly said. "Do you let him go five innings and get him out of there and leave it positive, or do you let him keep growing? Obviously, it didn't go good today but I'm sure he's going to learn from it."

The Marlins, who have lost 10 of their past 12 at home, scored their first run on Harold Ramirez's RBI single in the third. Corbin retired the first eight before Gallen reached on a single to center for his first major league hit and advanced to second on Miguel Rojas' walk.

ANOTHER MIAMI MILESTONE FOR CORBIN:

Corbin's milestone strikeout will add another memorable experience at Marlins Park. My first (career strikeout) was here so it's kind of cool," Corbin said. "It's a great memory and hopefully there's many more to come."

Marlins: IF Jon Berti (oblique) continues baseball workouts at the club's spring training complex in Jupiter, but he has not been approved for rehab assignments.

Nationals: RHP Stephen Strasburg (8-4, 3.79 ERA) will start the series finale Thursday. Strasburg looks to repeat his previous outing of the season at Miami, when he limited the Marlins to two hits and struck out 11 in a season-high eight innings on April 21.

Marlins: rookie RHP Sandy Alcantara (4-6, 3.51) will attempt to win consecutive decisions for the first time this season. In his previous start, Alcantara pitched 7 2/3 innings, allowed one run and earned the win at Philadelphia on June 21.